Review: WHEN YOU REACH ME by Rebecca Stead 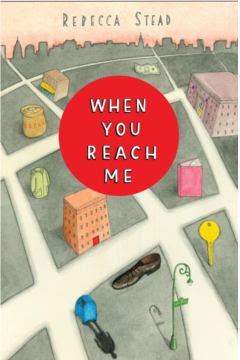 One of my new-to-me YA discoveries. Yes, one of those - jeez, there already seems to be a backlash against reading YA, I say: ignore the snide looks and comments. There are some great YA books out there. Why deny yourself? In my view there are only two kinds of books: good and bad. Read the good ones. Anyway, WHEN YOU REACH ME by Newbery Award winner Rebecca Stead, definitely classifies as better than good.

It is only the author's second book, hard to believe because it is written in such a remarkably self-assured way. Miranda, a sixth grader, leads a very 1978 sort of city life. She is a latch-key kid - her single mom works as a paralegal - happy enough in a low-key, typically twelve year old, self-contained way. She has a life-long best friend, Sal, the boy who lives downstairs. She gets along at school and like any street savvy NYC kid, she knows who, what and where to avoid walking home after school - especially the strange homeless man who hangs around her block drop kicking imaginary foes.
Then, out of the blue, Miranda's ordinary routine is disrupted when one afternoon Sal is punched by a kid on the street for no apparent reason. Thereafter, Sal, again for no apparent reason, shuts Miranda out of his life. A house key is stolen from its hiding place. A break-in occurs where nothing seems to be missing except a shoe.
Mysterious notes begin arriving for Miranda: I am coming to save your friend's life, and my own. I ask two favors. First, you must write me a letter...The trip is a difficult one. I will not be myself when I reach you.
As the notes continue, written on small scraps of paper in tiny handwriting, Miranda realizes that they contain information no one should know and that, incredibly, they mention events that haven't happened yet. When the writer of the notes begs her not to tell anyone, she doesn't, not even her mother who is busy studying to go on the Dick Clark tv quiz show, The 20,000 Dollar Pyramid.
Miranda's experiences at school ring very true, if memory serves me right. (I, too, grew up and went to schools in Manhattan.) Her interaction with friends is handled perfectly by the author, everything very much told in the voice of a twelve year old girl. You never once forget that Miranda and her friends are adolescents. They behave appropriately for that age and we never once think Miranda is some sort of precocious, mystery-solving genius who doesn't need adults in her life.
But as the continuing notes infer, time appears to be running out. Miranda must solve a series of puzzling events - her thought processes are wonderful to read - if she is to prevent some sort of tragedy happening to one of her friends. I like the way Miranda grows as a person and is not, in the end, the same as she was at the beginning - she starts to grow up, all accomplished without preaching or sentimental how-to. I like the way the author handles the inchoate selfishness of kids this age. I like how Miranda's eyes are opened to empathy in ways that seem right and true.
I was impressed by the strength of the characterizations, how in just a few lines, the author gives us a well-rounded impression of the persons in Miranda's young life - kids and adults, alike. I grew especially fond of her friend Annemarie's father, a yuppie stay-at-home dad.
Miranda's favorite book is A WRINKLE IN TIME by Madeleine L'Engle, a fact that almost immediately provides a major clue in the development of this odd little story. WHEN YOU REACH ME is one of those quiet, fast-paced reads that reaches a satisfying conclusion almost before you're aware of it.
A terrific, thought-provoking book which also qualifies as my second TIME TRAVEL CHALLENGE review.
Posted by Yvette at 10:35 AM

Email ThisBlogThis!Share to TwitterShare to FacebookShare to Pinterest
Labels: Rebecca Stead, Review, When You Reach me