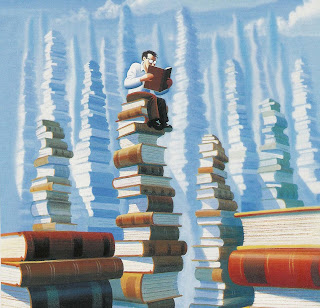 Well, three arrived yesterday so, technically those are Thursday Post Office Loot, but what the heck, the other half arrived today. So, altogether now: Friday Post Office LOOT!! Woo-Hoo!!
In various states of decrepitude, the following books (I'm not used to buying used-used, but it's a great way to go if you're not collecting, still, these books look like they've been around the block and then some. All I ask is that they don't make me sneeze - ha!), are now added to my ever-growing, dangerously tottering TBR pile. Of course it's not my fault, I blame this all on you. If I didn't read such great reviews and recommendations on all your blogs, I wouldn't now be in danger of being knocked unconscious by a falling pile of books. So, on your heads, be it. (As Shakespeare would say - or someone of that ilk.)

Books that arrived on my doorstep:

The Highwayman and Mr. Dickens - A Secret Victorian Journal, Attributed to Wilkie Collins, Discovered and Edited by William J. Palmer- An Account of the Strange Events of the Medusa Murders
This looks like a fun one. I hadn't even realized there was a series of these. Wilkie Collins is very big on the blogs right now, so I guess I'll be starting with an imposter.

Howard's End by E.M. Forster
I've been reading how this is Forster's best book and all the enthusiasm convinced me. For whatever reason, I've never read it and now seems to be the time. I like this very thoughtful review of Forster's book by Tea over at her blog.

Evening in the Palace of Reason - Bach Meets Frederick the Great in the Age of Enlightenment by James R. Gaines
A nice trade paperback. Non-fiction. The only one I bought new. I read the review on Books to the Ceiling blog, and couldn't resist. Sounds fascinating, especially since I am a big fan of Bach and know nothing about Frederick the Great.
The rest of my loot is all Michael Innes, all the time:
Hamlet, Revenge!
A Comedy of Terrors
Lament For A Maker
Appleby's Answer
Note: Can't find an artist's credit for the illustration. But I believe it was a New Yorker cover. So I'll credit The New Yorker.
Posted by Yvette at 1:06 PM