Monday Review: BRYANT AND MAY OFF THE RAILS by Christopher Fowler 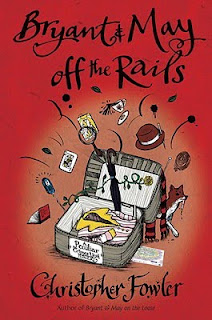 I've been meaning to write about Bryant and May but wanted to wait until I'd read Fowler's latest, the 8th in a very odd series of books - odd in a good way. From the first I have been under the spell of the eccentric Mr. Bryant and Mr. May, two old codgers basically in charge of the British Home Office's Peculiar Crimes Unit. (The hapless Raymond Land is only technically/temporarily in charge and has been for years - official limbo.) Only in England, could they come up with such a peculiarly named police unit (well, kind of police, that's never really been defined in any common sense way since The Met never seems to come into any of it) that is supposed to solve the sorts of crimes that are not only peculiar, but crimes that might affect public morale in some vague, unspecified way. Maybe crimes that might drive the British public into some sort of emotional frenzy? The very idea is funny in and of itself.

For the first two or three books in the series, I thought I was reading fantasy realism, and truth be told, I still think it. Mr. Bryant's rambling rambles on ancient British history and the evil archaeological hot spots lurking throughout London do cast a spell and make one wonder. Not to mention the extreme ages of both protagonists, I mean, Mr. Bryant is in his eighties and still on active duty. Mr. May is only a few years younger. Are we talking realism here? Nope. Though the fantasy aspect of the books turn out to be explainable in the end - well, maybe we should call the books explainable fantasy. That might do it.
There's even a sort of steam punky element to these books which is harder to define. All I can say is that Bryant and May seem to belong back in the age of steam engines and gas light, yet somehow Christopher Fowler has resurrected them in a modern day London that hardly seems modern at all. Two fractious old men to do battle with the evil and the bizarre.
I can't reveal much about Full Dark House, the first book in the series without giving away a helluva surprise that comes about midway in the book. So just take it from me: read it and you will be glad.
Okay, now to the 8th book, Bryant and May Off the Rails, which is kind of a sequel to the last book, Bryant and May on the Loose, in that Mr. Fox, the serial killer, attacked and killed a cop, escaped from a locked room, and is now roaming the London underground. To make matters worse for the Unit, another series of murders seems to have begun with the death of a make-up sales girl flung down a flight of underground steps. Add to this, a giant bat (or beetle) seen lurking in the unused tunnels, urban legends run amok, a group of London students with deep, dark secrets and a possible anarchist organization and you have a nicely flammable mix.
The Peculiar Crimes Unit is not loved by anyone except those that work in it and they only love it now and then. Basically the Home Office has spent the last few books attempting to rid itself of the pesky Bryant and May and their hardscrabble minions. But, through a bit of good fortune and some political connections, the unit has been given a reprieve - yet again. The members are even back on salary - always a good thing. Though their new offices in an abandoned old building leave very much to be desired.
But, here's the catch, there's ALWAYS a catch: in order to maintain their new status, the Unit must solve the underground murders and capture Mr. Fox before a certain deadline a week away. Same old/same old. Life NEVER runs smoothly for the Peculiar Crimes Unit.
The emotional strength of this series rests solely on the frail shoulders of Mr. Bryant and Mr. May, two older (well, one old and one older) men as different from each other as night and day.
Friends and colleagues for years - Bryant with his false teeth, disreputable clothes often held together with safety pins and the elegant May with his impeccable fashion sense and eye for the ladies - they understand and like each other because, basically, each supplies what the other is missing. especially when it comes to how they view the world and investigate crime.
My third favorite character in the series is the aforementioned Raymond Land, a poor, befuddled soul who has been stripped of any power and placed nominally in charge - temporarily. But since the 'temporarily' part has been going on for years, the guy can't be blamed for being a bit frustrated with his situation AND the bizarre working conditions, not to mention the various eccentrics on his 'staff'.
The only quibble or two I have is this: Why aren't these people armed when they're running all over London and its environs looking for killers? And why doesn't the Met back them up when it's obvious they're onto something important: like protecting the public from a serial killer?
The machinations of the British police have never been more vague than they are in these books, but maybe they have to be to make the thing work.
If you buy into this from the first, you will be hooked as I was/am.
One Other Thing:
I've read on Christopher Fowler's blog that a graphic novelization of the Bryant and May adventures is now in the sketching and writing stage. I say: hooray! AND possibly a tv show.
Another hooray!
Read more here.
Posted by Yvette at 1:25 PM

Email ThisBlogThis!Share to TwitterShare to FacebookShare to Pinterest
Labels: Bryant and May, Christopher Fowler, Review