Monday Book Review: CHARLIE CHAN The Untold Story of the Honorable Detective and His Rendevous with American History by Yunte Huang 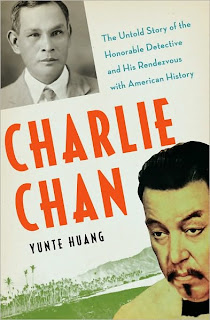 I'm going to go out on not much of a limb here and say that not everybody feels the same way I do about the fictional Charlie Chan. Some people (and I can hardly blame them for their point of view) see Chan, as portrayed by Warner Oland, Sidney Toler and a host of other white actors in the 30's, 40's and 50's as the ultimate stereotype - the Uncle Tom of an Asian American community that's had more than its fair share of distortion and tragic circumstance foisted upon it. Precisely because he was/is such a popular character Charlie Chan is probably taken as even more of an affront to racial dignity by those inclined towards this point of view.

My own personal view is based solely on the pure enjoyment I still feel while watching the Chan films. To me, Chan was, is, continues to be nothing more, nothing less than a brilliant detective who is called in to save the day when those about him haven't a clue. He is treated with respect (if not downright fear) by those around him because as I've said before, he is always the smartest person in the room. If you're going to have a stereotype, this is not a bad one to have. But that is my own personal view.
Chan is an image, a chimera. He is not real. He is, to me, the image (admittedly folksy) of rationality, of thought, of observational nuance and of brilliant deductive reasoning - Sherlock Holmes with less peculiarity. So, to my mind, if the actor playing him conveys that image successfully, he has done the job. Callously, perhaps, I don't worry about the idea that a white actor is playing an Asian yet again. I don't worry about it, because Oland and Toler, as actors, did the job so beautifully and with such dignity and style. One of the ironic charms of this book is the detailed way that author Yunte Huang reveals the nuts and bolts of both Warner Oland's and Sidney Toler's lives and their approach to playing Chan.
I have the sneaking suspicion that the author may, in many ways, feel as I do about Oland and Toler's interpretations. At the very least, he doesn't come down on Chan the fictional character, with lightning bolts from the heavens. Quite the opposite.
Yunte Huang is a scholar, a professor of English at the University of California, Santa Barbara. He was born in China and is now an American citizen. He began his literary investigation into Charlie Chan's origins a few years ago. Following a trail of clues which would lead him from the east coast, to the Midwest, to the west and finally, to Hawaii, he began to piece together the truth about Charlie Chan's non-fiction origins. In doing so, he has brought to life the not-as-well-known detective, Chang Apana (1871-1933), the son of a poor, uneducated Chinese coolie - who rose, improbably, to become a respected member of the Hawaiian police force. At a time when the very idea of a surge of Asians immigrating to this country brought terror into many an American's jingoistic heart and infamous anti-immigration laws were spawned in fear and hatred, a mid-western writer named Earl Derr Biggers (1884-1933) also improbably, created a Chinese detective character whom this very same public (paradoxically) would clamor to read.
According to historical record, it is a fact that author/creator Earl Derr Biggers and Detective Chang Apana did, indeed, meet. It is probable fact that Biggers had read of Apana's heroic exploits at some point early on; Chang Apana's fabled round-ups of Hawaiian miscreants while flashing a bullwhip, having made the stateside papers and possibly firing the imagination of a writer in search of a character.
In this luxuriously well researched and illuminating account (complete with photos), Yunte Huang clearly defines the confluence of lives and times of various characters who seemingly appeared at just the right time in history (literary happenstance), to help one way or another in the formation of the iconic fictional detective Charlie Chan.
Huang writes with a clear and concise voice, often deliberately dipped in irony but never bristling with anger. He shows the ugly nature of prejudice in well brought out historical episodes tucked into the story to help explain the state of the country in the early part of the 20th century. I was especially impressed, while reading, with the non-judgemental tone of Professor Huang's writing. Though I'm sure he has his own outraged ax to grind - don't we all? - it is never apparent in this book.
If you are a history buff and/or fan of Charlie Chan, you will enjoy this book. Even if you are not as familiar as I am with Chan the fictional detective, Yunte Huang's book is a remarkable, eye-opening adventure detailing as it does, parts of our shared American experience which many school books, to our children's detriment, do not bother to explain.
Here's a link to my earlier post on the Charlie Chan movies and a link to the books by Earl Derr Biggers, available in Felony and Mayhem Publishers editions.
Posted by Yvette at 12:41 PM