Scariest Scene EVER in a Movie? 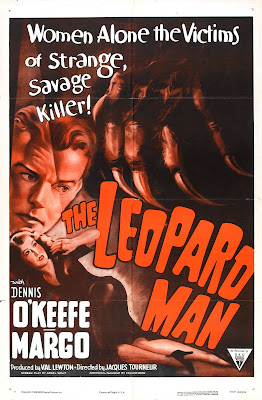 I don't watch horror films, never did, even to this day. Never got used to watching really creepy, scary stuff. Still don't like it. But when I was a kid, The Leopard Man, a second rate, black and white B movie about a killer stalking a small town on the Mexican border, truly outraged and frightened me. (Anger is part of the fright experience - don't you think?) Of course I was sitting in a dark theater at the time. But for months afterwards, I had nightmares.
Just the thought of the film still, to this day, gives me the serious creeps.

I know that compared to today's movies my choice may seem a bit tame, but let me tell you, the scene I'll describe, impressed the bejeezus out of me. I think the stuff that scares us as kids is more forceful and remains imprinted forever. Memory makes everything scarier, I think.

What the movie's about: Strange doings in a small desert town. Someone has begun killing women and the wary populace assumes it's a monster of some kind because the wounds on the bodies are jagged and claw-like. Well, the local night club just happens to have recently introduced a live leopard into one of the acts.(Don't ask, I don't know who though this one up.) So people are naturally suspicious. Though the leopard is kept in a supposedly safe place.

Anyway, long story short: the leopard, of course, escapes one night (you kind of knew that was coming), and begins roaming the countryside.
Switch to interior of small village house: A young girl about 12 or so is being sent to the store to pick up something or other that the mother and the rest of the family need for the evening meal. The store is only a few blocks away but by the time she returns it will be dark on the streets. She doesn't want to go because, very rightly, she is afraid. Stories of the killer hacking up women are getting around. But nobody knows yet that the actual leopard is on the loose.
The family makes fun of the girl and think she's overreacting. The mother insists she go to the store so they can finish making supper. They are annoyed with the girl for causing a fuss and accuse her of being lazy.
The girl is bullied into going to the store and, of course, on the way back in the dark she realizes she's being stalked so she runs home. When she reaches her front door she begins pounding on it.
Switch to the interior of the house again. The family hears the loud knocking and the girl's frantic efforts to open the door and think she's joking, trying to teach them a lesson - obviously, these are very stupid people. Well, when the girl begins screaming at the top of her lungs they finally realize something is really wrong and they run to the door which, of course, jams when they try to open it. They can hear loud thuds, growls and screams from the other side.
We SEE NOTHING of the horror outside, we're inside with the now finally frantic family, but we can HEAR a dreadful racket. Before the door can be opened, the camera pans down to the floor and we see blood seeping from under the front door onto the living room floor. The screams have stopped.
Nightmare city for me. Never could watch the film again until one day I saw the video in Blockbuster and decided to take my psychological life in my hands and try and watch it.
The scene I'd remembered is actually worse in memory than in actuality. But it still gave me the creeps.
So, what's your scariest movie scene memory?
(Thanks to author J.D. Rhoades for giving me the idea to pose this question.)
Posted by Yvette at 10:09 AM