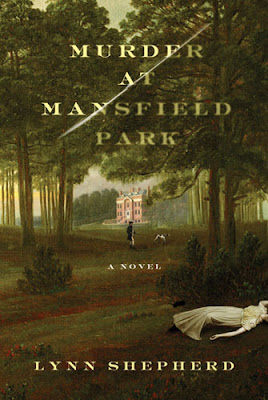 Despite the dramatics of my last post, I am back to reading today. All's well that ends well. I remain philosophical about this whole 'playing catch-up' business - or, anyway, as philosophical as I'm likely to get. Luckily for me, I've just finished reading a purely terrific book. (And doesn't that usually cure all ills?) I wasn't going to review the book (you'll see why in a second), but I think I will do so, despite my hesitation.

MURDER AT MANSFIELD PARK by Lynn Shepherd is a wonderful literary conceit. Shepherd takes Jane Austen's Mansfield Park characters and storyline and twists them around to suit the requirements of the genteel mystery novel. As a debut, especially, it is astonishingly self-assured.
My initial hesitation to review is based on the fact that I've never read Jane Austen's Mansfield Park. I can't make comparisons or point out strengths and/or weaknesses between the two books. I believe that those of you who've read the Austen original may find MURDER AT MANSFIELD PARK even more entertaining and deliciously wicked than I do. But having said that, I will add that my review is, necessarily, based solely on my reading Shepherd's book as a stand-alone mystery - the characters and locale all new to me.
My personal Austen favorites are: Pride and Prejudice and Persuasion. I'd given up, a while back, attempting to read Austen pastiches because, in general, the modern-day writing suffered so in comparison to the original. Well, how could it not? Perhaps I was expecting too much. But my feeling is, if you're going to do something, i.e. replicate a certain style of writing, do it well or not at all.
Author Lynn Shepherd has a doctorate in English literature from Oxford University, so I expected a lot from her attempt at doctoring Austen. I am happy to say, as far as I'm concerned, she has delivered the goods. She gets the cadence of the Austen style. The terminology, formation of sentences and dialogue appear, in her 21st century hands, authentic enough. I had a fine time reading this book though I wasn't as familiar with the characters as others might be. I'm thinking now that, at some point, I should probably go ahead and read the original Mansfield Park though I've heard nothing but uninspiring comments about the insipidness of its 'heroine', Miss Fanny Price.
In this version of events at Mansfield Park, Miss Fanny Price becomes a murder victim - wishful thinking, I expect. She is, in this incarnation, a spiteful, willful young woman who will be in possession of a great fortune upon her coming-of-age birthday, just before her untimely death.
As you may imagine, murder in the pleasant English countryside of well-to-do Austen-imagined households throws an entire cast of characters into turmoil. Fine manners are one thing, but manners are hard to maintain when it becomes obvious that a murderer lurks among the genteel trappings.
The heroine of the piece is the less well-to-do Mary Crawford, neighbor to the Bertrams of Mansfield Park, sister to the rakish landscaper Henry Crawford, and as stalwart, intelligent and even-tempered a young woman, as Fanny Price is not. Mary, unconventionally, works with the astute thief-taker Charles Maddox, who has been called in from London, to try and find Fanny's murderer.
MURDER AT MANSFIELD PARK is, in general, a very intime sort of murder mystery, taking place as it does in a well regulated locale, a significant country house peopled by family and a house full of servants. If it had, indeed, been written during Austen's time, it would have been viewed as the first official mystery/detective story - an unlikely precursor to Agatha Christies's country house mysteries (or even earlier, Wilkie Collins) written during the 1920's and 30's. The ingredients are all there and Lynn Shepherd manipulates them very well. I truly enjoyed reading MURDER AT MANSFIELD PARK, this story - I hesitate to call it a pastiche, since it stands very well on its own - is an excellent historical mystery. I wish we may read more about the canny thief-taker Charles Maddox, in future novels.
See Lynn Shepherd talk about her book, here. Thanks to Jane Austen's World for the initial link.
Posted by Yvette at 12:35 PM