The Secret of Chimneys by Agatha Christie 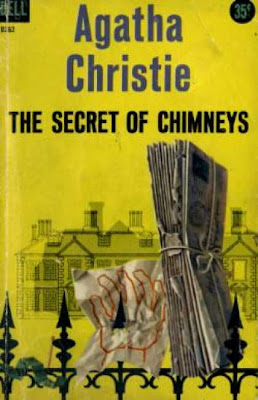 I've been looking at my little old copy of Agatha Christie's book, The Secret of Chimneys, the one with the rubber band holding all the pages together and wondering if it might not be time to get a new copy. The one I have is the same as in the picture above, the yellow cover - 35 cents when new, a million years ago. I hang onto my books.

I reread this (for the umpteenth time) a couple of weeks ago on one of those chilly, rainy weekends when the brain needs the massage of the comfortable and wrapping yourself in fleece is not enough. I wasn't sure if I was going to review this, one of my favorite Christie books, until today. All of a sudden, I felt like talking about it, maybe because it's suddenly chilly and looking like we're in for it tonight.
The Secret of Chimneys is a very early book of Christie's, written in 1925 and as I've said, remains one of my favorites. It is, really, a fairy tale. That's basically how I've always thought of it. Oh yes, it's a mystery with the requisite dead bodies strewn here and there, but it is the very preposterous-ness of the plot that puts it in the realm of fairy tales. I'm even willing to state, going in, that parts of the story (bits and pieces of lingo and, certainly, the carelessly class conscious attitudes of the characters) probably make little sense to someone living in 2010 and reading the book for the very first time. All I can say is: make an effort, you will be won over by the sheer joyousness of the totally improbable plot.
I have rarely read a book that is just so much damn fun to jump into. Agatha Christie must have been in a happy and spirited frame of mind when she wrote this. From the haphazard opening when certain mysterious events are rapidly set in motion by two friends accidentally meeting on a South African street, we are immediately plunged head long into an adventure which finally culminates in England, when a dazzling stolen jewel is recovered from its hiding place and a long lost and unlikely king is placed on the throne of a colorful Balkan country where assassination of nobles and Presidents is part of the national character.
Chimneys is the Stately Home in question, a place where the rich, the grand, the eccentric and the political used to gather on long weekends to drink, eat excessively, make assignations and plot the course of the country - and of course, every now and then, when a dead body turned up, they solved a mystery.
No Hercule Poirot or Miss Marple this time out. The only familiar cop is the stolid Chief Superintendent Battle of Scotland Yard who turns up after the requisite murder victim (visiting Chimneys under an assumed name, of course) is found dead in a downstairs gallery.
This book features one of the more attractive female characters created by Agatha Christie - our heroine: Virginia Revel. A rich, young widow who oozes the kind of devastating charm and elegance that makes life, generally, so much easier. Blackmail and a pack of letters ostensibly written to a lover are at the center of her involvement in the caper. But let's back up a bit.
It is rather difficult to synopsize (I invented the word) the plot as it is really, a mad, harum-scarum thing. Best I can do: A very hush-hush and delicate political maneuver is about to go down involving a kingly restoration, oil concessions pitting American interests with British, the quashing of some embarrassing memoirs, and even more politically embarrassing, the possible recovery of a historically significant diamond known as the Kohinoor. All this is about to take place at Chimneys under the noses of family, invited guests, children, a large staff of servants, governesses and assorted childhood nurses.
The hero: Anthony Cade (or is he King Victor, famed jewel thief just lately out of prison?), feckless adventurer who stumbles into the plot primarily because he is the type to find adventure, literally, wherever he goes. A very attractive, very tanned young man, having just stepped off a boat from South Africa - a handy sort to have around. The Secret of Chimneys fairly pulses with types, but I never minded in the slightest. The chapter where Virginia Revel makes an instant decision based on appearance and instinct and brings Anthony into the caper of the dead blackmailer is absurd perfection.

Supporting players: the utterly wonderful Lord Caterham (my favorite character in thebook), titled owner of Chimneys. He is a hapless widower who laments his loss of privacy and the fact that his home has been commandeered by a minion of the government, the officious George Lomax, a budding windbag of a politician with the annoying habit of gripping a man's lapels, making escape impossible.
There was nothing that bored Lord Caterham more than politics - unless it was politicians. Hence his impatience under the continued eloquence of George Lomax. A robust man, George Lomax, inclined to stoutness, with a red face and protuberant eyes, and immense sense of his own importance.
"You see the point, Caterham? We can't - we simply can't afford a scandal of any kind just now. The position is one of the utmost delicacy."
"It always is," said Lord Caterham, with a flavor of irony.
"My dear fellow, I'm in a position to know."
"Oh, quite so, quite so," said Lord Caterham, falling back upon his previous line of defense.
"One slip over this Herzoslovakian business and we're done. It is most important that the oil concessions should be granted to a British company. You must see that."
"Of course, of course."
"Prince Michael Obolovitch arrives at the end of the week, and the whole thing can be carried through at Chimneys under the guise of a shooting party."
"I was thinking of going abroad this week," said Lord Caterham.
"Nonsense, my dear Caterham, no one goes abroad in early October."
"My doctor seems to think I'm in rather a bad way," said Lord Caterham eyeing a taxi that was crawling past, with longing eyes.
Caterham eventually gives in, the house party is set and events move forward. What I like best about Caterham, the Ninth Marquis of Caterham to use his proper title, is his sense of noblesse oblige, his diffidence, his gentle manners, his obliviousness to the 'real' world outside his own sphere of comfort. He is a peer to the very tips of his fingers though not, perhaps in appearance - he was a small gentleman, shabbily dressed, and entirely unlike the popular conception of a marquis. He had faded blue eyes, a thin melancholy nose, and a vague but courteous manner. He would also argue that he hates the very idea of having a title. If only his elder brother hadn't died, he laments.
His grown daughter is nicknamed Bundle (she will make her bow as heroine in another book, The Seven Dials Mystery, I think, along with Bill Eversleigh, who serves as all purpose dogsbody in this story). Bundle is a name I've loved since I read this book as a young girl. I would love to have been known as 'Bundle'. Luckily for me, cooler heads prevailed. Bundle adores her father and since she is such a terrific character-in-the-making herself, it's good enough for me.
Lord Caterham is my idea of an ideal peer of the realm. One of several reasons I keep going back and rereading The Secret of Chimneys. I find him entirely adorable. PLUS he's indecently rich, absent-minded, tolerant and totally dependent on his butler, Tredwell, to handle anything untoward. I'd marry him in a second. Even as a kid I recognized a good catch when I saw one.
Pick up a copy of this book when you get a chance (although you'll pay considerably more than 35 cents, I'm afraid) and have yourself a great time. If you need cheering up, all the better.
As an aside:
Events and characters in this book very much remind me of the 1990's classics, The Affair of the Blood-Stained Egg Cosy and The Affair of the Mutilated Mink, both by James Anderson. Or I should say that the events in Anderson's two books, admittedly parodies of the genre, remind me of the much earlier, Christie book. A nice weekend's reading, if you're feeling out of sorts, would be: The Secret of Chimneys followed by Anderson's two books. You couldn't help but feel exhausted by good cheer by Sunday evening, as if you'd had a high old time at some English country house without once having left your comfortable chair.
Posted by Yvette at 4:33 PM