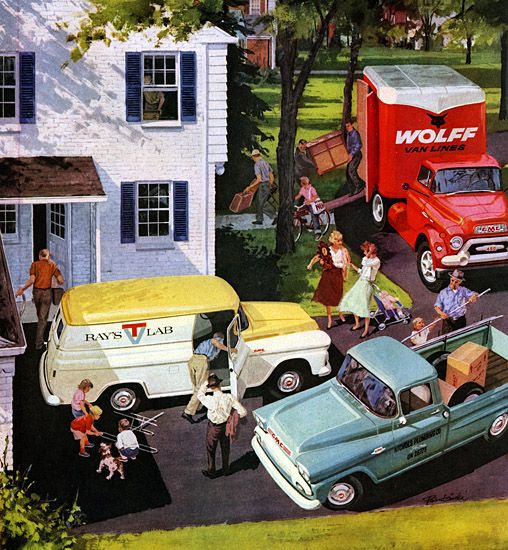 Yeah, it's been a while. Lots of stuff going on in my real life, so please bear with me. And apologies for not turning up sooner. I know some of you guys were concerned.

Rocky and I made the big move (end of February) from New Jersey to North Carolina (not the most socially insightful state as you may know from recent headlines, but hey, nothing's perfect) to be closer to my family (and I am - just 12 minutes away now). When you become a grandma, it's all about those little kiddies and being near them. Can't help it, that's just the way it is. Ask any grandma.

The move went fairly well with nary a glitch except that on The Big Day it was my daughter driving the moving truck instead of my son-in-law who was sick with the flu back in N.C. He had planned to fly up and drive the large rental truck down, but plans had to be changed at the last minute. I asked my daughter if she'd ever driven a big truck before and she said no, but she'd driven a big pick-up. Good enough. She was amazing. We made it down to N.C. with no problems - with an overnight stay in Virginia at a Wyndham motel where in the morn extra biscuits and bacon got us back on the road headed south.

We drove a total of about 10 or 11 hours all told, and were lucky that all the way down there was little traffic to hold us up. Yeah, my daughter, me and Rocky packed into the not-exactly-spacious front cab of a Budget 16 footer rental truck. Lots of laughs. Ha!

But let's back up a bit.

You know how this all came about if you've read my 'I'm Moving!' post so I'll try not to repeat myself. I began packing the very day (the very night) I got back up north to N.J. (from visiting my family over the holidays) on January 9th - give or take a few hours - and never stopped packing until the day we moved on February 26th. Yes, it's true. Don't ask me how I did it all by myself (with some lugging to the landfill help from my brother and later, my daughter) because I just do not know. I guess if you really want to do something, you'll do it, age and sore muscles be damned. Plus, when I was working, I was used to impossible deadlines.

But that's now become part of the continuing problem: I'm truly (and now have the time to be) exhausted and it's all - FINALLY - catching up with me. Oh yes, and in between, I had a bad chest cold. But the way I look at it, it could have been the flu, so I was lucky. I just kept telling myself, 'You can do it.' And I did.

I realize I'm sounding very self-congratulatory here, but dammit, I am proud of myself.

There's still unpacking to finish (it's going to take me at least another few weeks until I get everything put away or, at least, put somewhere). But as Joe Pike was once heard to say, "I didn't know it was a race." Nope, not a race. I'll just take my own sweet time and do things at my own sloth-like pace.

But there's still this:

No matter that I gave away TONS of stuff - half my library and most of my winter clothes - AND left behind furniture and other assorted knick-knacks, I still brought too much stuff! Somehow,
things I thought indispensable suddenly became dispensable once down in my humble little abode. Isn't that always the way?

And as for the blog:

Despite all the heavy lifting and packing and unpacking, I'm still managing to find time to read. No need to worry, Yvette will find the will to read in the middle of a hurricane. So there are plenty of good books waiting for us to chat about. And yes, I was gone from my blog a good long time, but part of the problem was that I couldn't seem to sign back on once my computer was set up. It took a while until my daughter found the problem. (In addition to being an ace truck driver, she's also a computer whiz as I may have mentioned over the years.)

Worst part of my problem: exhaustion. The sheer will to post had evaporated over these few weeks and I debated not coming back to blog-land at all. But then, I realized I'd miss you guys and what the heck, I'll just take my time coming back. Little by little. If I'm not around much at first, please know it's just that I'm so darned tired. While there's still one more box to unpack and belongings to sift through, I won't be the old Yvette for awhile.

My family is well, my grand-kids are superbly adorable and my brother and his wife are thinking of moving down here (from NJ) as well when my sister-in-law retires. It seems that everyone who comes down to this area falls in love with it. It's a special place. Most of the people here are from someplace else (I've already met a few New Jersey ex-pats) and they all tell the same story: came to visit, decided to stay.

Yeah, politically, N.C. is not the most enlightened of states, but then I wasn't happy with the governor of New Jersey anyway. And I lived for 25 years in a county with a Republican congressman and somehow, survived. So, we'll see.

P.S. Yes, believe it or not, Rocky has been very good - so far. He sends his greetings - NOT!

Check out the book listings on the left hand side of my blog and you'll see what I've been reading lately.