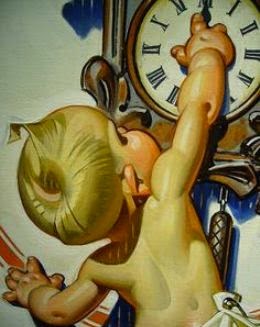 Wishing my family and all my friends, a VERY HAPPY NEW YEAR!
Posted by Yvette at 4:03 PM 22 comments: 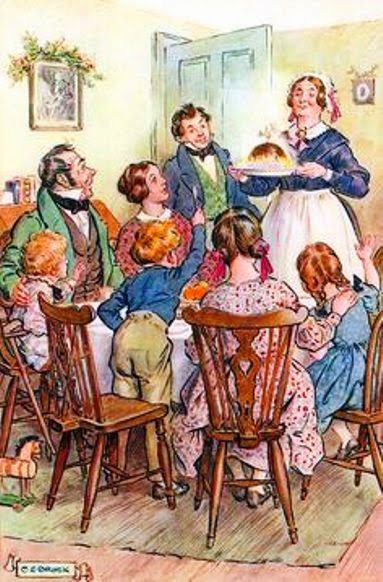 MERRY CHRISTMAS! May God bless us every one.
Posted by Yvette at 12:30 AM 20 comments:

Yet Again: My Favorite Quirky Christmas Movies (Heavy on the Quirk)

With your indulgence, this is a revamp of previous Christmas film posts. Nothing new is ever added, I stubbornly hold to the belief that nobody knows how to make this sort of movie anymore. 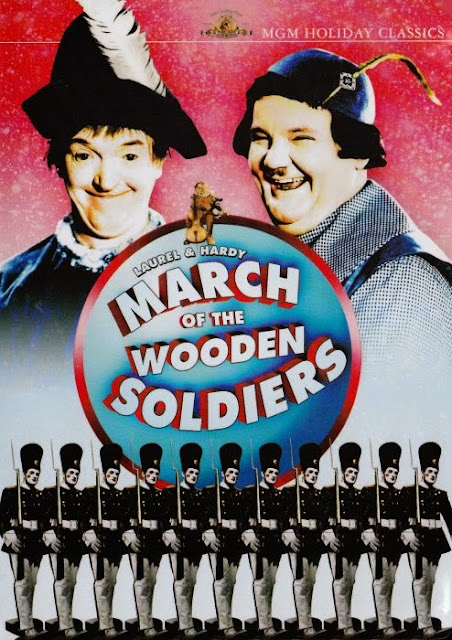 1) MARCH OF THE WOODEN SOLDIERS (1934) is watched religiously by me every year either at Thanksgiving or Christmas. It is ritual. I know the songs by heart and can often be heard  humming along tunelessly with the music and if I'm really in the mood, I'll sing the words too. When it comes to this movie I am incorrigible. Laurel and Hardy, Santa Claus, Little Bo-Peep, A cello playing Cat, A bomb throwing monkey and Boogeymen - what more could you want?

My original review for you purists out there.

Do not, whatever you do, fall for the 'colorized' version, it is blech. Stick to black and white, if you can find it. 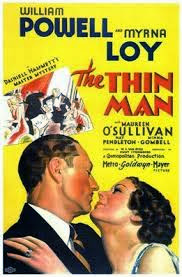 2) THE THIN MAN (1934) Obviously '34 was a good year for Christmas movies. The very suave and sophisticated Nick and Nora Charles solve a murder or two, drink endless martinis, kibbitz in Manhattan's best eateries and dives, and celebrate Christmas with a hotel room full of wise-cracking NY riff-raff. Again I ask, what more could you want? And when was the last time you saw a movie featuring someone named Minna Gombell? I ask you.

Poor hapless Minna looks perpetually shell-shocked. I think it's the eye-makeup. Elizabeth Arden it ain't. And note that her very icky gigolo-hubby is played by none other than the still-to-be-suave Cesar Romero. 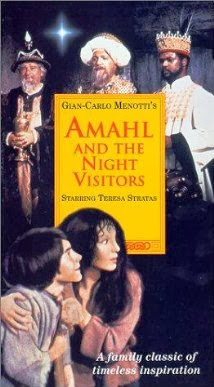 3) AMAHL AND THE NIGHT VISITORS (1951) If you can find this early black and white television version, then this is the one to watch. A short opera written for television by Gian Carlo Menotti (who was one of the directors), it remains fixed in my mind and heart as sheer Christmas perfection.

Three Wise Men (Three Kings, actually), following their star, must stop and rest for the night and choose the very humble abode of a desperately poor widow and her young, mischievous, handicapped son who hops about on a crutch and can't help getting into trouble. He's very inquisitive, you see.

There's no cuteness though, it's all just glorious singing to glorious music as well as some dancing villagers and, near the end, a miracle. If you've never seen this, you're in for a wonderful treat. This unique production is one of several reasons I am a life-long opera fan.

4) LADY ON A TRAIN (1945) starring Deanna Durbin as a ditzy society babe, out from under the watchful eye of her indulgent dad, just in from the coast to spend Christmas in NY with her aunt. But as the train pulls into Grand Central the deb spots a murder from the window of her compartment and the hunt is on for a killer. (What else is a nicely bred young lady to do in NYC on Christmas eve?)

There is a cast full of character stalwarts from the forties, including Edward Everett Horton (with, truthfully, not much to do), David Bruce, Ralph Bellamy (at his ultra creepy best), Dan Duryea (equally creepy, he just can't help himself), Elizabeth Patterson, Allen Jenkins and George Coulouris, there to prop up Miss Durbin who does a creditable job playing the ditz who drives everyone crazy.

She even gets to sing Silent Night (in close-up) over the phone to her dad out in California.
Here's my original review, if you're so inclined.

5) THE MAN WHO CAME TO DINNER (1942) starring Bette Davis, Monty Woolly, Reginal Gardiner and Ann Sheridan in a loony tale of a famous New York radio personality/curmudgeon who is forced by circumstance - a slip and fall incident - to spend the holidays in the home of a 'normal' small town midwestern family (with money) whose lives he upsets in a hilarious and often fiendish variety of ways. This is SO much fun and as the quips and insults fly by quickly - you gotta' pay attention. Bette Davis plays quietly sweet (if gently acerbic) very well as the curmudgeon's secretary and general factotum.

Note: An adorably engaging impersonation of Noel Coward by Reginald Gardiner almost steals the movie from the ferocious Monty Woolley whom I adore.

Here is fellow movie maven Dorian's take on THE MAN WHO CAME TO DINNER. Hint: She loves it as much as I do.

LADY IN THE LAKE starring Robert Montgomery, Audrey Totter and Lloyd Nolan. Based on Raymond Chandler's book. Spend Christmas with Phillip Marlowe and solve a murder, meet a gaily dressed gigolo and solve a murder or two while you're at it. My original review 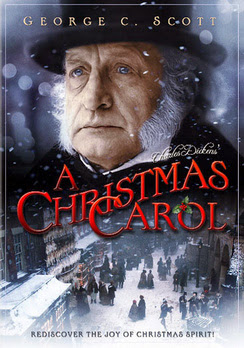 Of course there are many versions of Dickens' A CHRISTMAS CAROL, but this year I'm choosing the one originally made for television and starring the superb American actor George C. Scott, (he had that curmudgeon face down pat). Scott's English accent isn't very good, but it doesn't seem to matter, it all works for me. He really is wonderfully touching. 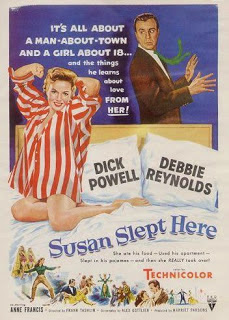 SUSAN SLEPT HERE starring Dick Powell, Debbie Reynolds, Anne Francis, Glenda Farrell and Alvy Moore. A saucy comedy in which Debbie plays a seventeen year old truant who takes an improbable detour at Christmas - brought about by the machinations of two soft hearted L.A. cops. Susan aka Debbie, lands in the apartment of man-about-town screenwriter Dick Powell whose dragon queen fiance is played to the absolute hilt by an all but snarling Anne Francis.

Yes the age difference between the two principals is a bit of a stretch, in truth, Powell is old enough to be Debbi'es father, though on screen he's supposed to be in his late thirties - yeah, right. Well, Susan does turn 18 during the course of the story so that makes her legal - just. There are no real love scenes so not to worry. It's all just light and frothy Cinderella fun. But if you're of a serious turn of mind, then skip it. 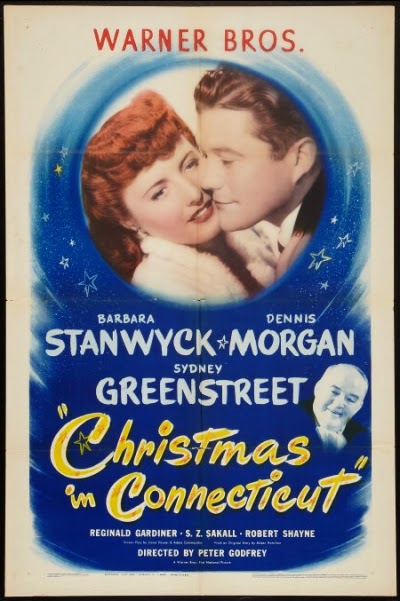 CHRISTMAS IN CONNECTICUT starring Barbara Stanwyck , Dennis Morgan and Sydney Greenstreet. Barbara Stanwyck plays Elizabeth Lane, a magazine food writer whose warm-hearted articles about hubby, baby, home and hearth on a Connecticut farm are followed religiously by women all over the country. The only trouble is that Liz is single, doesn't know how to cook, and has no real love for the country which is just as well since she doesn't really have a farm in Connecticut.

Over Christmas she is forced to make this fantasy life come true for her boss, publisher Alexander Yardley (Sydney Greenstreet in a rare benign performance) who insists on spending a real old fashioned Christmas with Liz and her 'family' as they welcome home a war hero played by Dennis Morgan. Uh-oh.

A Christmas delight of confused identities and happily ever after.

Where are WHITE CHRISTMAS and HOLIDAY INN? Not quirky enough. Besides I'm not a fan of Bing Crosby.

I've been ill - spent Thanksgiving bed-ridden and feeling very 'woe is me' - you know how that goes. I'm slowly getting back to normal, but today's 'Forgotten Film Tuesday' post will probably not appear until tomorrow or the day after and at that it will be in the guise of My Favorite Christmas Films.

I'll follow that up next week with a list of My Favorite Books of the Year and then that will be it for December and into January. I really do need some time off to begin my new venture (if my freakin' health will allow it). That is, a brand new portfolio of art which I'm very excited about.

So I guess that means I'm un-retiring.

But ladies and gents, I'm a slow-worker. I need time and 'space'. Something has to give and that will be my blogging duties, at least for the near future.

I'll still be around, just not as regularly.