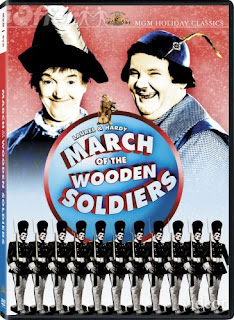 What can I say? Not forgotten by me. But just in case you might have overlooked it...

MARCH OF THE WOODEN SOLDIERS (aka Babes in Toyland) is my favorite Christmas movie (next to A CHRISTMAS CAROL). 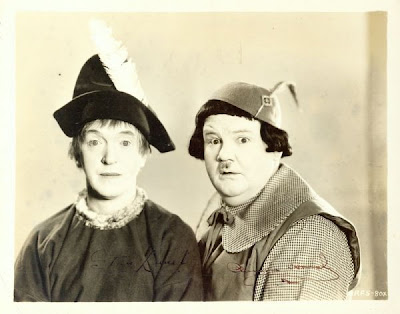 Tuesday is Overlooked (or Forgotten) Films day around here. This is the weekly meme hosted by Todd Mason at his blog, SWEET FREEDOM. Don't forget to go take a look and check out what other films, other bloggers are talking about today.

Christmas just wouldn't be the same without Stan Laurel and Oliver Hardy helping to save Toyland and vanquishing the vile boogeymen forever. Laurel and Hardy (or Fat and Skinny as a friend of mine called them growing up) are one of my favorite comedy combos of the past. Most especially their work in this wonderful movie.

One of my favorite things about Oliver Hardy is the way he has of always looking at the camera - his expression a kind of shared exasperation. As if he and the viewer are in this together. LOVE it.

Ever since WPIX, Channel 11 in NYC began showing the movie around the Holidays many, MANY years ago, my family and I have been hooked on this strangely endearing Hal Roach production based loosely on the operetta by Victor Herbert.

Needless to say, I prefer the purity of black and white even if the 'colorized' version is the one more readily available for purchase. To that I say: Blech! 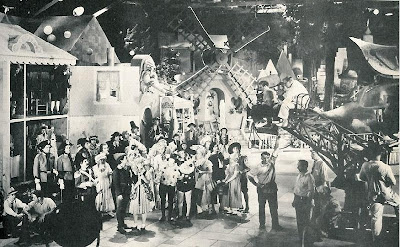 All is not sweetness and light in the kingdom of Toyland. Stanley Dum and Ollie Dee (Laurel and Hardy) have lovingly promised their landlady, Mother Peep (Florence Roberts)  to come up with the final mortgage payment on her shoe (There was an old lady who lived in a shoe...Get it?) so that the evil owner of the house, the icky Barnaby (Henry Brandon aka Henry Kleinbach) won't foreclose and kick the family out on the street. 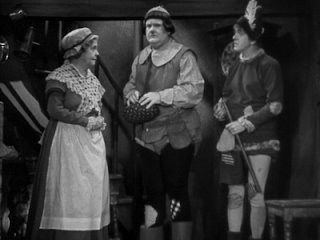 But wait, creepy Barnaby has a hideous compromise: If Bo Peep (Mother Peep's daughter played by the oh-so-cute Charlotte Henry) will marry Barnaby, then he'll magnanimously tear up the mortgage as a wedding present. 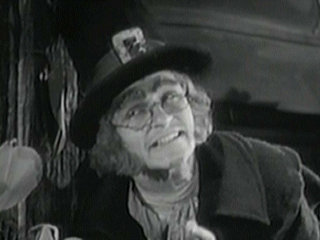 Bo Peep is terrified of a fate worse than death: marriage to Barnaby. (Hey, I'd be terrified too.) Besides she has her eye on Tom, Tom the Piper's Son (Felix Knight) the handsome tenor of the piece. Bo Peep runs to her mom for comfort and Mother Peep assures her that everything will be okay since Stannie and Ollie are going to borrow the money from their boss, the toy-maker. 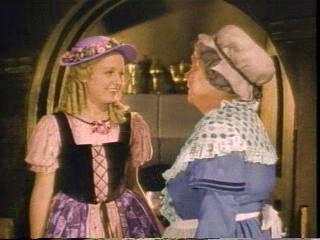 Icky colorized version, but only photo I could find of Peep and her Ma.

But, the grumpy toymaker (William Burress) is in a very bad mood indeed, he has no time to listen to Ollie's request, Santa is dropping by to see how his order of toys is coming along. Christmas is just around the corner. 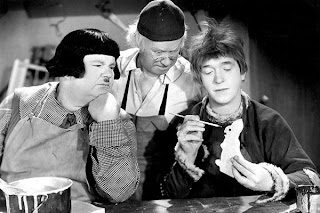 Ollie and Stanley and their snarly toymaker boss.

When Stanley reveals that he misunderstood Santa's order for 600 one foot tall wooden soldiers as 100 wooden soldiers 6 feet tall, both he and Ollie are instantly fired. Though Santa finds the whole thing hilarious.

In the meantime, Bo-Peep has lost her sheep (again) and she and her beau Tom, sing a nice duet. He announces their plans to wed and the citizens of Toyland gather round to congratulate them and join in the chorus as the little band of sheep return to the fold. 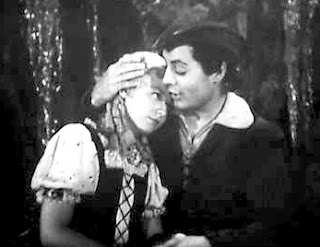 Peep and her beau, the handsome Tom, Tom the Piper's Son.

When Stanley and Ollie must break the news to Mother Peep that they've been unable to get the necessary loan and in fact, they've been fired, the worst appears about to happen. 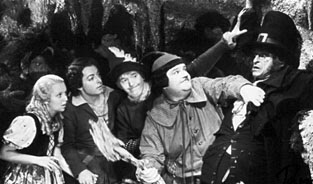 The rest of the story is all about how Stanley and Ollie try to foil the evil machinations of Barnaby played with wonderful, over-the-top facial expressions and hand gestures (left over from silent movies) by Henry Kleinbach who later went on to make dozens of movies as Henry Brandon. He is almost unrecognizable here in what I think was one of his first films. He practically steals the picture with his ham-bone interpretation of a laughably nasty dude.

(We like to mimic his hand gestures as the story goes along and, of course, we join in the singing of the songs and hum along with the soundtrack. Well, at least, I do.)

One of the side plots involves Stanley substituting for Bo-Peep as the bride in a farcical wedding scene which culminates in Ollie telling Stannie that since he's now married to Barnaby he must stay in his house. "But I don't love him...!" cries Stanley.


Eventually, Barnaby resorts to framing Tom the Piper's son for pig-napping. He has one of his henchmen kidnap...uh, pig-nap, one of the Three Little Pigs. He then leaves behind a link of sausages and some straw in Tom's house.

Tom is tried, found guilty and banished to Bogeyland across the alligator infested moat. 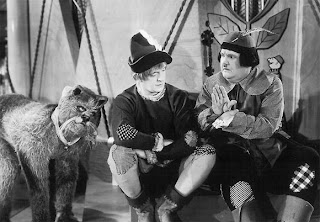 When Stanley and Ollie reveal (by taking a couple of bites of the evidence) that the sausage is beef and not pork, the King realizes that Tom is innocent and he orders Barnaby held for trial. But Barnaby is too swift for the King's men and he escapes through an underground passage (at the bottom of a well) on his property. The secret passage leads to Bogeyland.

Hot on his trail are Stanley and Ollie.

Turns out that Barnaby is the leader of the Bogeymen. Who knew?

Incensed, Barnaby leads the bogeymen in an all out attack on Toyland. Oh the horror of it! 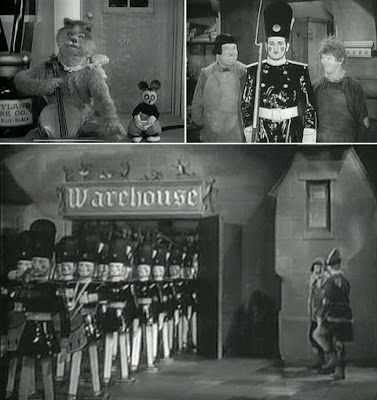 But that's when Stanley's original mistake pays off. His six foot tall soldiers save the day and in the end, evil is vanquished - Barnaby and his bogeymen are sent packing - some to be eaten by alligators in the moat surrounding Toyland - hey, nobody said it wasn't a cruel world. 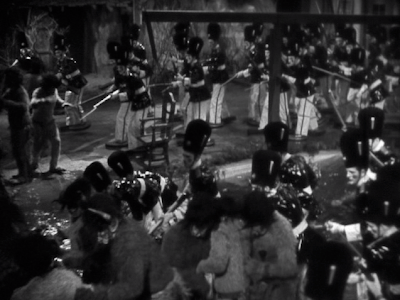 No matter how old I get, I still manage to fall under the spell of this movie each and every year. 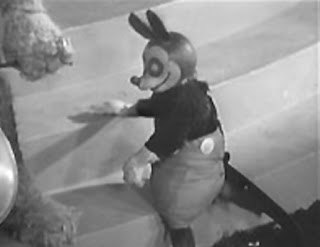 We're still not quite sure how this little mouse creature works. I think it's a monkey in disguise. 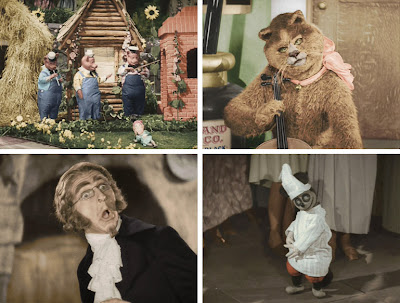 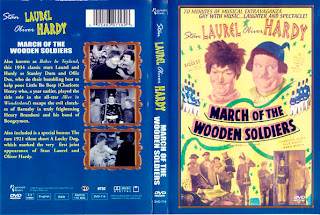 To learn about Laurel and Hardy, please use this link.

...and here's the original trailer for MARCH OF THE WOODEN SOLDIERS.

Email ThisBlogThis!Share to TwitterShare to FacebookShare to Pinterest
Labels: March of the Wooden Soldiers, Movies, Oliver and Hardy