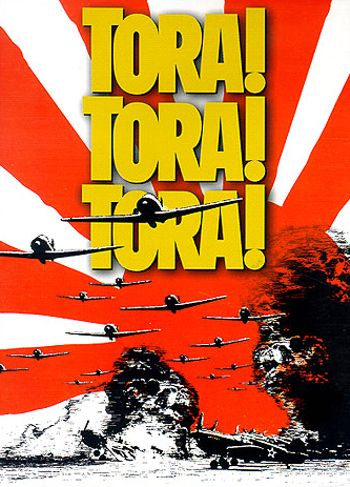 It never hurts to bring up a good movie again and again. Just in case you might have missed it the first time. Today, on the 70th Anniversary of the Japanese attack on Pearl Harbor, this 1970 film came immediately to mind. (Here's my earlier review from last year.)

What I like best about TORA! TORA! TORA! is the matter of fact way the story is revealed, bit by bit, incident by mounting incident, ineptitude on top of ineptitude (on our side, at least). Much of the film is told from the point of view of the Japanese as the surprise attack on Pearl Harbor, December is put into motion.

The United States, slow to waken to the threat, caught off-guard through a series of political and military miscalculations adds to the awful tension because of course, we know what will happen next. The 'knowing' part doesn't ease any of the suspense, by the way. In some strange way, it only adds to it.

Best of all, there are no Huge Hollywood Names to muck up the cast with their 'star power'. The sort of thing which almost always disrupts the tension and takes you out of the story for a moment or two - just enough, usually, to spoil things. There is no romance, no side story going on, just the truly dreadful events leading up to our country's involvement in WWII.

Some of the actors are: Martin Balsam, Jason Robards, Jr., Joseph Cotten, James Whitmore, E.G. Marshall and in particular, George Macready as Secretary of State Cordell Hull. On the Japanese side, the actors are not as well known to me: So Yamamura, Tatsuya Mihashi, Takahiro Tamura and Eijiro Tono, among many others.

Not exactly household names and that's just as well. This cast of reputable character actors is just what this film needed to keep from glamorizing the event. My favorite line comes at the end of the film when the Japanese admiral muses that in their actions that day, all they have done is 'awakened a sleeping giant.'

To read about the actual attack on Pearl Harbor, please use this link.
Posted by Yvette at 12:18 PM