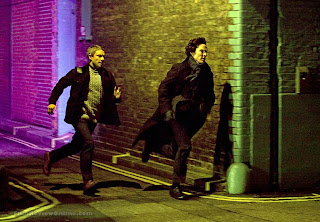 Just watched the updated Sherlock Holmes online. (Thank you, PBS.) A Study in Pink is the title of the first episode (the actual Holmes tale was A Study in Scarlet - get it?) in this intelligent new series. A series which does what I thought to be impossible: it moves Holmes into the 21st century and doesn't botch the job. Well, it has perfect casting for one excellent thing. Benedict Cumberbatch (love the name) is perfect as Holmes and Martin Freeman is nearly as perfect as a newly macho Watson, not only an Army doctor just back from Afghanistan, but a remarkably crack shot.

As Inspector Lestrade, Rupert Graves is adorable. Don't know if Lestrade is supposed to be so, but what the heck, he is. The guy playing Mycroft, less so. Mycroft as we all know, is big and hefty, the physical opposite of Holmes - since he hardly stirs from office and club. They're casting against type, I suppose.

In comparison to the frenetic, smarmy and almost unwatchable (for me) Robert Downey/Jude Law movie which was foisted on us last year, this new Holmes seems sprung from a different universe. The best thing about it: they've kept to the original personal eccentricities and details (well, most of them) of the Conan Doyle tales but added a hefty dose of modernization to keep things fresh and to the moment.

Some minor quibbles:
Can't wait to see the next episode.

Read more, in detail, about the episodes at Squeezegut Alley.
Posted by Yvette at 8:01 PM