Monday Review: ON THE LINE by S.J. Rozan 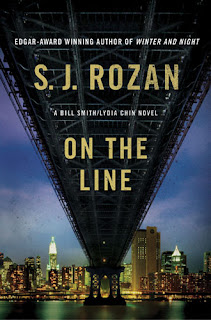 If S.J. Rozan isn't one of the finest thriller writers out there, I don't know who is. ON THE LINE, her latest Lydia Chin and Bill Smith book proves it yet again. If it ever needed proving after last year's magnificent book, THE SHANGHAI MOON, which has been nominated for just about every award there is. I really didn't know what to expect this time around, I mean how do you follow an instant classic?

Well, okay, so ON THE LINE is missing the finesse and historical imagery of THE SHANGHAI MOON, but to tell you the truth, it's just as well. This book is an out and out THRILL ride from page one. (The series is divided into alternating he and she books. One told from her point of view, the next from his.) The self-doubting, self-blaming P.I. Bill Smith isn't known for much finesse anyway. The story this time is told rapidly from his frenzied point of view - frenzied because his partner, Lydia Chin, has been kidnapped and Bill forced to play a diabolical game to try and save her life.
Bill must race around New York, dashing from clue to clue, like a pin ball. As events escalate, a young Asian woman (made up and dressed to look like Lydia Chin) is murdered and several others are kidnapped as the phone calls from a mad man (and not in the Madison avenue sense) keep coming.
In the past, the relationship between Bill Smith and Lydia Chin as been sort of nebulous. I mean, we know Bill is in love with Lydia, but she keeps holding him at arms length and has been for oh-so-many books. Though she has, lately, let down her defenses a bit. Still, we've been waiting for something serious to finally happen between them for, like, forever. At least, I have.
Well, I thought, if Bill saves her life this time out, things will have to thaw. Bill is so smitten with her, I just always want to grab Lydia and tell her: He LOVES you, dammit! Here he is risking everything, on the run from the police who think Bill is responsible for the murdered girl - certainly he's responsible for attacking two cops and a NY sanitation worker (as bad as jumping a cop) while making his get-away when trapped at the first crime scene. But Bill knows if he's taken into custody, Lydia will die. Try explaining to the cops that he's dealing with an unknown, invisible, crazed lunatic.
Luckily for Bill, along the way, he picks up a few helpers who know the ins and outs of cell phones, aps and Internet connections, a talent at which Bill is helpless. (Cell phones play a HUGE part in this story.) Teenagers Linus Wong (he owns a home-based security company) and his cohort, a goth girl named Trella (who, in description, reminds me of The Girl with the Dragon Tattoo chick, but in a much less lethal way), not to mention their dog, Woof, get involved and occasionally help save the day. While Bill begins to realize that the maniacal voice on the phone belongs to a blast from his own past, the venom is personally directed at him.
As time begins to slip away bringing Lydia closer to death, Bill and his friends are impeded by the NYC police, a sinister pimp and his goons, the maniac who keeps calling and leaving bags of incoherent-seeming clues at odd locations around the city - a guy high on drugs who hates Bill and insists that the whole vicious chase be played out as a game - and Bill's growing sense of helplessness. All he knows, all he wants is to save Lydia.
The book is written in the same kick-ass, tightly woven prose we've come to expect from S.J. Rozan, but something else has been added to the mix: an adrenalin rush of enormous proportions as we race around New York (a city the author knows well) with Lydia's life on the line and Bill in a frenzy to find her.
Posted by Yvette at 11:15 AM