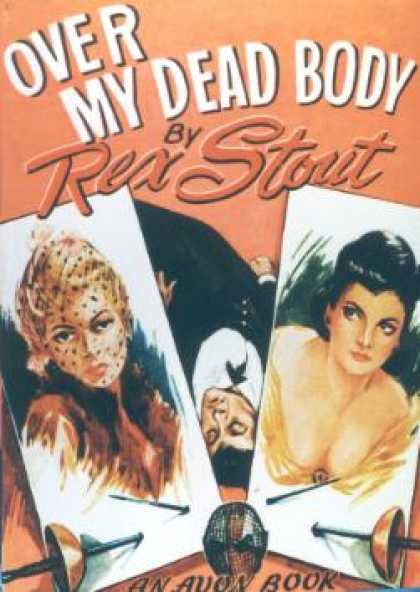 Okay, another entry in the on-going and oh-so-fun Vintage Mysteries Reading Challenge hosted by Bev over at her blog, MY READER'S BLOCK.  This has been my favorite challenge so far this year possibly because, for me, reading vintage is NO real challenge. Ha!

OVER MY DEAD BODY is Rex Stout at his very best. It has the proper mixture of mystery, detecting, fun, Inspector Cramer, Archie's weisenheimer cracks and Wolfe's genius. (Though in truth, this tale requires rather less use of genius than some of Wolfe's other more confounding puzzles.) It also adds to the mix, some hometown gals from Yugoslavia (Montenegro being Wolfe's early stomping grounds) who speak Serbo-Croat and English with aceents that Archie makes sure to have some phonetic fun with:

The bell rang and I went to the front and opened the door and there she was. I said good morning.

"Pliz," she said, "I would like to see Misturr Nero Wolfe."

Or you might have spelled it plihz or plizz or plihsz. However you spelled it, it wasn't Middle West or New England or Park Avenue or even East Side. It wasn't American and naturally it irritated me a little.

When one of the gals makes it known that she is Wolfe's long-lost daughter, well, the fur begins to fly. Archie tells Wolfe that he's made up his mind to marry the daughter and then he supposes, he'd have to call Wolfe, "Dad." Wolfe tells him, and rightly so, to shut up.

There's not much here I don't like since, for me, this is one of the best of the Wolfe books and one of the more visual ones since lots of colorful Serbo-Croat phrases are sprinkled through-out and the whole idea of a fencing studio is colorful enough in and of itself. It also has one scene in which I, yes, I admit it - I howled with laughter. The section comes late in the book once Wolfe finds out the real identity of a woman passing herself off as Madame Zorka, Yugoslavian refugee and fashion designer. The name Rex Stout comes up with for this character, not to mention, the place of birth, is just pure delight.

I have the feeling that Stout had tons of fun writing this and it surely shows.

From the beginning: When Carla Lovchen shows up at the brownstone wanting to nudge Wolfe into helping her friend, Neya Tormic - a fellow refugee and fencing master at the midtown studio of  Nikola Miltan - who has been accused of stealing diamonds from a fencing client, Wolfe's immediate reaction is to say 'no'. Until he learns that the infamous 'Donevitch gang' as he refers to a royal family faction that is in cahoots with the Nazis, trying to undermine a Yugoslavia currently involved in a tug of war with other European nations.

Archie, just for the heck of it, goes sniffing about at Miltan's studio and murder ensues: Percy Ludlow - later found to be a British spy - is found dead, killed by a fencing foil (epee) whose blunt tip had been doctored with a famous 'col de mort' gadget, part of Miltan's fencing curiosity collection.

When the deadly tip, wrapped in a bloody fencing glove is stuffed into Archie's coat pocket and no one notices its presence but Archie, he makes a fast getaway through the very fingers of the cops as they gather at the studio crime scene.

As Cramer says later when he finds out why Archie skipped from the crime scene and what he had in his pocker and who put it there: "...Mr. Goodwin doesn't turn things over to the police. Mr. Goodwin climbs a fence and runs home to papa and says see what I got, and papa says - " A funny bit because Cramer hits it right on the nose. Indelicate but correct - that is exactly what Archie does.

It is obvious that this case is more than a murder, sordid enough though it is, but when Cramer admits to Wolfe that his bosses are urging him to 'finesse' the case because of the international complications and still, another murder occurs - of a German agent this time - the Lieutenant practically camps out in Wolfe's office waiting for a stroke of genius from Wolfe to hand him the name of the guilty party.

Later, Archie's gift for quick-minded chicanery is much in evidence as he spirits Carla Lovchen from under the cops' noses - she is being hunted and has been spotted in an office building downtown - dressed as a bellhop. Archie's guts of steel of very much in evidence in OVER MY DEAD BODY and I can't remember more comings and goings, more activity in and out of the brownstone, as in this book written in 1939, but not showing a bit of age. Just another excellent entry in the long-running tales of Nero Wolfe and Archie Goodwin.

Besides a corking good story, the book also contains several excellent one liners.

Archie says: "I was trying to keep my brain cleared for action.

Archie says: I rocked on my heels for a half a minute, gazing at the chinless wonder and using my brain up to capacity.

And oh yes, there is, of course, an unexpected twist at the end which involves the true identity of  Wolfe's 'daughter'. I might add: This is also the book in which Wolfe saves his own life with a beer bottle.You would expect nothing less.

Use this link to see all the Nero Wolfe titles written by Rex Stout.
Posted by Yvette at 3:16 PM