Saturday Salon: A Favorite Painting or Two or Three...

It's Saturday, so it's Art Appreciation Day (as I like to call it) around these parts. Winslow Homer 1836 - 1910 was an extraordinary 19th Century American self-taught master whose work you are familiar with, even if you've only ever seen it on my blog header. Yes, the woman in orange relaxing with a good book is Winslow Homer's work.

Homer painted various real-life and often 'heroic' subjects, most especially down to the sea in ships. Well known for his marine themes, he also painted women and men in naturalistic, romantic landscapes and earlier, soldiers in Civil War settings. But there was/is a recognizable and often turbulent sweep to his seascapes which make his work almost instantly recognizable.

And yet he also painted the woman with a book in my blog header. One of my favorite paintings.

Read more about the life and work of Winslow Homer here. 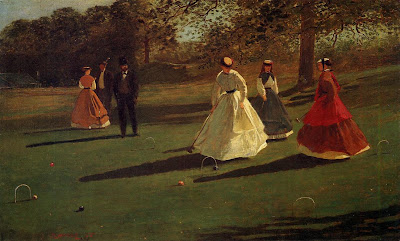 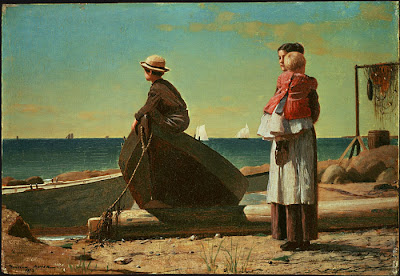 This painting is titled Dad's Coming, so I thought it particularly appropriate for this Father's Day Weekend.
Posted by Yvette at 11:20 AM