Forgotten Films Tuesday is a weekly meme hosted by Todd Mason at his blog SWEET FREEDOM. Don't forget to check over there and see who else is posting a forgotten film or two or three, waiting to be re-discovered.

If the TV is ever on in any room I happen to be in and this film comes on (as it does, occasionally, thanks to Turner Classic Movies), I drop everything and sit mesmerized. There are certain movies that always make me do this - FIVE CAME BACK (1939) starring Chester Morris, Lucille Ball, Wendy Barrie, John Carradine and Joseph Calleia is one of them.

But the funny thing is that this story was also filmed a second time under the title BACK FROM ETERNITY (1956) starring Rod Steiger, Anita Ekberg, Robert Ryan, Keith Andes, Phyllis Kirk and Gene Barry. A film directed and produced by John Farrow (Mia's father) which is just as good as the original also directed and produced by Farrow. The first screenplay was written by Jerome Cady, Dalton Trumbo and Nathaniel West. Second screenplay was by Richard Carroll who originated the story in the first place, and Jonathan Latimer. Either/or - these films are worth watching anytime of the day or night. Unfortunately, Netflix does not, currently, show either on their lists. Too bad. 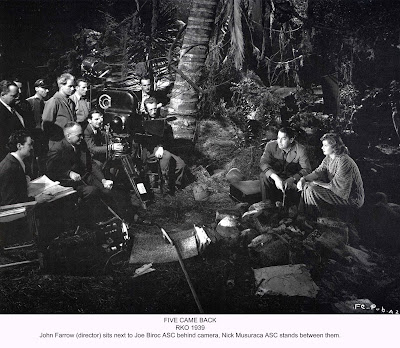 Obviously, it's the inherent story - melodramatic as it may be - that fascinates. The second movie follows the first pretty closely, story-wise. So I'll talk about both since, really, if you can't find one but find the other - it's all good.


The basic plot is this: a bunch of passengers board a plane headed for South America with a stop someplace in Central America to pick up a passenger. The plane is then blown off course by a storm or an accident on board - can't remember which - or maybe a combo of both, anyway, it crashes in the jungle.  On board the plane are: the pilot and co-pilot (obviously), an elderly couple on vacation, a kid with his guardian, a dame played in the earlier film by Lucille Ball and in the later film by Anita Ekberg, a couple engaged to be married, and most important, as it turns out, an assassin in the custody of a cop - the reason the plane made a landing in Central America to begin with. The assassin is played in the original film by Joseph Calleia who is chillingly good as Vasquez - a man with his own code of honor and ethics. In the later film, the assassin is played by Rod Steiger as Vasquel (slight name change) who is just as good in the part, but playing a man of more volatile temperament than Calleia's steely-eyed Vasquez.

Once the plane crash lands in the jungle, landing intact - very important as it turns out - though an engine is shot - the various passengers behave each according to their own established characters. Some likable, some not. A couple are heroes, all are stressed to the breaking point. Relationships are formed, friendships made or broken.You know how these stories go. I liked Chester Morris as the pilot in the 1939 version, playing off Lucille Ball's hard-lucked but tender-hearted dame. And I've always liked C. Aubrey Smith in anything. 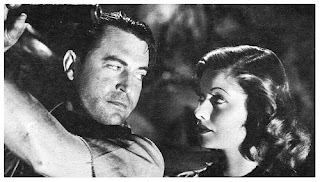 In the later film, I like Keith Andes as the impressionable co-pilot falling for Phyllis Thaxter as she realizes what a jerk her fiance - played by a slimy Gene Barry - really is. I also liked Robert Ryan as the pilot in the 1956 version, but not so much Anita Ekberg as the dame. She doesn't have the ability to project a soft heart beneath the hard-boiled veneer.

Back to the story: The plane's radio is dead but the pilot and co-pilot believe they can patch the one remaining engine and take off again. To that end, everyone is put to work clearing a path for some sort of 'runway'.

The various passengers play off each other nicely, their strengths and weaknesses soon becoming apparent. Crash landing in the jungle has a tendency to break through any lingering social class strictures.

But the thing, I think, that sets this survivor story apart from other plane crash scenarios is this: the area in which the plane has landed is known to be inhabited by tribes of headhunters. Yeah, that'll get the old adrenalin working overtime. After a few hours on the ground, the drums begin beating and the passengers slowly realize that if they don't get off the ground soon, they won't get off at all. It's a race against time to get the engine fixed and the battered plane ready to fly again.

Scene from FIVE CAME BACK.

Scene from BACK FROM ETERNITY.

Once the engine is fixed, the pilot realizes they can't all board the plane. Figuring by weight, only five passengers can be allowed to board and take off, else the plane won't get enough lift. Better to save five than save none. A decision must quickly be made as to who will board and who will stay behind, invariably to be killed by the headhunters - natives whose presence is felt but who are never seen in the film.


Unknown to the rest of the passengers, the assassin, Vasquez (Vasquel) earlier found a gun on board and has been holding on to it. In the end when none can decide who will board and fighting breaks out, Vasquez takes charge. In the doing he must shoot and kill one of the passengers who will not listen to reason.

Being a pragmatic sort and temporarily in power, he will decide who lives and who dies. He, himself, will stay behind as he has no reason to go anywhere - he knows the fate that awaits him should he go 'home'. The elderly couple decide to stay behind too because of their age. They cannot in good conscience take the place of two younger passengers.

As the plane takes off, the elderly man asks Vasquez to make sure his wife doesn't suffer. It's a heartbreaking moment especially as Vasquez only has two bullets left. In the end, he does the noble thing and kills the elderly professor and his wife and then, as the drums grow more insistent, the sound coming closer and closer, he sits and waits for the headhunters to find him.

It is a harrowing ending, but a memorable one, as far as movie-making goes. In the end, who are the heroes? Men who understand their strengths and weaknesses. Men who can think a thing through and take a stand, who can make the decision that needs making. Men of competence. A bit obvious to be sure, but I like it.

It occurs to me that many sci-fi films have used this scenario (substitute blood thirsty aliens for head hunters) quite a few times and will probably continue to do so. Why not? A good story is always worth the re-telling.

Email ThisBlogThis!Share to TwitterShare to FacebookShare to Pinterest
Labels: Back From Eternity, Five Came Back, Forgotten Film Tuesday