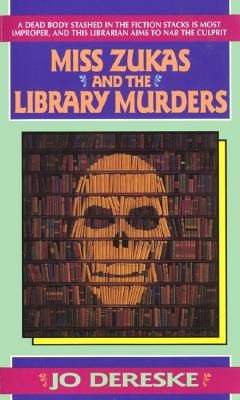 Friday's Forgotten Books is a weekly meme hosted by Patti Abbott at her blog,  PATTINASE.
Don't forget to check and see what books the other meme participants are talking about this week.
Here's the link.

I can't help it. I love the whole idea of murder in the library. Or the idea of a librarian solving crimes. Mention two words: library/murder, and I'm there. Of course it helps if the books are well written, which these are.

MISS ZUKAS AND THE LIBRARY MURDERS (1994) is the first in a pleasantly cozy series featuring Miss Wilhelmina Zukas (known as Helma), the excruciatingly proper Lithuanian American librarian (one of six on staff) for the Bellehaven, Washington library district. Did I also mention that I like books set in the Pacific Northwest? Well, I do.

Miss Zukas herself is such an endearing character. She is the heart and soul of the stories despite being one of the most unsentimental creatures you will probably ever meet. She doesn't suffer fools lightly, although her often foolish best friend Ruth, a scatter brained artist of liberal persuasions and morals, drives her to distraction. In truth, the six foot tall Ruth is not as successfully created a character as Helma Zukas, and she can be quite annoying. The reader might get the feeling that Ruth was created simply to add a bit of zip to Helma's reticence and certitude and the reader would probably be right. I put up with Ruth because she's there, but I have a great deal of affection for Helma and her stiff-necked ways and continue to read the series only because of her.

Helma, at heart, is a prime example of a woman who wears her loneliness like a shield. When the Chief of Police, Wayne Gallant and she begin to establish some sort of relationship over the course of the books, you have to read between the lines to get at what is actually going on since Gallant is coming off a bad divorce and Helma doesn't think romantic thoughts even when she's alone. She is a woman who simply refuses to allow herself to be hurt or her routine to he disturbed in any way. Though of course, that doesn't prevent it happening anyway.

"Yes. Is that significant?"

"No. It's just not a common nationality."

"Maybe not in this part of the country, but it is where I'm from. From what I understand, in Lithuania the name Zukas is the equivalent of Johnson."

"Were you always last to be called on in school?"

Helma nodded. "My cousin and I, except for part of eighth grade when Roger Zylster moved to town. Being last gave me time to think before it was my turn."

"Do you still have my home phone number?" he asked at Helma's door.

"I'll be ready to hear any facts you recall. Don't hesitate to call me."

Helma's acerbic personality and occasional witticisms seem to go hand in hand. I often wonder though while reading these books, if Helma is aware that she can be witty. There's not much soul searching being done since Helma thinks she pretty much has herself  and her day-to-day routine completely in hand, until murder comes along to disturb the course of her settled life.

The public library, the city hall, the courthouse, and the police station, all built of similar brick architecture occupied one oversize block in downtown Bellehaven...

An ambulance was backed up to the book ramp where the bookmobile usually parked. It's rear doors gaped open but at least its lights weren't gyrating, so Helma didn't think there could be a life-threatening emergency in the library. A young policeman stood on the ramp next to the staff entrance, calmly watching Helma's approach, his arms at his sides, his gun in place.

He's standing guard, she thought to herself, and a not unpleasant thrill of dread prickled along the back of her neck.

"May I see some identification?" he asked politely, touching the brim of his cap.

Miss Zukas rarely raised her voice beyond a conversational level. Instead, when necessary, she perfected a chilling calmness to her speech, like silver dimes dropping into ice water. It worked wonders on anyone who had ever been a child.

"What is the meaning of this?" Helma asked.

The policeman faltered for the briefest moment and a look of uncertainty passed across his eyes.

"I'm sorry," he replied apologetically but firmly, standing steadfast, "but do you have a right to be in this building?"

The staff door swung open and Mr. Upman, the library director, hurried forward, one hand raised like a traffic director stopping traffic. The knot of his paisley tie was twisted to the left of center.

"It's all right, officer. She's one of us. Good morning, Miss Zukas."

"I'm not certain it does look like a very good morning," Miss Zukas told Mr. Upman.

The body of a man no one seems to know is found in one of the library's aisles. Helma remembers he'd asked to see a reference book on the previous day but that's all anyone appears to know about the victim. The police and the library staff are puzzled as to why the man had, apparently, come to the library to be murdered.

When there is a second death also involving the library, Helma and Ruth decide to snoop and nearly wind up dead for their troubles.

If you, like me, are occasionally fond of this sort of ambiance - when in the mood for a quiet sort of mystery, then this series is for you.

To see all the titles in the Miss Zukas books by Jo Dereske, please use this link.
Posted by Yvette at 12:51 PM