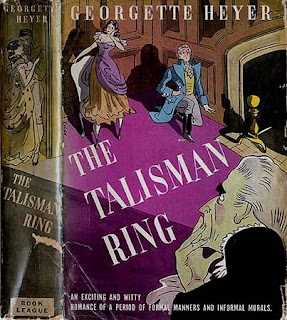 This book is part of my Library Loot of a week or so ago.

I'm not as familiar with Georgette Heyer's writings as perhaps I should be. I've only really begun reading her work within the past couple of years. First with her mysteries, a happy discovery, since I'd had no idea she'd ever written any and now I've graduated to her Regencies - primarily because of urgings and recommendations from the Blog-O-Sphere.

An aside: The Regency era in English history was a brief one but not so to judge by all the novels and stories set near or within those few years of 1811 - 1820. An intriguing and fun to read non-fiction book about the Regency is AN ELEGANT MADNESS High Society in Regency England by Venetia Murray, if, by the way, you want to know more about this particularly interesting, though rather short, period in time.

Since I'd just recently finished reading THE WOMAN IN WHITE by Wilkie Collins - a book set in a totally different era of British history (the Victorian years) - but blessed with the same speech rhythm and tone - something which falls very nicely on my American ear - I suppose I was predisposed to enjoy reading Georgette Heyer's two stories filled with witty banter and the often preposterous hi-jinks of the English gentry.


First THE TALISMAN RING,  then a few words on THE CORINTHIAN:

The thing that struck me first and foremost about THE TALISMAN RING is that at some time it must really, should really, be turned into a play - a costume farce in the style of Oscar Wilde or Sheridan or Oliver Goldsmith. It is perfectly created for that purpose, whether by intent or just happy circumstance. The whole thing speaks VISUALS as you read, the scenario practically forming itself front of you as you read. (I would love to get an audio version of this at some point.)

I mean, the thing practically stages itself. Most of the action takes place in either an inn - and oh, what an inn! - or at a nearby manor house with one of the scenes there being an everyone bumping into each other in the dark burglary attempt complete with secret passageway, suddenly snuffed out candles, shots in the dark and mysterious exits and entrances.

The Red Lion Inn which is the main set of the piece is an Inn conceived in brilliance,  perfect for a stage set. It is a large place, second and third floors, filled with passageways and stairs in and on which to lurk. It has a public space and a private - for those staying overnight. But best of all, it has secret cellars where the smuggled (or 'free-trade') whiskey is stored far from the prying eyes of the law. One of these cellars is used throughout most of the book to hide one of the two main characters from the grasp of the Bow Street Runners who keep turning up ready to arrest him for a murder he didn't commit. But I'm getting ahead of myself.

When Eustacie, the highly imaginative and half-French granddaughter of Lord Lavenham runs away in the night (on horseback through a dark forest) rather than marry Sir Tristram Shield (to whom she has been betrothed by the dying Lavenham) because Sir Tristram is 'not sympathique,' events are set in motion. Eustacie is soon caught up in a smuggling operation gone awry, in fact she runs right into the arms of her black sheep of a cousin, Ludovic Lavenham (don't you love these names?) a young, handsome and mostly reckless miscreant who is on the run from the law and a possible charge of murder most foul.

Events then dictate that Eustacie and Ludovic take refuge in The Red Lion Inn for most of the book. There, they meet up with the very sensible Miss Sara Thane (a wonderful character) a 28 year old spinster travelling with her eccentric brother, Sir Hugh, both staying on in the inn because he is nursing a head cold.

Here is a flavor of the sort of conversation that goes on between Sara and Eustacie once the girl in flight explains her plight:

"...In fact, we are betrothed. That is why I have run away. He has no conversation. Morevover, he said that if I went to London, I should not find myself in any way remarkable."

"He was wrong," said Miss Thane with conviction.

"Yes, I think he was wrong, but you see he is not sympathique, and he does not like women."

"But he does not want to marry me! It is just that he must have an heir, and because Grandpere made for us a mariage de convenance. Only Grandpere is dead now, and I am not going to marry a person who says that he would not care if I went to the guillotine in a tumbril!"

"Did he really say that?" inquired Miss Thane. "He must be a positive Monster!"

"Well, no, he did not say exactly that," admitted Eustacie. "But when I asked him if he would not be sorry to see me, a jeune fille, in a tumbril, and dressed all in white, he said he would be sorry for anyone in a trumbril, 'whatever their age or sex or - or apparel!"

"You need say no more; I can see that he is a person of no sensibility," said Miss Thane. "I am not surprised that you ran away from him to join your cousin Ludovic."

"Oh, I didn't!" replied Eustacie. "I mean, I never knew I was going to meet Ludovic. I ran away to become a governess."

"Forgive me," said Miss Thane, "but have you then just met your cousin Ludovic by chance, for the first time?"

"But yes, I have told you! And he said I should not do for a governess." She sighed. "I wish I could think of something to be that was exciting! If only I were a man!"

"Yes," agreed Miss Thane. "I feel very strongly that you should have been a man and gone smuggling with your cousin."

Very soon, Sir Tristam Shield shows up looking for his estranged fiancee - just in the nick of time, actually. But Shield isn't the only one who shows up to be drawn into several hairbrained schemes as the story progresses.

The Red Lion Inn is constantly plagued by comings and goings, luckily it is a setting made perfect by multi-doors and windows opening and closing, hallways, upstairs and down. As someone departs, someone else enters - just the sort of split second timing beloved of farces since time immemorial. In fact, there is so much activity going on in the Inn that the building sort of takes on a life of its own.

Here's the gist of it: Ludovic Lavenham is thought to have murdered a man named Plunkett a few years before the story begins. No definite proof being found for it except that a shot was heard and the body found just moments after Ludovic arrived on the scene. But the most important thing is that the ring that Plunkett had in his possession - the talisman ring of the title, an old Lavenham family heirloom - has disappeared and presumed stolen by Ludovic at the time of the murder. To know more about the 'why' of the murder you'll have to read the book. Suffice to say, Ludovic has been on the run, cut off from his family and inheritance (he is next in line to Lord Lavenham's title). But instead of fleeing the country, obviously, Ludovic has been hanging around  the vicinity and fallen in with a nefarious gang of 'free-traders' - smugglers to you and me.

The real bad guy is eventually reasoned to be the deceptively charming Beau Lavenham (not telling you anything you won't either figure out or find out early in the book) a man given to wearing chartreuse, puce and stripes (!), a man who, if Ludovic were out of the picture permanently, would be next in line to inherit.

The rest of story is taken up with the dour Sir Tristram, the irrepressible Eustacie with her often impenetrable, (unless you speak French) but very flavorful utterances, the indefatigable Miss Sara Thane, her befuddled brother, the stalwart innkeeper Bob Nye and last, but not least, the scapegrace Ludovic who must be kept hidden at all costs - all trying to figure out a way to outwit the Beau (as he's called) and find the lost talisman ring (which will prove Ludovic doesn't have it and is therefore innocent). The ring is thought to be in hiding somewhere in Beau's abode - currently the dower house of the late Lord Lavenham's manor - and this is where the secret passageway plot comes in. Author Georgette Heyer leaves nothing out - of course there must be a secret passageway!

It's all too engaging and fun and delightful to read as events unfold at breakneck speed as they must in a story of this kind. As I said earlier, this is perfectly set up to become a play (or even an operetta) if only someone would adapt it.

The other book of Heyers which I read recently, practically in tandem with THE TALISMAN RING, is THE CORINTHIAN, also a story of a runaway (two, actually) from that beloved trope of novelists, an Arranged Marriage. When Sir Richard Wyndham, a rich Corinthian being pressured by his family to marry and produce an heir, first meets the fabulously rich heiress, Miss Penelope Creed (known to her friends as Pen) she is dressed as a boy and making her escape out a bedroom window dangling from a sheet.

The rest of this charming book flies by as both Wyndham and Pen are forced, by circumstance, to ride a public stagecoach (!) and suffer occasional unpleasantness in their plan to reach Pen's childhood sweetheart who had, originally, promised to marry her when they grew up. Wyndham is caught up in the scheme primarily because he is postponing the moment when he must return to 'reality' -  London - and make a most unsuitable marriage himself.

As I said, another delight of a book.

I will be reading more Georgette Heyer, sooner rather than later. When I think what I have been missing, I mean, it is just not to be borne.
Posted by Yvette at 12:59 PM