Five Best Books...on any given subject, is a meme I am very fond of. Hosted weekly by Cassandra at INDIE READER HOUSTON, this week the subject is: Five Best Books About Travel. From what I understand, in Cassie's view, 'travel' has a broad definition as you will see when you check out her picks for the week.
My own particular favorite books about travel are all a little more down to earth except perhaps one or maybe two.

1) Not so much about the actual fact of travelling but certainly about the art of travelling and finding yourself establishing a new kind of life for half a year, every year. UNDER THE TUSCAN SUN by Frances Mayes is the first book I can remember reading about someone moving to another country - in this case, the Tuscan countryside of Italy. Though now there seem to be tons of books of this sort, for me, UNDER THE TUSCAN SUN was the first and still, the best. I am very fond of Mayes quiet and poetic sense, her lyrical observations about what has to be one of the most gorgeous places on earth and also, of course, her thoughts on the people she meets there.
Not so crazy about the movie which, outside the photography, (And how difficult, really, is it to photograph Tuscany so that it appears beautiful?) has little to recommend it.  The film-makers took Frances Mayes original and very affecting story and changed it around to make it - what? More appealing to a younger audience? I say: read the book. Try if you can to find a copy without the movie tie-in.  I would also recommend BELLA TUSCANY by Frances Mayes, as a wonderful follow-up. 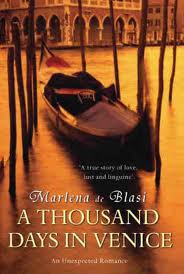 2) A THOUSAND DAYS IN VENICE An Unexpected Romance by Marlena de Blasi.
At a point in her life and at an age, in which she was fully and fairly expected by children and family to be 'settled' into a more 'routine' sort of life, Marlena, a divorced chef from St. Louis, suddenly finds herself the unexpected and intense object of 'love at first sight.' In this case, 'sight' being a glimpse across the crowded Piazza San Marco. Fernando, having once seen Marlena, is thoroughly smitten and having once devised to meet her, falls even more under her spell. A pragmatic Italian with yet an intense streak of romance flowing through his veins, Fernando soon convinces Marlena (who also has a wild streak of romanticism flowing through her veins) to sell her home in America and come to Italy to live with him. They are married and the rest, as they say, is history.
This is the first of several books in which Marlena de Blasi extols the pleasures of the Italian countryside, the beautiful heart and soul of the Italian people and last, but certainly not least, the glories of Italian food.

3) THE GREAT RAILWAY BAZAAR By Train Through Asia by Paul Theroux
The travel book to define all travel books, I think. I read this classic by famed novelist and non-fiction author Paul Theroux, many years ago and truth to tell, I should probably line it up to read again - my memory being what it is. But what's not to like about a book that is really a four month long romantic,
colorful, quirky, eye-opening, eccentric and entertaining train ride through an exotic array of countries.
According to Wikipedia:
The book '...recounts Theroux's journey...through Europe, the Middle East, the Indian Sub-Continent and Southeast Asia before finally returning via the Trans-Siberian Railway."  I mean, really. How else, where else, could you have such an exuberant travel adventure without actually leaving your home?
There is a sequel of sorts done up recently by Theroux in which he goes back over the same trail and discovers what has changed over the course of the trip to the 'same' countries. It is called, GHOST TRAIN TO THE EASTERN STAR and it is on my TBR list as we speak. 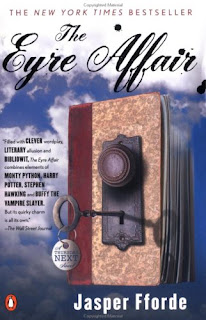 4) Wikipedia says that Jasper Fforde's style of writing is called Postmodern Literature - if that means that Fforde has invented a brave new world based on altered images and alternate histories of both 'real' and non-real events then I say: okay, sure - postmodern it is.
To travel to Greater Swindon, the 'place' in England from which most events having to do with Thursday Next, Literary Detective, spring forward, is to undergo a transformation of everything you know and hold near and dear. Ha! You can begin with THE EYRE AFFAIR or really,  LOST IN A GOOD BOOK or even THE WELL OF LOST PLOTS. Doesn't matter, you will be mostly lost if you try to make any rational sense of it all. So there's really no point in trying. Knowing that going in, you can easily jump back and forth without much fuss.
The journey is the thing. The journey alongside Thursday Next (the heroine) into and out of books in a universe which is the same as ours, but not - where you get to mingle with fictional characters from classic literature, occasionally do a bit of time-travel and duke it out with the most fearsome and ferocious killer imaginable, the Minotaur from ancient legend, who shows up now and then to wreak havoc. But be forewarned, if you do not like British wit, literary puns, similes and metaphors run amok - you will not be welcome.
Travel to Swindon and its environs at your own risk.

5) ALICE IN WONDERLAND by Lewis Carroll.
Yeah, it's a travel book. Really. Think about it. You fall down a rabbit hole and you find yourself a stranger in a strange land forced to walk near and far, from pillar to post, trying to find your way back home. What are you doing in Wonderland but travelling? Oh, and having adventures of course. But that's the best part of travelling.
Enough said.
*********************************﻿
There are a few other 'travel' books I've been meaning to read (or read so long ago I might just as well not have read them at all) over the years and though one has finally made it into my home (the book by Beryl Markham) it remains unread due to the fact that try as I might I can't really read everything at the same time. If you can figure out how to do this, please, will you let me know? Thanks.
WEST WITH THE NIGHT by Beryl Markham
A book about adventures in Africa, travelling by plane piloted by Markham herself, in the early part of the 20th century when planes were still a novelty and only the very intrepid dared take to the air in the rickety things. Markham was one of the most intrepid.
A SHORT WALK IN THE HINDU KUSH by Eric Newby
I've been trying on and off, to find a copy of this book for awhile now. I leave it up to luck. I know I'll come across it at some point. Recommended very highly by Nancy Pearl. She recommends all of Newby's work. And as you all know, Nancy Pearl is my reading guru.
THE TOWERS OF TREBIZOND by Rose Macaulay.
Another book - a novel - I've been meaning to hunt down. This one features the famous opening sentence: " Take my camel, dear," said my aunt Dot, as she climbed down from this animal on her return from High Mass." Really, there's very little more to be added. I want to read this book.
Two books which I read long ago (in high school) and remember very little about except that at one time - influenced by same - I had the notion to travel to Africa on a picture safari - never did manage it though. But everyone should read these books who is at all interested in the world outside their front doors: THE WHITE NILE and THE BLUE NILE, both by journalist Alan Moorehead, both about the search for and discovery of the source of the Nile river - back when great parts of the world were still hidden from western eyes and exploration was the grandest of dangerous adventures.
Oh, and if you want to have fun playing archaeologist in Egypt at the turn of the 20th century, I really, REALLY recommend the Amelia Peabody books by Egyptologist and author, Elizabeth Peters. Adventures told in the high romantic style of H. Rider Haggard. Begin with CROCODILE ON THE SANDBANK and take it from there.
Also, don't forget to take a look at Nancy Pearl's latest in the Book Lust series, coincidentally having much to do with today's subject: 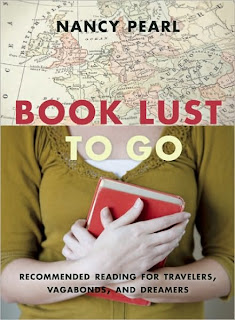