A Favorite Film: THE MAN WHO NEVER WAS (1956) starring Clifton Webb 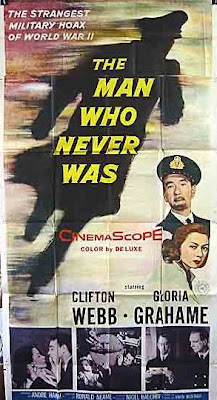 Before we go too much further let me just mention that I love THE MAN WHO NEVER WAS, a film directed by Ronald Neame, and will brook no opposition. Ha! What can I say? This is one of those films that captured my imagination years ago when I first saw it as a kid and it still works its magic on me to this day. But then, I was always a history buff - and the 'ins and outs' of WWII espionage have always intrigued me.

Then there's Clifton Webb. I absolutely adore him in this role - based on a real man and a real event  - as the stern, stalwart, dedicated, brilliant tactician Lt. Commander Ewen Montagu. (The film is based on Montagu's book.) This is, I think, my favorite Clifton Webb performance next to THREE COINS IN THE FOUNTAIN, so there's that to add to the pleasure of watching this film, for me at least.

The idea is this: Before the Allied invasion of Sicily in 1943, the British devised a plan known as Operation Mincemeat meant to fool the Axis powers into thinking that the invasion was really going to take place either in Greece or Sardinia.

The film takes liberties with the original story, but the essentials are pretty much there. Webb stars with Gloria Graham in one of her best roles. She is wonderful as the flat-mate of the woman who works in Montagu's office. It is her own personal heartbreak that later helps convince an Irish spy working for the Nazis - played by a really creepy Stephen Boyd in, I believe, his first movie role - that the information he has been sent to double check, is true.

Except that it isn't.

Montagu had concocted a fantastic plot meant to fool the enemy into moving much of their men and materials to the coast of Greece, a plan that should never have worked but somehow did. He devised the idea of planting false papers on a freshly dead body which would then be coaxed to wash up on the coast of neutral Spain - a haven (along with Portugal) for spies and other assorted nefarious types during WWII.  It was assumed by the Brits that once the body washed ashore, it would of course be searched and any important papers would be copied and passed on to the Germans. The assumption was correct.

How Montagu first devises his plan and convinces the higher-ups to go along with it is fascinating to watch. But then comes the hard part - finding just the right dead body. (You wouldn't think it would be that hard to find a dead body during a war, but you'd be wrong.) Once they do find a cadaver that will suit, Montagu and his associates must invent a believable life for the dead man who must be thought to be an important British courier carrying secret papers pertaining to the erstwhile invasion of Greece. His body would have washed ashore after - supposedly - being drowned when his ship went down in coastal waters.

The dead man is given an identity: Major William Martin, R.M. Montagu and his associates then work to bring that identity 'to life'.  Besides the 'correct' sort of clothing, they give Martin all the various accoutrement that a man in his position would be thought to carry: passport,  club memberships, money, theater ticket stubs, love letters -  nothing is overlooked. The important orders will be carried in an attache case strapped to Martin's wrist.

Once every detail is taken care of, Martin is transported in the strictest secrecy aboard a submarine to a spot off the coast of Spain where the tides have a good chance of bringing the body to shore.

Later, while Montagu and his associates bite their fingernails waiting to see if Operation Mincemeat has worked, German high command sends an Irish sympathizer/spy, Patrick O'Reilly (Stephen Boyd) to London to check out the story of Wm. Martin, R.M. Once this interest is noted, Montagu realizes that the plan has worked - at least, enough so that someone is snooping around, making inquiries about a man named Martin.

Patrick O'Reilly sets up a a kind of sting to see if Martin is 'real' or not - a 'sting' that unwittingly involves Gloria Graham as the recently bereaved girlfriend of a downed RAF pilot (she knows nothing of the Martin plan but has just received news of her boyfriend's death), then O'Reilly goes back to his London boarding house and waits to make his report by radio. The proof of Martin's existence lies in whether he [O'Reilly] is arrested that night or not.

The film's near-documentary style works very well for this sort of story. There is suspense, but not so over-the-top that it's overwrought and unbelievable. I mean, the whole plot was so patently absurd that it really needed no histrionics - this event actually happened. Well, most of it anyway. The screenplay does take liberties, but that's to be expected. It's the very low-key story-telling that makes the thing seem that much more matter-of-fact believable. The men behind this plot had to be low-key since their intentions were so grandiose.

No two ways about it, this is a simply terrific film. If you have any interest whatsoever in the machinations behind the scenes, the human element at work during a world war of enormous and horrific proportions, don't miss THE MAN WHO NEVER WAS.

And if your interest is piqued and you want to read more about this real-life plot, then I suggest reading Ben MacIntyre's book, OPERATION MINCEMEAT. A non-fiction story that reads like fiction made all the more preposterous because it really and truly happened. 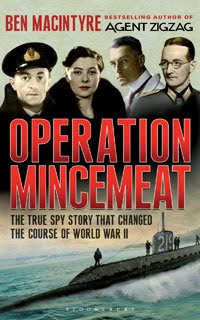 Email ThisBlogThis!Share to TwitterShare to FacebookShare to Pinterest
Labels: Movies, THe Man Who Never Was