I don't often get out to the movies much anymore, so I usually wait until they show up on Netflix. Last night I watched THE KING'S SPEECH for the first time - the dvd actually arrived a few weeks ago but I'd lost track of it. It happens sometimes.

Anyway, I'm probably one of the few remaining people in the known world who hadn't seen this, but now I'm happy to say that - yes - I've seen it and loved it to pieces. (No big surprise there - you know what an Anglophile I am.) The Brits do this sort of historical movie so very very well. They are masters of the form. Colin Firth was deserving of his Oscar, it would have been an outrage if he HADN'T won. I'm just glad he did. I'm saying it belatedly, but I'm saying it. He was superb at George VI, the reluctant king. 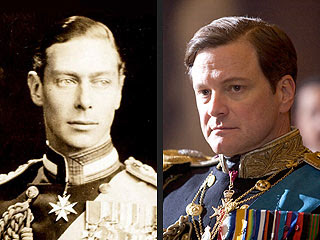 In my view, Geoffrey Rush was just as wonderful as the King's eccentric speech therapist, Lionel Logue. But then, for me, Geoffrey Rush can do no wrong. He is superb in anything he undertakes.

And while I'm at it, I'm going to mention Helena Bonham Carter who in her own quiet, steely way is every bit as good as Firth and Rush. I was watching and thinking, this woman will live to be a 100. I kept looking at the little Elizabeth and thinking she is Queen now going into her 90's soon. I mean, the film fairly drips with history on-going.

It's funny how fate works. George VI was the right king at the right time - for a war-torn England. His brother, the ineffectual and let's face it - not very bright - David, Prince of Wales (Edward VIII) would have been a disaster - might even have hurt the war effort. Thank goodness he was forced to abdicate when he did. Ironically, we have a lot to thank Wallis Simpson for - in my view.

THE KING'S SPEECH is a truly memorable movie - a classic. If by some throw of the dice you haven't seen it, all I can say is: don't wait another second.
Posted by Yvette at 7:57 PM