Ode to A Pencil Thin Mustache

Okay, I admit it, those idiosyncratic pencil mustaches are an acquired taste. No actor worth his salt would dare have one today. (At least none that I can name off the top of my head.) He'd be laughed off the red carpet. When you do spot a little furry line under an aquiline nose, above sultry etched lips, you think: must be for a movie role. Yup. These little attention getters have definitely gone out of fashion. Let's face it, a pencil thin mustache goes with slicked back hair, a sleek pin-striped suit and a nice pair of correspondent shoes but maybe not so much with t-shirt, baggy shorts and flip flops.

Although Johnny Depp could probably carry that look off. (I think he could probably carry anything off. Reason why I'm thinking he will make something special of THE THIN MAN once they find the right person to play Nora. The trick to playing period, I'm convinced, is to appear as if you are NOT playing period. To look as if this is naturally how you dress.  No matter what is called for, you must appear as if this your  every day way of dressing. I'm convinced if you master that, you can wear anything on screen. Reason why it all works for Depp.)

I pine. I pine for the tonsorial splendor ot the 1930's and 40's. Back then, a pencil thin mustache could belong to the most dastardly of sleazy villains or the most dapper of dashing heroes. The pencil thin showed no favorites though it did, in certain cases, show a marked preference for the sneer. And of course, dark hair was essential. I mean, a blond pencil thin mustache had no drama, no oomph, no exclamation, no 'look at me' intent.

Back then, who had the best examples of pencil thin panache? Feast your eyes on the following:

Gilbert Roland. The most elegant of Latin screen legends. Not quite a major star. But not quite a nobody either. He was, to my way of thinking, the man who never aged. In fact, as the years passed, he only got better and better looking.Obviously he'd found the fountain of youth and took a sip or two.(Or he kept a portrait up in the attic which did his aging for him.) And far as I know, he always kept his mustache. 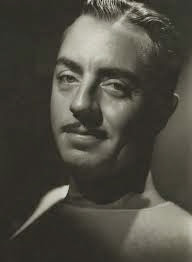 William Powell. Remembered for his insouciant portrayal of Nick Charles in THE THIN MAN movies. He was born to play the dashing, dapper, martini guzzling, wise-cracking detective opposite Myrna Loy as his lucky, indulgent wife, Nora. If he ever shaved his lip, I don't remember it. 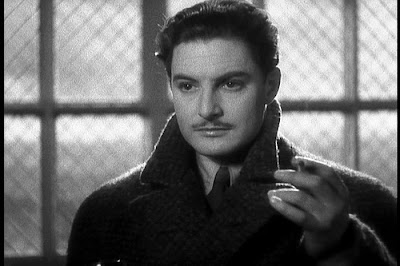 Robert Donat. One of the few actors who looked just as good without a mustache as with. Though he did appear a bit more dapper with. Remembered most, I suppose, for his role as an innocent man on the run from a bunch of dangerous spies AND the cops in Hitchcock's early classic, THE 39 STEPS, a film in which Donat was the epitome of cool under pressure.

Clark Gable. The King. A super star who basically kept his sexy take-charge persona from beginning to end. While he did, occasionally, appear mustache-less, I don't believe it ever worked very well for him. Without that furry lip, Gable appeared oddly vulnerable and ill at ease.I think that mustache gave him strength, i.e. the Samson complex.

Basil Rathbone. Another actor who could appear with or without. Though he tended to play the villain when he was with 'stache. As Sherlock Holmes he was without and it did nothing to rob him of his strength. He had a finely boned face and an intelligent brow, that always helped when he appeared without.

Vincent Price. Now here was an actor who, without his mustache, appeared on screen as weak, lily-livered and in general need of being smacked about. It was the most remarkable transformation. Add the mustache and he was suddenly in command of a situation or at least able to give the impression that he was. My favorite Vincent Price role? The sleazy, oily, Shelby Carpenter in LAURA - sans mustache.

Errol Flynn. Another superstar,  but one whose looks didn't hold up as well as Gable's. While he was 'in'  looks he was magnificent on screen, mostly with mustache. Though in THE SEA HAWK (his first starring role) and CAPTAIN BLOOD, two early swashbuckling films in which he dazzled - he appeared without the 'stache. Later, the mustache became part of his dashing, on-screen persona.

Warren Williams. Never a huge star, he often played business types, detectives, lawyers (Perry Mason) and other assorted stalwart men with chiseled profiles. I am a big fan of Williams, mostly because of his role in GOLD DIGGERS OF 1933 where he played opposite Joan Blondell and his role as Julius Caesar in CLEOPATRA opposite Claudette Colbert.

Ronald Colman. A Golden Age star with, at one time, the most recognizable speaking voice in films. Colman had that inchoate, elegant air of the movie-star down pat - but to me, he always looked better with the 'stache than without. THE PRISONER OF ZENDA is my favorite of his many films. Though LOST HORIZON comes in a close second.

Tom Conway. Brother to the more famous actor, George Sanders. I will always remember Conway as the lead in The Falcon B-movie mysteries in which he 'literally' took over for Sanders who originated the role. And of course, who can forget  Conway as the oh-so-elegantly sleazy psychiatrist in CAT PEOPLE? Not me.

And finally, have you ever met anyone who didn't like David Niven and his snappy little mustache? Hardly remember ever seeing him without - it served him very well in a long and varied career. A man and actor who made being a bon-vivant on screen, a good thing. LOVED him as Colonel Race in Agatha Christie's DEATH ON THE NILE and as the bemused, self-important drama critic in PLEASE DON'T EAT THE DAISIES with Doris Day, and as the world traveller (by balloon) with Shirley MacLaine in AROUND THE WORLD IN 80 DAYS. And even when he went strictly dramatic, i.e. in GUNS OF NAVARONE or playing opposite Kim Hunter in Michael Powell's wartime fantasy, STAIRWAY TO HEAVEN, he was entirely believable. (Without 'stache' if I'm remembering correctly which is always a chancy proposition at best.) You would never think an actor with such a specific look could be so utterly fabulous is so many varied roles. But you'd be wrong.
Posted by Yvette at 9:32 PM