I reviewed the first half of Wilkie Collins' classic THE WOMAN IN WHITE some days ago - at this link. So now I've returned with the second half of my review of a book I never expected to love as much as I do. My experience with Wilkie Collins is/was limited. I'd only read THE MOONSTONE eons ago and didn't remember much about it. (I'm going to be re-reading that in a few weeks simply because I would be a fool not to.) But I joined in The Victorian Reading Challenge (on a whim) a couple of months ago and hadn't done much since - been too busy reading other stuff. Wilkie Collins is my first Victorian author (in years) and he definitely won't be the last.

The Victorian Reading Challenge is hosted by Bethany at SUBTLE MELODRAMA.

Before I go any further, I thought I'd add a sentence which, to me, exemplifies much of what I like about Victorian Literature:

June18th - The misery of self-reproach which I suffered yesterday evening, on hearing what Laura told me in the boat-house, returned in the loneliness of the night, and kept me waking and wretched for hours.

Isn't this excessively marvelous? It's from the pages written by Vincent Gilmore of Chancery Lane, Solicitor - to further the plot of THE WOMAN IN WHITE. Although from its tone you might think it was was an excerpt from a woman's journal. Evidently men and women were prone to overwrought thoughts and actions during Victoria's reign.

One of the reasons why I like it is that, despite the flourishes it is exactly what it purports to be. There's no getting around the meaning of these words. The man was obviously overwrought and this is evident. I love the use of fairly specific language to describe EXACTLY what a character means - the English language is a beautiful thing if used well and I love it used in this dramatic fashion.

When last we left the story, poor but honest and honorable drawing master Mr. Walter Hartright (our hero) was gone from the scene. He'd left for Central America to get away from the very idea that the love of his life, Laura Fairlie - a rich and beautiful, but not especially brilliant, young woman - had been forced, by societal and other obligations to marry Sir Percival Glyde, an unprincipled cad and desperate fortune-hunter. Just how desperate we were yet to find out. Indeed, at this point in the reading, we were left to wonder if Walter would ever return to the increasingly gloomy narrative.

The story continues to be told from different points of view, journals, letters and 'testimony' of witnesses as the story evolves.

Laura - Lady Glyde - has moved into Sir Percival's large but run-down estate (Sir Percival not having had the necessary wherewithal to maintain the property) after a month-long honeymoon in Italy. She is joined at Glyde's house by her half-sister and confidant, Marian Halcomb - a young woman denied a husband in Victorian Society because of her ugliness and possibly, her forthright manner. But what Marian lacks in outer beauty she makes up for in inner strength, imagination and daring. I can't help but wish that  Walter had fallen in love with her instead. (I'm sure I'm not the only reader who has ever thought that. I often wonder if it occurred to Wilkie Collins at all.)

Making up the rest of the cast is another couple whom Sir Percival appears to have picked up in Italy - the rotund and smarmy Count Fosco, of supposed Italian nobility - and his oddly complaisant wife, the Countess who happens to be a cousin of the Fairlies and as such, in line for a 10,000 pound inheritance should anything happen to Laura. Uh-oh.

It doesn't take a genius to figure out that something is not quite right in this strange household. Sure enough, Glyde begins almost immediately to show his true colors by attempting to force Laura to sign some official looking papers which he won't allow her to read. (!!??) But even Laura has her limits and she refuses to sign without reading the content. Good for her. I don't think I could have kept on reading if she'd meekly signed without protest. Though there is some 'hemming and hawing' but thank goodness, Marian is there to provide ballast.

I did wonder though, why Percival didn't simply forge Laura's signature. But perhaps there are some things even an unprincipled cad will not do. In truth, forgery would have been the least of his villainy especially since we learn later that he had, indeed, forged a line or two in a wedding registry. But I can say no more for fear of giving away a main plot point.

Soon enough it becomes evident that Glyde will stick at nothing (except forgery), not even physical intimidation, to get his hands on Laura's money AND that the oily Count Fosco is meant to act as the 'good cop' in their 'bad cop/good cop' routine. What I find most interesting about these pages is that with Walter off in the wilds of Central America and Laura's lawyer unable to do much because of the austere marriage settlement (Victorian pre-nup), Laura and Marian are pretty much on their own. In Victorian society there wasn't much a woman could do once she married and became basically her husband's chattel, most especially if she had no father or older brother to step in on her account. So Laura must resort to lots of hand-wringing and 'what shall we do? what shall we do? That sort of thing.

It is touching (and frustrating) to think how helpless she and Marian truly are under the strictures of the law of the land AND in society's narrow view.

I know that Wilkie Collins didn't hold much with marriage, his own unconventional living arrangements are proof enough of that. Obviously he didn't think much of what marriage did to women. This view comes across clearly in THE WOMAN IN WHITE. Laura Fairlie was pretty much doomed from the start if not for the machinations of Marian and later, Walter Hartright who comes back into the plot in the veritable nick of time.

As does Anne Cartherick - remember her? She is 'the woman in white' of the title and she is still lurking in the shadows, on the run from the men in white who want nothing more than to find her and take her back to the lunatic asylum.

We soon find out that Anne Catherick might be in possession of a deep, dark secret which could destroy Sir Percival Glyde. When Anne tries again to see Laura and warn her (remember she sent Laura the anonymous letter warning her - to no avail - not to marry Percival Glyde), she is sealing her own doom once the nefarious Count Fosco with his cockatoo, canaries and white mice (??!!) picks up the scent. His modus vivendi is making sure that nothing happens to Glyde who has promised him [Fosco] a cut of Laura's money. Greed and self-importance guides Fosco who is one of the sleaziest, slimiest villains in literary history. Yet the man can't be all bad, he does fall head over heels for Marian Halcomb. He calls her 'magnificent' and you know, in truth, she is.

But oh, is Fosco odious. He is the kind of cunning, operatic villain you hiss at. A man who thinks he knows himself but is hardly aware of his own villainy. He has an excuse and a reason for everything he does and expects you (as we learn later in his self-explaining, self-excusing treatise) to overlook his methods because his motives surely can't be seen as anything but noble.

Okay, long story short: Earlier, it had been made clear to us that Anne Catherick and Laura Fairlie have a very strong physical resemblance to each other. (When all is revealed in the end, you will learn why this should be so.) With that in mind, a hideous plot is hatched - based on this resemblance - by Fosco and Glyde and is carried out with a willful proficiency and malice. Your heart will be in your mouth as you read of the length and breadth that Fosco and Glyde will go to get their hands on Laura's money. Poor Anne Catherick. Poor Laura.

I can say no more without giving away too much more of the plot. But I will say this: Walter Hartright comes back on the scene just in the nick of time. Literally.

From then on it's sheer hard sleuthing grunt work on Walter's part that will help save the day and it is a happy day indeed when we read that Glyde and later, Fosco, both come to a very bad end. Two more unprincipled villains more deseerving of their bad endings you will never meet.

Also near the end, in full circle mode, we welcome back the delightfully exuberant - tiny in stature but enormous in heart - Professor Pesca who had, in the first few pages of the book, been responsible for Walter's getting the job as drawing master to Laura and Marian. Though this time around it is a Pesca who harbors deep and deadly secrets which belie his cheerful countenance. Still, he is a great help in bringing about a satisfactory ending to this harrowing Victorian tale of greed and malevolence in the undaunted face of true love.

I do hope that if you're not familiar with Wilkie Collins THE WOMAN IN WHITE, you will rectify that oversight immediately. But make sure you have the time to set aside. This is definitely a book that will keep you turning the pages to see what happens next until the wee hours of the morning. I loved it. 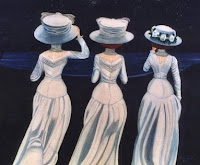 Thanks to Kathy for the idea to use 'As THE WOMAN IN WHITE Turns' for a title.
Posted by Yvette at 3:06 PM