Forgotten Film Tuesday: WHEN WORLDS COLLIDE (1951) starring nobody you know...

...unless you are a movie geek like me: Barbara Rush, Peter Hansen and Richard Derr. Regardless, I have a great deal of affection for this George Pal film based on the book by Edwin Balmer and Philip Wylie and directed by Rudolph Mate.

I am told that the production only had a budget of maybe three bucks. (They did pretty well with those three bucks, actually.) There are many corny screenplay and production value things NOT to like about this film, and yet, remarkably, it all still works/worked for me on some gut emotional level that's hard to pinpoint. WHEN WORLDS COLLIDE lives pleasantly on in my jumble of memory.

My first viewing of the film came on a double-bill with last week's 'Forgotten' film - WAR OF THE WORLDS. (Though WOTW was a 1953 film and WWC was 1951.) I hadn't, by the way, meant for this meme to turn into an all sci-fi all the time sort of thing, and I assure you, it isn't, it won't. Just coincidence this time out since both these movies came into my life together.

My brother, with whom I first saw the films once upon a time, reminds me that WAR OF THE WORLDS has probably held up better over the years, though at the time, he liked WHEN WORLDS COLLIDE best. I'm not all that sure I agree, but I did (and do) like both films enormously. A lot of that affection, I admit, may have something to do with the fact that I was an easily impressed adolescent when I first saw these movies in a theater with a bunch of other kids.

Today's review is an entry in the weekly Forgotten Films meme hosted by Todd Mason at his blog, SWEET FREEDOM. Check over there to see what other films other bloggers are fondly reminiscing about.

Okay, here's the gist of it: The title of the film sort of gives it away - WHEN WORLDS COLLIDE -  Got it? Some planet or moon or star - can't remember which - is on a collision course with earth according to all the top 'in the know' scientists equipped with telescopic photo proof - proof that the government is not all that anxious to make public. The storyline is all about the coming end of our world and how groups of valiant humans work together under extreme pressure-filled circumstances to try and save the human race. (Well, not ALL the human race, as you will see.)

Enough money is raised (from philanthropists AND from a rather nasty old moneybags, Sydney Stanton - played by the perpetually grumpy John Hoyt - who intends buying his way onto a new world despite his age and the fact that he is paralyzed from the waist down) to build several ships to ferry a select few humans to the planet Zyra (it is this planet's star/sun that is about to collide with earth - I think). I would have assumed that Zyra AND Earth would both be destroyed in such a large conflagration, but maybe I'm not remembering it correctly and after all, I'm not an all-purpose, all-knowing scientist. At any rate, all we need know is this: a big collision is coming and earth will be destroyed.

Other space ships are spoken about in the film I believe, but we only see the building of one. Scientists think planet Zyra may support human life, hence the rocket ship plan is a desperate, last-ditch effort - the only way a few groups of survivalist 'earthers' might be able to survive long enough to keep the human race from extinction.

The usual personal stories (some sappier than others) are woven into the frenetic plot. (Disaster films always have their own brand of 'slice of life' stories to tell - it's a given.) One of the pilots - who has practically stumbled into the whole survivalist scene by sheer happenstance - is David Randall (played by Richard Derr) who is a ladies' man, a live-and-let-live sort who suddenly finds himself in love with the head honcho's daughter, Joyce Hendron - played by Barbara Rush, a good actress who went on to co-star in lots of 50's and 60's melodramas, the kind they just don't make anymore. She had a likable screen persona, a woman who had no trouble tearing up at the drop of a sad plot point - she had a way of going all dewy on cue.

Joyce's father, Cole Hendron (played by Larry Keating) is the chief scientist in the whole rocket ship scheme. The problem is Joyce is engaged to Dr. Tony Drake (played by Peter Hansen, a nice enough sort who made a career of playing the rejected suitor), so there is plenty of significant eye contact and emotional tension between the three 'youngish' leads, over and above the idea that they may all very well be dead in a couple of weeks.  As the days and hours march on, we see the ship in various stages of completion. It's a nice. smooth-skinned, pointy-nosed rocket ship - all the rage in the 50's - which will be operated on a kind of catapult like structure that looked to me like nothing more than a long trestle bridge heading up a mountain-side. Well, maybe because it was a long trestle bridge heading up a mountain side, Yvette. 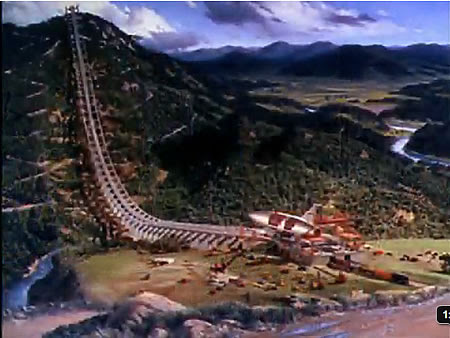 This space 'ark' must be completed by a certain date or the human race is kaput. This catastrophic certainty adds a nice edgy exigency to the film as the days go by, the clock ticks, and the collision is imminent - the pressure's on!

My favorite part of the film is the gathering together of all the workers who volunteer to build the ship - scientists, chemists, physicists, engineers, designers, mechanics, metal workers, welders, etc. all working side by side. Not to mention, of course, that the passengers themselves must include all sorts of specialists who will help build a new world as well as young men and women to propagate that world. (I wonder if any artists made the cut. Just curious.) The ships are very much a Noah's Ark sort of enterprise with assorted farm animals coming along too, for the necessary ride.

The unpalatable truth is this though: Not everyone who is building the rocket ship will be able to board her. The last voyage is not for everyone. The ship just isn't big enough. There will be a strict lottery in the last few hours to decide who gets to go. How this lottery is handled and how the workers left behind react and how nasty Sydney Stanton gets his comeuppance is done very well. The best parts of this particular sci-fi film are, I think, the various personal dramas which are inter-woven throughout the main thrust of the story - I never thought I'd hear myself actually saying this. Usually, it's the personal Sturm und Drang that drags down a movie of this sort, but in this case it's what keeps WHEN WORLDS COLLIDE (sappiness and all) from being a dud, in my book.

But then there's this other unpalatable thing as well: Something that always struck me, even when I was a kid: there were no black people on that ship. No Hispanics either, at least none that I could spot. There was NOBODY who wasn't mostly white - 1950's style. Even as a kid I thought this kind of odd. But keep in mind that this film was made in 1951 - even science fiction often reflects the society in which it is created. So, to put a nice face on it, we made believe that non-whites were on the other ships. The ships we didn't see. Surely this couldn't have been the only ship to have made it. Yeah, sure. It hadda' be that way.

Finally, in the end, the ship takes off as minutes later, the two huge masses collide in the distance. Earth is obliterated. It's all done pretty well, really. The landing on the new world is shown briefly as the film ends on a hopeful note. 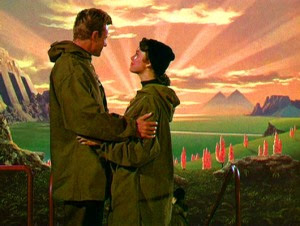 It looks like a cartoon backdrop, but you know, sometimes you just have to half-close your eyes and make-believe that a certain intended thing just is.
Posted by Yvette at 1:00 PM