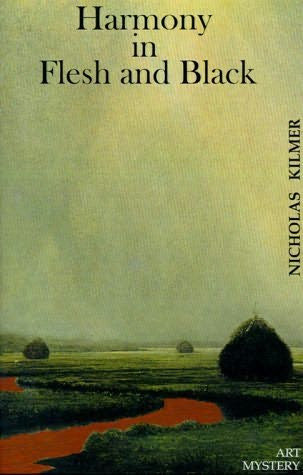 Author Nicholas Kilmer - an art historian in actuality - writes one of my favorite (and lesser-known) mystery series. It features Boston Brahman art collector Clayton Reed and his art-loving henchman, Fred Taylor. Who knew art collectors needed henchmen? Well, the very eccentric, paranoid and esoterically inclined Clayton Reed definitely does.
HARMONY IN FLESH AND BLACK (1995) is the first in the Reed/Taylor series and a heck of a debut. Kilmer had previously written a memoir about a house in Normandy, but HIFAB was his first fiction attempt. When I first discovered it several years ago, I couldn't help but be thrilled because of my over-fondness for mystery/thrillers set in the art world. There aren't many of them, but the few I've read I've been fortunate to love.
Clayton Reed is the wealthy owner of a Boston townhouse in the famous Beacon Hill district. There he is free to conduct his art collecting and indulge his eccentric lifestyle. Fred Taylor is his business associate and trouble-shooting henchman. He works out of an office in the brownstone when he's not off chasing clues to heretofore undiscovered masterpieces and the mysteries surrounding them. Those mysteries often involve murder and dark doings among the paintbrushes.
Who knew the art world was this violent? Yeah, turns out it's a cutthroat world. The acquisition of paintings in the auction room or elsewhere, is not for the faint of heart.
The stories are told from Fred's point of view. He's a Vietnam vet who owns a house in Boston but doesn't live in it. He allows the house to be used instead, as a rest stop for vets with various problems and lack of funds. Fred currently lives with his sensible librarian girlfriend Molly (a terrific character) and her two kids.
Fred is an enigmatic guy with pesonal connection problems of his own. His understanding and appreciation of fine art is what makes him different from your average tough guy. He is someone who doesn't suffer fools lightly except when he's ferreting out a lost masterpiece. A smart guy who sometimes pretends otherwise and allows his rugged appearance to do most of the talking for him.
"I've come for the painting," Fred said.
Smykal flinched. People often flinched the first time they saw Fred. He was large and had a face that made people remember things they wanted to forget.
In this first book in the series, Fred stumbles over the dead body of a has-been collector just hours after buying an unsigned painting of a nude from him. Fred and Clayton suspect the painting may be that of a major American artist. Once the police are involved, Fred must keep Clay out of the limelight, always keenly aware that Clay doesn't function well under pressure and may say or do something which will put the kibosh on the ultimate prize: the painting.
There are many things I love about these books including the main idea that Fred's basic job, aside from the acquiring of paintings and solving their mysteries, is to keep Clay from being his own worst enemy. These are two terrifically written characters who are not really friends, but who depend on each other for what each of them needs: Clay needs to acquire great art and Fred needs to be around great art. It's an unusual relationship that works.
In the opening paragraphs of HARMONY IN FLESH AND BLACK, author Kilmer offers one of the best descriptions of the art process I've ever read. From these moments on, I was enamored of this series.
The dark-haired woman reaches into the pond to gather lilies, frozen amid slashes of yellow blooming flags, the captured light struggling against cloth, the paint laid out to stretch and dry. That's violence, Fred was thinking. There's nothing innocent about it, nothing safe anywhere in the operation. He looked across the downstairs room he worked in, at the painting he had pulled out of the bins to think about while keeping his mind clear.
Art is violent from its inception. As long as he had worked for the man, Fred had not been able to make Clayton Reed recognize this. It's dangerous, Fred was thinking, not to understand the nature of your opponent, to believe it simply lazy, languid, beautiful, and harmless. It's dangerous to collect and keep it around you, not knowing what it is.
Fred loved pictures, but not the same way Clayton Reed did. Clay acquired them with the enthusiasm of those who collect stamps or rocks or money, as objects they believe have been above the dirty tug of living in the world. For Fred a picture was alive, an animal, something whose design and color had a feral purpose.
This made Fred the hunter, the guide, the beater, out front - with Clayton often hanging back, rising above, perched on his elephant, his rifle ready. These days they were both edgy on account of the big project they were working on, which something, they both knew, could blow out of the water any minute.
Great stuff. A terrific series, too good to be missed.
Link to the fantastic fiction website which has a list of all of Nicholas Kilmer's books.
Link to my own review of Kilmer's latest in the series A BUTTERFLY IN FLAME.
Link to Forgotten Fridays blog contirbutors at PATTINASE (Patti Abbott's blog).
Posted by Yvette at 12:30 PM