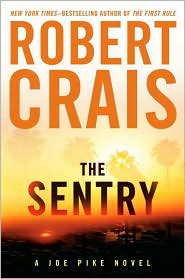 When I read a terrific book I can't wait to tell everyone about it. (I waited on this one though 'cause I finished it last week and wanted to save it for my review today. But it was hard.) As I've mentioned before, Robert Crais is one of the very best writers working today. His Elvis Cole and Joe Pike books are my favorite modern detective series. There are few writers who can

match R.C.'s talent for quick characterization, breathless plotting and for making the men in his books more than one dimensional killing machines.
R.C. laid the groundwork for Cole and Pike's relationship years ago with books set mostly in L.A. and written in the first person from Elvis Cole's often jaunty point of view. Where R.C.'s series excels is in the book-to-book's unwavering devotion to that friendship. Part of my expectation as a reader of this series is to be reassured by the continuation and strength of Elvis and Joe. It is the hub around which all of these stories turn.
When the vegetables were good to go, Cole went upstairs, changed into a T-shirt, then returned to the deck to fire up his Weber. The sky was a beautiful sangria by then, and inspired him to have another beer.
When Cole went in, Joe Pike was in the kitchen. Unannounced and silent as a ghost. The cat was twined between his ankles, purring. Pike was the only person besides Cole the cat would abide.
"White bean salad with grilled veggies we can share. Maybe a little couscous. Carne asada for me. Sound good?"
"Good."
Sure.
Notice how the loyal friend prepares his subject for the evening's festivities.
"I'm having a beer. Get one, then you can fill me in while I'm prepping the coals."
Pike took a beer from the fridge. Cole grabbed a third, and followed him out. The cat trailed behind them. He liked to watch the slope for field mice and gophers.
Cole pushed at the coals, which was a completely unnecessary act. Notice the immaculate technique as the World's Greatest Best Friend stalls the moment of truth.....
Later, that evening, when Elvis is forced to reveal some unpalatable truths to Joe:
...Pike remained motionless, floating at the edge of the deck. Cole wished he could see behind the black glasses, but that view was hidden.
....His phone rang. Cole wasn't going to answer, but decided to give Pike some time. He covered the grill then inside for the phone.
.....When Cole put down the phone, he went back to the deck. He wanted to share the one piece of good news he'd gotten that day, but when he stepped outside Joe Pike was gone.
"Joe?"
The cat was gone too.
"Joseph?"
The canyon swallowed his voice.
I think a great part of what R.C. is writing about is this idea of the bond of friendship and what it means, how it develops. How friendship itself becomes a stabilizing force. Without giving anything away, I can say that the very satisfactory ending of THE SENTRY continues to perpetuate that ideal.