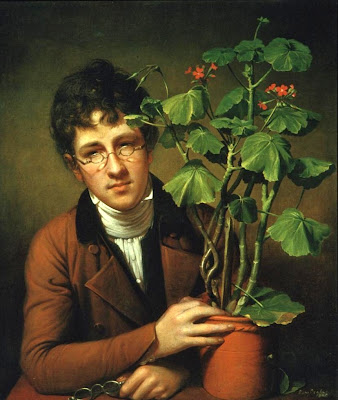 REUBENS PEALE WITH A GERANIUM by his brother, the American painter, Rembrandt Peale. (1778 - 1860) Talk about the pressure of a famous name!

I first saw this painting years ago on the cover of an Amercian Artist magazine. I had a visceral reaction: I held my breath. I've said before how some paintings occasionally do that to me. Well, this one did. I loved it immediately.
I knew nothing about the artist except that he, as well as his brother, had most colorful names. I read a little about him, then cut the painting from the magazine and pinned it on one of my bulletin boards. Over the years when I moved, I lost track of the painting. Recently I came across it once again in one of my books. This time I have a computer so, abracadabra I looked up Rembrandt Peale and found out more about him. Today's post is my effort not to misplace his splendid painting again.
Peale painted about 600 works in his long lifetime, many of them portraits of the famous of his time, i.e. George Washington, Thomas Jefferson.
But my favorites remain the gentle portrait of his brother, a gardening enthusiast, and his own self-portrait, below. 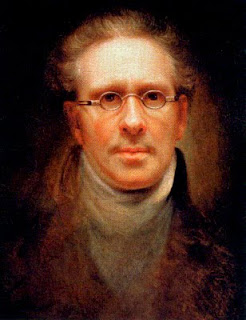 A disturbing and entirely personal aside: according to Wikipedia, Peale's mother gave birth to 17 children - only six of whom survived to adulthood. 17 children. She died when Rembrandt Peale was 8 years old. (Not, I think, much of a surprise.) It's a wonder to me that feminisim and the idea that, perhaps, women should have some control over their own bodies, took as long as it did to take root. It's a wonder to me that more women didn't, don't, more often, go berserk. At least in history. (No wonder Thelma and Louise dived off that freakin' cliff.)
Rembrandt Peale married, and his wife went on to give birth to 9 children. Maybe she ran out of stamina.
Posted by Yvette at 12:21 PM