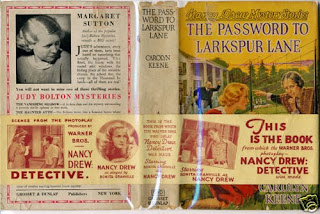 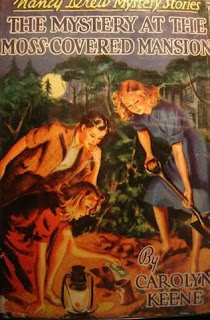 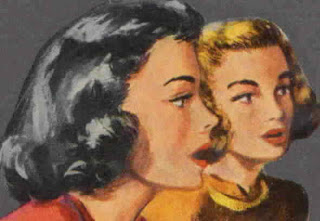 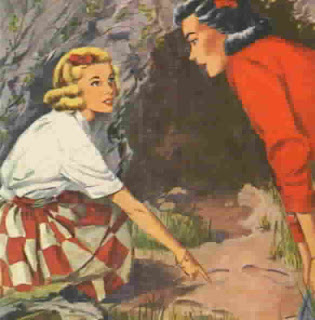 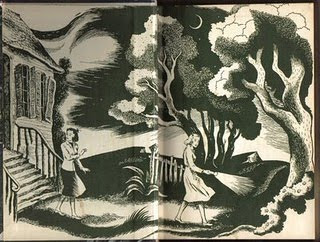 For the Letter D, I couldn't choose between Nancy Drew and The Dana Girls, so I've decided to write about both. For me, a young Puerto Rican girl growing up on the lower eastside of Manhattan, attending NYC public schools, you'd think the Nancy Drew stories couldn't have been further from my life experience if I'd lived on the moon. You'd be right. (It turns out that Supreme Court Justice Sotomayor - growing up as I did, in NYC - is also a member of the Nancy Drew Sisterhood.)

Read this short piece from the Deseret News, on why all sorts of women have Nancy in common. It only goes to show you that readers do not, necessarily, always want to see mirror images of themselves in what they read. Despite the social and racial chasm between Nancy Drew's priviledged way of life and my own, the moment I read my first Nancy, something clicked. This was the dream world I coveted. I wanted to be a girl with important things to do, wanted to be a girl in charge, a girl with mysteries to solve. Best of all, I wanted a nice blondish page boy hair-do. How, I wanted that hair-do! Never mind that my hair was black and curly. But, most of all, I coveted Nancy's ride - the little yellow roadster of my dreams. (I don't remember if it was actually yellow, but in my mind it will always be the golden yellow of an egg yolk.)

I never did get to own the little yellow roadster, but I did, vicariously pal around with Nancy and the Dana's for years. From the dark and dusty shelves of my memory bank, I vaguely remember that my favorite of all the Nancy books were THE MYSTERY OF THE MOSS COVERED MANSION and THE HIDDEN STAIRCASE. But there were several others I loved as well. And I still do have a great deal of affection for the vintage early covers. The newer covers, years later, just never did it for me - they were so hopelessly banal in design 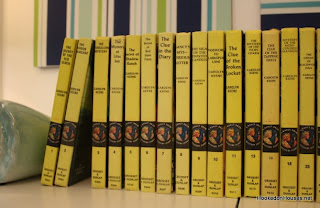 Nancy Drew, as most everyone knows, was a teenage girl who lived in the fictional town of River Heights with her very accommodating father, attorney Carson Drew, and their housekeeper, Hannah Gruen. Nancy's mother died when she was a young girl. Nancy has a hapless sort of boyfriend, Ned Nickerson and two gal pals, Bess Marvin and George Fayne, who help her in solving the various mysteries she's always running across.

After I'd read my fair share of Nancy Drews, I discovered The Dana Girls books. Truth be told -now I can admit it at last: I always favored The Dana Girls books. There was just something special about the idea of sisters (all I had was a pesky younger brother) working together to solve a problem, sharing danger together. The Dana girls were orphans who, despite having to attend school, still managed to get away enough times to solve whatever mysteries came their way. They lived with their Aunt Harriet and Uncle Ned, who were brother and sister.
The books are similar in tone and story to the Nancy Drew books, except for the Dana girls' family relationship. I think The Dana Girls would have made terrific movies, but I don't believe they were ever filmed. Of the Nancy Drew films over the years, I've always favored the ones from the 1940's featuring Bonita Granville as Nancy. Bonita gave new meaning to the word: spunky. She could be annoying, but mostly she was a hoot.
One day a few years ago, I was in one of those antiques/collectibles shops where anything is possible, when under some stuff in a corner I spied a vaguely familiar blue cover. It was a Dana Girls mystery - something I hadn't seen in many years. I let out such a squeal of joy that the few people in the shop all turned to stare. But far from being embarrassed, I was thrilled. The owner came over thinking something was wrong. I explained and apologized for scaring everyone - but I was overcome by joy at coming across a piece of my childhood. Long story short: Bought the book and took it home. THE SECRET OF THE JADE RING now has pride of place in my kitchen bookcase.
In truth, I remember very little about either of these series except that when I think of them now I immediately feel good. I know these books helped me manage the difficulties of adolescence simply by taking my mind off the various agonies of the day. And maybe, promising me, in some vague way, that somewhere out there was a world where being a teenager wasn't a curse. What could be bad about that? Nothing much. This post is my entry in this week's CRIME FICTION ALPHABET 2011 - for the Letter D. A meme hosted by Kerrie at Mysteries in Paradise.

Link to Unofficial Nancy Drew Fan Website.
Link to a Dana Girls Website listing the titles and history of the series.
Note: I do not endorse any websites offering to sell collectible Nancy Drew or Dana Girls books or merchandise, simply because I've never bought any online. I merely enclose links for information's sake.