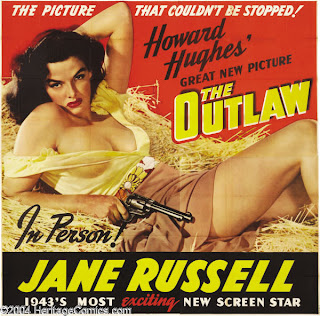 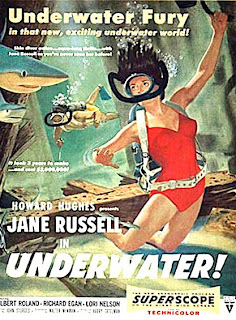 Sad news. The one and only Jane Russell (1921 - 2011) has died at the age of 89. I remember her most playing opposite the shiny blondness of Marilyn Monroe in GENTLEMEN PREFER BLONDES (1953). But also in SON OF PALEFACE (1952) with Bob Hope. Over the years she starred in several dark and moody films noir with Robert Mitchum, Jeff Chandler and other hunks of the era.
Never the best actress, she still had a magical physical presence. She could hold her own with anyone and often outshined her co-stars. She wasn't classically beautiful, but the camera just loved her. She also always seemed to have the look of a good-humored dame about her. Despite her offbeat beauty, it wasn't hard for women to like her.
In GENTLEMEN PREFER BLONDES, obviously a film tailored for Monroe, Jane looked perfectly comfortable playing second banana. (Whether in reality she was or was not, I don't know. But on film I never saw any friction or undercurrent of resentment.) Jane always looked comfortable in her own skin.
R.I.P Jane.
Thanks to the Daily Beast for the heads-up.
Posted by Yvette at 7:49 PM