My Favorite Reads: Two by Rex Stout: PLOT IT YOURSELF & MURDER BY THE BOOK 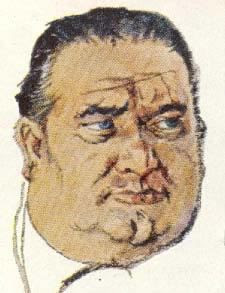 "I understand the technique of eccentricity, it would be futile for a man to labor at establishing a reputation for oddity if he were ready at the slightest provocation to revert to normal action." Nero Wolfe

These two Nero Wolfe titles don't qualify for the Vintage Mystery Challenge because I haven't re-read them lately, but they are such great favorites of mine (I do reread them religiously every few years) I thought I'd include them in the My Favorite Reads category. And, since both are books about books and publishing, I'm posting them together.


With Wolfe, eccentricity is key:


1) The thousands of orchids in the glass greenhouse on the roof of the brownstone. The unbreakable 'orchid time' daily schedule.
2) The excessive beer drinking. The bottle caps always placed in the top drawer of his desk as Wolfe finishes the beer. Then the end of week tallying up of just how much he drank.


3) The gourmet meals of cook, Fritz Brenner. Wolfe will only eat out at one restaurant in all of NYC: the one owned by a friend from his Montenegro days. Otherwise, he eats at home.


5)The 'I never leave the brownstone on business' routine.


9) The idea that women can't write a good novel, well, except for Jane Austen, of course.


10) Hamburgers and french fries are never served at the brownstone.


MURDER BY THE BOOK (1951)
With Rex Stout's Nero Wolfe and Archie Goodwin stories, you never know what kind of murder you're going to get - kind of like Forrest Gump's box of chocolates. In some of the cases, the murder is neat and tidy and only one victim is rubbed out. In other cases, there may be multiple victims but again, there's not much imagined bloodletting. And then there are the cases like the two I'm talking about today where the murders are particularly awful. (Don't worry, there's not much blood description, but it's just the sheer awfulness of the thing.)


These are nasty murders committed for motives that seem, on the face of it, hardly worth the shedding of so much blood, especially innocent blood. I don't like it when the victim or victims are killed because of some bit of knowledge they possess. That's one of the hardest motives to accept, at least for me. It's always so much worse than if the victim were involved, somehow, in his own demise by, either, acts of stupidity or greed or hateful behavior or even, for having too much money. Know what I mean?


In MURDER BY THE BOOK, Homicide's Inspector Cramer (Wolfe and Archie's friendly enemy on the force. Don't know what else to call him since they're not, by any means, pals.) audaciously (and I mean, audaciously) shows up at the brownstone on West Thirty-fifth Street with a list of names. Names unrelated to each other, names that make no sense to him. He's hoping to pick Wolfe's legendary brain for a clue, an idea, anything that will send him off in the right direction in a current murder investigation.Wolfe, as usual, is affronted, and manages to annoy Cramer with an abrupt dismissal.


"...Yeah. But we're only human. I just thought I'd show it [the list] to a genius and see what happened. With a genius you never know."


"Well, by God, I hope you'll excuse me" - Cramer got up. He was sore, and you couldn't blame him - "for taking up your time and no fee. Don't bother, Goodwin."


He turned and marched out. Wolfe bent over his crossword puzzle, frowned at it, and picked up his pencil.


Cramer's crack about no fee had of course been deserved. Wolfe hated to start his brain going on what he called work, and during the years I had been on his payroll the occasions had been rare when anything but a substantial retainer had jarred him into it. But he is not a loafer. He can't be, since his income as a private detective is what keeps that old house going, with the rooms on the roof full of orchid plants, with Theodore Horstmann as tender, and Fritz Brenner serving up the best meals in New York, and me, Archie Goodwin, asking for a raise every time I buy a new suit, and sometimes getting it. It takes a gross of at least ten thousand a month to get by.....Then nearly six weeks after the day Cramer dropped in to see what would happen if he showed a piece of paper to a genius, and got a brush-off, a man named John R. Wellman phoned on Monday morning for an appointment, and I told him to come at six that afternoon.


Well, as so often happens with Wolfe, these little office contretemps are just preludes to murder. In this case, very cruel murder.


There will be three murders in this particular book. Once Wolfe takes on John Wellman as a client to find out who killed his daughter, a young woman from Peoria who worked as an editorial assistant (reading submissions from the 'slush pile' of unrequested manuscripts), the die is cast and deadly events set in motion. As soon as Wolfe links the names on the original list Cramer had briefly shown him (still alive in his photographic memory) six weeks earlier, a particularly ruthless killer is off and running.


PLOT IT YOURSELF (1959)
This book has one major 'fault', but it's not one that can't be explained. Wolfe does so in a throwaway sentence or two near the end when all involved are sitting in his office waiting, none too patiently, for the explanation of the crime and revelation of the murderer. This is all typically done in Wolfe-ian style. Where would we be without the revelatory office denouement? Count me in - I love these sorts of endings. They're not only satisfying, but they make things nice and tidy.


But for this 'fault' - PLOT IT YOURSELF would be a nearly perfect mystery. Again, the motive is knowledge. The quick-witted killer goes on a murder bender to protect injurious knowledge from becoming known. This is one case where Wolfe is up against someone who, he admits at the end, is brazenly fearless - acting as needs arise with a particularly cunning viciousness.


Author Amy Wynn, writer of a current debut bestseller, her publisher and her agent hire Wolfe to find out who is attempting blackmail by accusing her of plagiarism. Turns out this same ruse has been tried before and quite successfully, on several well-known authors. They, unfortunately, have either settled or gone to court and been forced to pay big money to the accuser. The cleverness of the ruse, once explained, is immediately apparent and yet, even knowing how the thing is worked hasn't prevented it from working. (It is such a brilliant con, that I won't reveal it here. If you've read it, you'll know what I'm talking about. If not, you're better off learning it fresh from the story.)


Wynn and her people want to fight back. Wynn is especially incensed since this novel is her baby, her ticket to the big time. Wolfe is not happy being hired by committee, so he makes arrangements with the publisher, since his fee, as he explains it, in this type of case, might be enormous. (Note: in those days, publishers actually had more money than their authors.)


Once Archie begins talking to the previous victims of the plagiarism con, dead bodies start popping up. Again, a frantic and particularly vicious killer is on the loose.


If you've never read any Wolfe books, I hope this post intrigues you enough to make you take a good look and maybe realize you've been missing out on some pretty terrific writing. I am an unabashed fan of Rex Stout and my admiration knows no bounds. I've lost count of how many times I've read and re-read my favorites and MURDER BY THE BOOK and PLOT IT YOURSELF are definitely two of them.


A few other Nero Wolfe favorites:


THE RUBBER BAND
THE LEAGUE OF FRIGHTENED MEN
WHERE THERE'S A WILL
THE DOORBELL RANG (In which Wolfe and Archie take on J. Edgar Hoover's FBI and win!)
THE GOLDEN SPIDERS
AND BE A VILLAIN
THE FATHER HUNT
THE RED BOX
PLEASE PASS THE GUILT
BEFORE MIDNIGHT
IF DEATH EVER SLEPT
...and on, and on and on.


A link to read about Rex Stout, his amazing life and work.


A link to the Nero Wolfe admiration society known as The Wolfe Pack.
Posted by Yvette at 2:54 PM