Just Wondering: Can a man write a good cozy mystery? 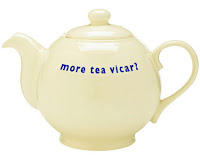 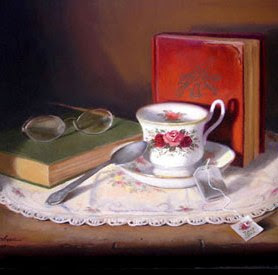 Because the day was so grim, gray and melted snowy, rainy sloppy, I am thinking a good cozy mystery would just hit the spot. (Reading one now, but I need, well...a cozy back-up.) As I'm cruising through my book shelves looking for something appropriately comforting, I notice that, among my 'cozies', there don't seem to be many male writers.
I wonder why that is. Aren't men capable of writing 'comforting' type words? Of course they are. But maybe cozy mysteries require something more than comfortable words. They require a good mystery yes, but they require a certain kind of mystery atmosphere with the murders mostly happening off-stage. But it's the atmosphere that makes for a cozy, I think. At least my kind of cozy. But, surely, men are capable of creating comforting atmosphere and a few 'not in your face' murders.
Let me double check my shelves once more.
Okay, bingo! These men come close. (So the answer to my initial question is yes, but rarely.)
The late Stuart Kaminsky with his Toby Peters private eye mysteries set mostly in and among the quirky movie people of 1940's Los Angeles. Favorite title? Mildred Pierced. Yes, it features Joan Crawford as a murder suspect/actress in distress. Funny.
Ed Gorman with his Sam McCain series set in 1950's small town Iowa. Each title is the name of a rock and roll song of the times. i.e. Breaking Up Is Hard To Do.
Parnell Hall with his Stanley Hastings private eye series set mostly in NYC and also his crossword puzzle lady mysteries. (Full disclosure: I read and love the Stanley Hastings series, but don't read the Puzzle Lady series, possibly because I dislike crossword puzzles.)
Jeffrey Cohen with his wonderful series featuring Aaron Tucker, small town NJ magazine writer and solver of myseries. Also his Elliott Freed movie theater mysteries, set in NJ. One title: For Whom the Minivan Rolls.
Alan Bradley with his multi-award series set in 1950's England and featuring a 12 year old protagonist is the closest to the perfect male cozy writer as I can come. No, not close. He is a male cozy writer, period.
Alexander McCall Smith (I've only read The Number 1 Ladies Detective Agency, but that qualifies for sure.) So, okay, so there are some who are DEFINITELY writing cozies.
Peter Abrahams (Writing the quirky Echo Falls mysteries.) Yup, definitely cozies. Though not as 'warm' as I would ordinarily like a cozy to be.
These seven series all have one thing in common: humor. Three are private eye series, one - the Sam McCain series, might as well be. Sam is a small town lawyer who solves murders almost against his will. Jeff's two heroes are a freelance writer and a theater owner. Flavia de Luce, Bradley's solver of mysteries, is a budding chemist. In Echo Falls, it's mostly the high school kids who solve the mysteries.
(There's also EJ Copperman, whose NJ cozy I read last year and loved. Not sure if EJ is a man or woman, though since Copperman is a pseudonym. My suspicion is that Copperman is a man.)
But that's it, cozy writer-wise, for the male population currently living on my bookshelves. And really, except for Peter Abrahams, Alan Bradley and Alexander McCall Smith, the others are 'almost' cozies. Not 100 percent sure they qualify. As much as I love these books, they are not what I reach for when I need a 'comfortable' mystery read. What do you think about all this? Do you read cozies? When and where? Must a cup of tea be nearby? Men and cozy cups of tea....not so much. I mean, men drink tea, yes. But, you know what I mean. I like my tea with butter cookes, little crackers with slices of cheese and a strawberry or two. A man usually sneers at this sort of thing. HA!
In contrast here are the women writers all but pushing Stuart, Parnell, Alan, Alexander, Peter, Ed and Jeff off my bookshelves. The following are all read by yours truly and safely vouched for:
And these are only names of the ones I've read. There are many others who qualify as cozy writers out there, I just haven't gotten around to reading them.
The main thing that must happen when I think of a cozy read is this: I must smile. A cozy, above all else, must evoke a smile. Maybe a smile of recognition. A smile that leads to a warmth of rememberance and the promise of comfortable company and a good, well written story. That's it.
Maybe it's just that most writers write to their audience and most males, let's face it, probably don't read cozies. More than likely spy thrillers are to men what cozies are to women. Agreed?
Maybe it's just a girl thing.
Posted by Yvette at 4:16 PM