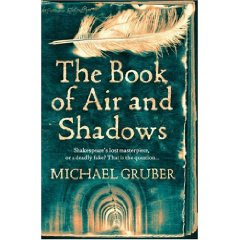 G is for Gruber. Michael Gruber. Whose book, THE BOOK OF AIR AND SHADOWS is a special favorite. I am a major fan of mystery/thrillers set in the world of literature and/or the 'visual arts'. Gruber has written two. This one and THE FORGERY OF VENUS (set in the art world) which I am saving for the letter V, I think.

Anyway, THE BOOK OF AIR AND SHADOWS (2007) concerns the murderous search for some papers possibly written by none other than William Shakespeare, the one and only. So you can see where tempers and emotions would run high in a chase of this sort. Newly discovered Shakespearean ephemera of most any sort would sell in the millions of dollars at auction. Yes, people will murder for bits of 16th century paper - as long as Shakespeare came remotely close enough to, maybe, sribble something or other in the margins. In this case, there appears to exist much more than just a scribble or two.
The gist of it:
Jake Mishkin (love that name) is a New York intellectual property lawyer with a good sense of the ironies of life who is suddenly thrust into a deadly game of literary hide and seek. The novel is divided into three venues: Jake's wry first person observations as he runs about, often bewildered and in fear for his life, the third person story of two other characters, Alberto Crosetti, rare books clerk from Queens and the enigmatic Caroline, also in search of a mysterious manuscript that might or might not have something to do with Shakespeare, AND finally, the actual 16th century pages themselves, the Bracegirdle Letter. So we also have a bit of an epistolary thing going on as well. Interspersed within this frenetic search is a mysterious and shadowy killer who will - all together now - stop at nothing to get his hands on the elusive, long lost treasure. (IF it exists at all.)
Normally I don't enjoy books that flit from section to section like this, for me, it interrupts the flow of the story. Especially when I am enamored of one particular character, like for instance, Jake Mishkin. But author Michael Gruber knows what he's doing and does this sort of thing very well. His writing talent overrode my initial hesitation.
THE BOOK OF AIR AND SHADOWS also has another major main attraction: a very satisfying surprise ending. At least it was a surprise to me since I was expecting just the opposite.
This is a terrific book. Read it. If you haven't already.
The letter G for Gruber is my entry in Kerrie's Crime Fiction Alphabet 2011 Meme. Please go to Kerrie's site for the rules and for a list of the other contributors and links to their posts.
Posted by Yvette at 9:56 AM

Email ThisBlogThis!Share to TwitterShare to FacebookShare to Pinterest
Labels: Crime Fiction Alphabet 2011, MIchael Gruber, The Book of Air and Shadows