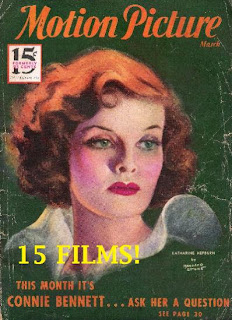 Okay, same as we did with 15 Authors a while back: Right off the top of your head, think of 15 films that affected you specifically (for whatever reason) over the years, films that stay with you, films that, if you stop to think for a moment, always make you feel something, maybe undefined, but definitely worth remembering. Films in which you can still see certain scenes play in your head if you focus. Films that just plain live on in your memory, no matter what. (Even if all the memory you have is 'old-lady memory' just like moi.)
Here's the trick: You only have 15 minutes to do this, so the films must, obviously be ones that are sitting there just below the surface, waiting for you. (Not even the best films you ever saw, but films that are just there, hanging around and always ready to be talked about.)
Today's fifteen: (Subject to change at any moment.)
What are your 15?? Quick, quick, off the top of your head!