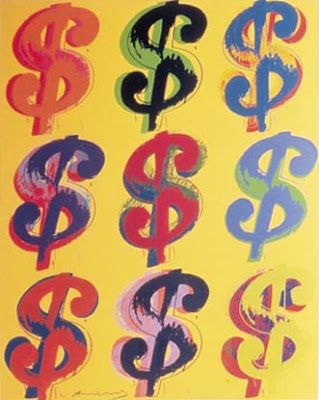 Not so much a favorite painting, I prefer Andy Warhol's early illustrations, especially the fanciful ones he did of shoes and women - way before he became the King of Pop Art. But like his work or not, he had some interesting things to say about fame, artificiality and the state of art in the 60's/70's.

In the future everybody will be world famous for fifteen minutes.
Was Andy prescient or what?

I thought the dollar sign painting of Warhol's was especially appropriate for Oscar Extravaganza Weekend. Will you be watching tomorrow night?

I admit in the last few years I haven't watched. But I did like looking at the Oscar fashion parade - the red carpet. I'm afraid a lot of what Oscar is about can be distilled into those few minutes of ersatz fashion we all love to view in the moments leading up to the Big Reveal.

Usually the Big Reveal turns out to be nothing much but anti-climax. The favorites win and the rest don't. Rarely is there a surprise. But if a surprise should occur, most of the pundits seem affronted. No one likes the length of the show. No one really, it seems to me, likes the whole orgiastic tone of the thing. And now I see, they're trying desperately to attract a 'younger crowd'. Supposedly us oldies are dying off and soon there won't be an audience left who cares about the Oscars. I assume that's the reason for the two young actors playing hosts this year. Young actors whom I've never heard had more than rudimentary 'real' life personalities. Actors are not the characters they play. But maybe these two will surprise everyone with their wit and charm. (Already, before the show even begins, the NY Times Oscar site was making fun of the two. Honestly, what chance do they have?)
Or maybe the 'younger crowd' today doesn't care about wit and charm. You could easily convince me of that.
The problem has always been, I think, that no one can seem to figure out whether the Oscars is an awards show or a variety show. Combining both as has always been done is RARELY conducive to anything remotely watchable. (Except at The Tony's and nobody watches those except people in New York.) But people tune in the Oscars, I think, to see if or when disaster will occur. (It usually does in some form or fashion at some point.) Or if the show will truly be as boring as the previous year. They watch. And then spend the following week complaining about it. Nobody likes being made a fool of.
Until next year.
Posted by Yvette at 11:15 AM