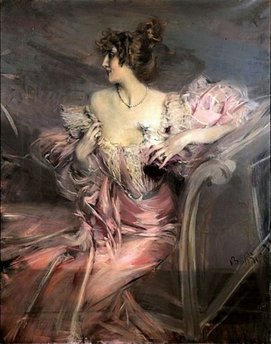 On this sunny Valentine's Day, here is my Short Story which proposes (according to the spirit of the Challenge) to solve The Real-Life 70 Year Old Mystery written about by news sites, newspapers and bloggers last year. Read the real-life mystery and if you're intrigued by it all, read the fiction it inspired. I highly recommend you read the news story first.
An apartment in Paris on the Rue Pigalle, left unattended for 70 years. Amid the dust and clutter, gilded furniture, a giant stuffed bird, various objet d'art, but most intriguing: an undiscovered painting by the famed artist Giovanni Boldini - this much is true and intriguing. The rest, our concoctions, are fiction. Read all about it. *****************************
That following winter I went to stay with my brother at his home in Nice. His health was failing and I wanted to see for myself if he would last the year. We sat and talked on the terrace of the house Martine had lived in, alone, for nearly 70 years. He talked about her more freely then. Her death had released him from his self-imposed restraint.
"Martine was that rarest of women, Jean Paul," he said.
I agreed, as I always did.
"Until the day she died, she never stopped loving father. All her life she kept herself only for him. She would have no other." He looked off into the fading afternoon light. "The painting - stolen by that cochon of a Bosch interpreter, Otto Dietrich. " He spat the name out. "Well, you know the old story. He hoped to ingratiate himself into some Nazi inner circle." Here he stopped and forced a laugh. "Hitler was an art lover. So Dietrich strangled Fleur Gaudiet and left the body for Martine to find - as payment. Martine had repeatedly spurned his clumsy advances." He paused.
I waited.
"But somehow, she managed to get the painting back. I've never known how, never wanted to know. In the process Dietrich himself was killed and so was father. He took the bullet meant for her. That much Martine told me."
I nodded. "The bullet that went through his body, grazed Martine and left her blind."
He let out a sigh. "From that moment, the painting became a deadly thing. But she could not bring herself to destroy it. It was, after all, the portrait of her beloved grand-mama. So she left it in the flat - maybe planning someday to come back for it. But as time passed she put it out of her mind. In the end, she left it for fate to decide. She never spoke of it again, at least not to me."
"And you helped her all these many years. The house. The upkeep on the flat. The monthly check she could not return."
"Father would have wanted me to."
"And you're still sure she never knew of your feelings for her?"
"I only saw her a few times a year, don't forget. Only when something needed doing at the house or she invited me to dinner. She managed very well on her own. I never wanted to pry. But of course I kept an eye out. I did ask her to marry me once - I lost my head - but she turned me down with such sadness I could never bring myself to ask again."
"How could you bear it?" I always asked him. Such loneliness. I never married because of inclination, but Philippe had not married because he could never find a woman to compare to his youthful dream of Martine.
"I loved her, Jean Paul. Only her. It was my joy to take care of her, to see to her happiness in any way I could. I fell in love with Martine when I was 13 and for me, that was that. But it was our father she loved, and he, her. They had just a few weeks together, but those weeks lasted a life time. He gave his life for her." He shook his head. "For Martine, the flat became a tomb, the painting - un malediction."
We sat in silence for awhile. Finally, I poured the wine. "To Monsieur le Comte," I said and held up my glass to the last rays of sunlight.
"And to his beloved, Martine," said Philippe.
Posted by Yvette at 12:18 AM

Email ThisBlogThis!Share to TwitterShare to FacebookShare to Pinterest
Labels: A Short Story, Boldini painting, The Portrait of Mademoiselle Gaudiet