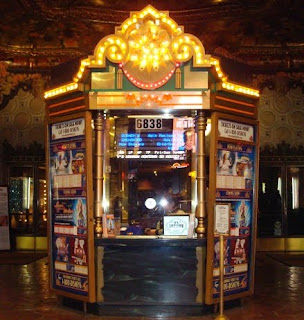 I was going to wait until tomorrow to post this list, the idea for which I've stolen from Peter Swanson at his blog, ARMCHAIR AUDIENCE (Isn't that a great title?) And I LOVE his tagline: Books read. Movies Seen. TV watched. Why didn't I think of that? Well, go see his list and the other major list of a Hundred Best posted by Time Out then come back and see my list. The reason I'm not waiting till tomorrow is this: I'll be running some errands Thursday from early in the morn till who knows when, so how much posting I'll get done is problematic. Plus I owe a post to the Alphabet Crime Fiction Meme (I skipped E, last week, so I'm playing catch-up to with F, this week.) and that's not even written yet...
I haven't seen THE KING'S SPEECH, A SINGLE MAN or TOPSY TURVY, so depending on how I feel about these films when I do see them, the list today may be adjusted at some point down the line. Well, it's all fluid anyway. None of this stuff is cast in cement. LOCAL HERO would have made the list easy except I had to make room for A ROOM WITH A VIEW. So count it as number 11 and BRIDGE ON THE RIVER KWAI is 12. And wait, wait, what about BRIEF ENCOUNTER, DAY OF THE JACKAL, THE SCARLET PIMPERNEL? CASINO ROYALE? (The one with Daniel Craig, of course.) And AN IDEAL HUSBAND and COLD COMFORT FARM? MASTER AND COMMANDER? ANGELS AND INSECTS? Another gem: EDUCATING RITA. See what I mean? Impossible. I give up.
At some point I'll do 10 more, because really, this whole thing is a hopeless enterprise. I've loved British films since I was a kid, so you know there are dozens more that could easily be on this list. But for now:
10 FAVORITE BRITISH FILMS
10) THE WRONG BOX (1966)
Not only a wrong box, but a wrong-headed bunch of characters in a delirium of a funny film set in Victorian England. Michael Caine, Sir Ralph Richardson, John Mills, Dudley Moore, Peter Cook and Peter Sellers. What more can you possibly say?
9) A ROOM WITH A VIEW (1985)
From the extraordinary opening credits to the very romantic end, this is just a gorgeously realized Merchant/Ivory creation based on E.M. Forster's book. I am always spellbound when I watch it. Helena Bonham Carter, Julian Sands, Maggie Smith, Rupert Graves, Daniel Day-Lewis. An embarassment of riches.
8) ORLANDO (1992)
Can't figure out still, what this film is about. But it doesn't matter. It is so breathtakingly beautiful - like sitting in the middle of a painting and letting it wash over you. Tilda Swinton is a national treasure.
7) BILLY ELLIOT (2000)
Working class life as spawning ground for art, in this case : ballet. And, unexpectedly, not a girl's story, but a boy's. Jamie Bell as Billy is spectacular.
6) THE RED SHOES (1948)
Moira Shearer. More ballet. This time as madness. The only thing that throws me off about this otherwise GORGEOUS film are the male actors. Such a bunch of unattractive ninnies I haven't seen since...well, since I don't know when.
5) THE LADY VANISHES (1938)
Alfred Hitchcock at his early best. Michael Redgrave looking good. But the old lady and the two stiff-upper-lip cricket mavens steal the show.
4) BLACK NARCISSUS (1947)
A nunnery on a remote Nepalese mountain top, seething passions, madness, a cold sweeping wind which makes every one just a little nuts and a surly David Farrar. Ah, the stuff of life. Just a sensational film. Moody as hell despite it's bright colors. Sabu as a prince easily distracted and Jean Simmons in her first role, as a peasant beauty who does the distracting. Deborah Kerr, swooningly beautiful as the 'mother' superior.
3) THE 39 STEPS (1935)
Better than the book. Robert Donat is so gorgeous, so sensual, so sexy. And he doesn't even have any love scenes, really. Madeleine Carroll comes close to ruining the film, but she can't help the way the part was written. I love the beginning most when Hanney picks up the spy at the theater and they go back to his flat and he fixes her a fried haddock. Also love the short but heartbreaking sequence in Scotland when Hanney is helped by an extraordinarily valiant woman married to a vicious wretch. LOVE the ending in the music hall. Another early Alfred Hitchcock classic.
2) BABE (1995)
In so many ways, such a beautiful, inventive film. It is funny and charming and just about perfect. A film about life, love, self-worth, honor, innocence and the trust that must exist among friends. That most of the 'friends' are barnyard animals doesn't detract from the story one iota.
1) LAWRENCE OF ARABIA (1962)
Peter O'Toole in the film that turns Lawrence into a god. (Lawrence himself, would have been very happy with it, I think.) David Lean's romanticized view of Lawrence results in scenes of stark, breathtaking beauty though he doesn't spare the story's inherrent violence. The film features one of the most spectacularly effective 'cuts' in film history: the lit match cut to the desert.
Okay, time to list your favorites. Take heart. It's all in fun. Really.
Posted by Yvette at 7:02 PM