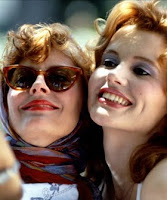 This is not one of my all time favorite films. In fact, it's not even a true favorite at all. But I was reading Robin Bates' blog post on the 20 Year Anniversary of 'Chicks Who Kick Butt' and liked some points he made and wanted to make sure to share. As usual, with Robin's posts, it is thoroughly thought-provoking and not meant to be read in three seconds or less. Robin's blog is one of those whose names I absolutely love: Better Living Through Beowulf. How Great Literature Can Change Your Life. He talks about all manner of things though and he takes seriously, his blog's tagline. I love how he sometimes equates baseball and football with themes and characters from great literature when he's in a sports frame of mind.
Anyway, I basically agree, more or less, with Robin's views and those of his sources. I just thought I'd add my own two or three cents worth today. When we talk about this film, like it or not, it's the explosive ending we talk about. Since, to my mind, everything that happens before in THELMA AND LOUISE is just impetus driving them to that final flight off the cliff. (Really, any other ending would have flattened the film, as Robin says in a comment response.) That 'leap' is the metaphorical f**k you to everything and everyone - mostly male - who have pissed the two women off in the entire movie (their entire lives). It is also a finger at us - society - but that's understandable. I mean, there comes a time when a woman can only take so much. (Though throughout history, we seem to have 'taken' a helluva lot.) That was my point - in a roundabout way- when I brought up the film at the end of my post about the colorfully named artist Rembrandt Peale's family life and his mother's death when Peale was 8 years old. It was really a throwaway line, but then it made me think maybe I should say a bit more.
I still am amazed it took women so long to take some kind of action against the injustices of a society that, over history, did not seem to value their existence except as sexual objects or brood mares. I'm NOT suggesting we all blow up trucks or shoot anyone or jump off a cliff or even that this action, in and of itself, is devoutly to be wished. Though these actions do occasionally flash through my mind, especially when reading history. Not to put too fine a point on it, I'm sure these actions did flash through many women's minds over the years when faced with little - if any - control over anything important that might, remotely, have have anything to do with their best interests.
But, it occurred to me, while reading about Peale's life, that, of course, 17 children (his mother died when he was 8 after having given birth to 17, only 6 of whom survived) seems excessive to us now. But even then surely there might have been someone who thought that maybe, this was not such a GOOD thing? I don't care how many farm hands you needed in the fields. And in Peale's family's case, there was not even the case. Or did this all come about because medicine was in such an infantile stage (which it really wasn't if you check out the medicinal knowledge abroad in the land in ancient Rome, not to mention, in the Middle East, but that's a story for another day), it was expected that some women would just have to give their lives to populate the earth? And if they didn't like the whole idea - oh well, tough. Jeez, it's a wonder any woman in her right mind ever married.
(Though I'm sure that even now AND throughout history there have been women who thought giving birth to 17 kids or more was/is a good idea. I'm not saying that ALL women must have felt the oppression this implies. I am not speaking for ALL women.)
Thelma and Louise were two characters whose ending was pre-ordained by the depth of outrage the males in their vicinity experienced when affronted by women who dared take offense at the treatment received at their hands OR who dared, occasionally, to laugh at men. (So in a way, the plot is actually driven by the reactions of men.) But Thelma and Louise's understanding of that simple fact is the spur at the end. Most male anger directed at the film appears to have taken affront at the whole idea of women daring to dish men. So as a 'wake-up' call I don't know how successful the thing was. But the film came at a good time, I think. Only because it actually showed women DARING. Not putting up with any more crap than they had to - though in the end of course, it means their destruction anyway. But the film became part of our vernacular and the object of many satirical jabs and pretensions of wit.
Driven by inclination, perhaps even by tunnel vision and by history, these two particular women had no choice but to do what they did: learn to fly. But gravity was against them. Despite what we know happened to that car and those bodies dashed to pieces on the rocks below, the ending does have a sort of dignity and graceful nobility. (After all, we're not actually shown the car falling.) Yeah, women are capable of l'esprit de gare. Maybe that is what rankled men in the audience. That and the unpalatable fact that Thelma and Louise preferred death to being dealt with by the men and the system which held power over them at that particular point in time. I mean, what was wrong with those bitches!?

Email ThisBlogThis!Share to TwitterShare to FacebookShare to Pinterest
Labels: Movies, Thelma and Louise