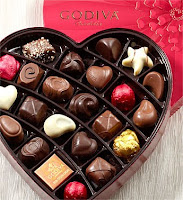 Artwork at the very top of the post is by the one and only: J.C. Leyendecker.
Posted by Yvette at 1:34 PM