Sunday Salon: Writing I Like - From LOST IN A GOOD BOOK by Jasper Fforde 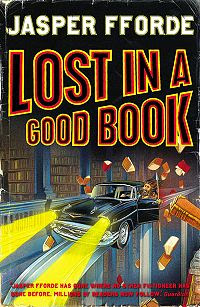 Now and then I'd like to post short excerpts (well, relatively short) from books I've read and loved over the years. I've only done it once before, but I think I'm going to make it a regular thing from now on. Once I have a few of these posts done, I'll make a little doo-hicky on the sidebar so you can find them easily enough if you're of a mind to. Who knows? You might discover a writer whose work you might like to investigate. (As if there aren't enough of them already - right?)

Not going to tell you much about the book, really, because then it becomes a book review which this really isn't. Suffice to say it's one of my favorite books, it's fantasy-lit written by a brilliant, imaginative guy and you won't go wrong reading it. Though if I were you I'd read the previous book, The Eyre Affair, first. But, it's up to you. Find out more about the author Jasper Fforde at his (not like anything else you've ever seen), website. (Shown above are the British and American versions of the cover.)
The character telling the story in the first person is literature detective, Thursday Next.
I closed the book, carefully placed it in my pocket and looked around. I was in a long, dark, wood-paneled corridor lined with bookshelves that reached from the richly carpeted floor to the vaulted ceiling...High above me, spaced at regular intervals, were finely decorated circular apertures through which light gained entry and reflected off the polished wood, reinforcing the serious mood of the library. Running down the center of the corridor was a long row of reading tables, each with a green shaded brass lamp. The library appeared endless, in both directions the corridor vanished into darkness with no definable end. But this wasn't important. Describing the library would like going to see a Turner and commenting on the frame. On all of the walls, end after end, shelf after shelf, were books. Hundreds, thousands, millions of books. Hardbacks, paperbacks, leather bound, uncorrected proofs, handwritten manuscripts, everything.
I stepped closer and rested my fingertips lightly against the pristine volumes. They felt warm to the touch, so I leaned closer and pressed my ear to the spines. I could hear a distant hum, the rumble of machinery, people talking, traffic, seagulls, laughter, waves on rocks, win in the winter branches of trees, distant thunder, heavy rain, children playing, a blacksmith's hammer - a million sounds all happening together. And then, in a revelatory moment, the clouds slid back from my mind and a crystal-clear understanding of the very nature of books shone upon me.
They weren't just collections of words arranged neatly on a page to give the impression of reality - each of these volumes was reality. The similarity of these books to the copies I had read back home was not more than the similarity a photograph has to its subject. These books were alive!
I walked slowly down the corridor, running my fingers along the spines and listening to the comfortable pat-pat-pat sound they made, every now and then recognizing a familiar title. After a couple of hundred yards I came across a junction where a second corridor crossed the first. In the middle of the crossways was a large circular void with a wrought-iron rail and a spiral staircase bolted securely to one side. I peered cautiously down. Not more than thirty feet below me I could see another floor, exactly like this one. But in the middle of that floor was another circular void through which I could see another floor, and another and another and so on to the depths of the library.
I looked up. It was the same above me, more circular light wells and the spiral staircase reaching up into the dizzy heights above. I leaned on the balcony and looked about me at the vast library once again.
"Well," I said to no one in particular, "I don't think I'm in Osaka anymore."
"A visitor!" exclaimed a voice behind me. "What a delightful surprise!"
Posted by Yvette at 2:37 PM

Email ThisBlogThis!Share to TwitterShare to FacebookShare to Pinterest
Labels: Jasper Fforde, Lost In A Good Book, Writing I Like