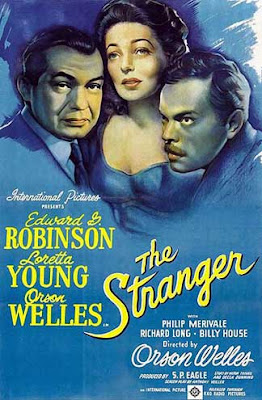 I've seen this movie, directed by Orson Welles, a couple of times over the years and of course the only thing I ever remember was the ghoulish over-the-top ending. But when I saw it again thinking I'd talk about it on the Overlooked Movies meme held every Tuesday I finally realized what a superb botch of a movie it really is.

Here's what I figure: The editing must have been done by committee at the studio. Perhaps Welles wanted to do it and wasn't allowed to? (Wouldn't be the first time.) I don't know the behind the scenes story so I wish someone would let me know what the heck happened to this film. 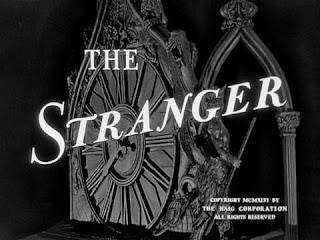 It starts out to be a great story about the hunting down and destroying of a Nazi war criminal who has escaped Germany at the end of WWII. I mean, what could be better? Though the fact that the screenplay has several writers listed and John Huston and Orson Welles unlisted should have been a tip off to what went wrong. But I didn't know that until recently.

First a few words about the casting. 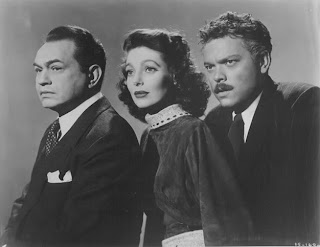 Loretta Young as Mary Longstreet, a naive, newly married housewife (a part usually tailor made for her) is so out of her depth here that she appears even more goggle-eyed and brittle than usual. She always did have a kind of owly look going on, but it worked for her in lighter films and soap opera. Up against a fiend of a Nazi killer, not so much. She looks simple and gullible and very foolish. Of course, that's the way the part is written so maybe it's not all her fault. 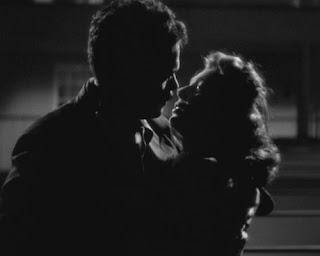 The movie is kind of an odd combination of soap opera and noir thriller. So who knows if any actress could have done any better with the thankless part. And no, the fact that she gets her revenge in the end doesn't make what came before any more palatable.

Edward G. Robinson can do very little wrong as far as I'm concerned. Here he plays Mr. Wilson, a determined Nazi hunter sent from the War Crimes Commission in - I suppose - Nuremberg, Germany, to ferret out and if not capture, kill an infamous Nazi. Wilson's wily single-minded devotion to his mission is commendable, he is the one good thing in the film. Though I question some of his tactics - involving Mary Longstreet's family members in a very dangerous game, for instance - but I suppose any port in a storm is the modus operandi for Nazi hunters. And by the way, why is he sent all alone to track down this most dangerous of escaped villains? An assistant or two would have come in handy. Maybe a bodyguard? But still Robinson makes what he can of the strong-willed, pipe smoking nemesis.

Orson Welles  looks good as the clock fancying new husband, crazed killer and Nazi villain combo. I mean, he practically seethes in every scene. Smoke comes out of his ears. Well, not really, but use your imagination. He is a cauldron of repressed Nazi villainy. He has one great speech at the dinner table in which he talks about the German soul and character, but other than that it's all skulking about, scowling and looking dangerous.(Why he has no German accent is never explained.)

The dinner scene takes place after his marriage to Mary which occurred shortly after Welles (as the newly minted Charles Rankin) has strangled (with his bare hands) a character from his past who has shown up in the sleepy Connecticut town where Rankin has established himself as a gregarious college professor. The victim is a man who had been allowed to escape from prison by the War Crimes Commission in hopes he would lead them to bigger Nazi fish. 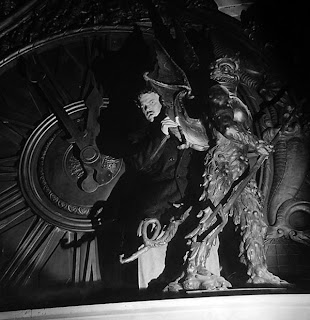 The gist of the story:
Mr. Wilson is after a Nazi kingpin and master planner who has, apparently, escaped into 1946 New England. The trail has led Wilson to a small idyllic college town in the Connecticut countryside. (What are the odds?) Here is where the rest of the story will be played out in dramatic fashion. 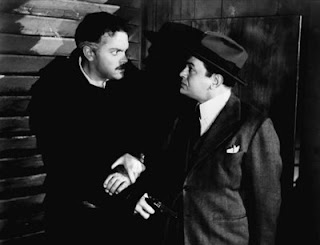 At the center of town, in the square, is a church with an appropriately fancy antique clock in the tower, a clock whose works need fixing. And who else better to tinker with the works than the evil Nazi? Uh, I mean, Professor Charles Rankin, whose hobby is tinkering with clocks. Unfortunately for him, this is also the well-known hobby of the man being hunted by Wilson.

So it's apparent, really, from the first that the story will be a mano-a-mano duel between good and evil. It's nicely set up that way. The innocent looking, sleepy little town bedecked in white clapboard and peopled with checker playing denizens. Nice touches. There's a good scene in a dark school gymnasium and some interesting byplay as Mr. Wilson scopes out the lay of the land. 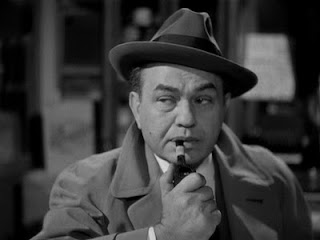 Pretty soon he's narrowed down the chase to Professor Rankin and soon after that, he's wormed his way into the family of Mary Longstreet as a guest of her father, a judge and antiques enthusiast. Soon after that Wilson is enlisting Mary Longstreet's younger brother (played by a sincere but very callow looking Richard Long) in his plans. I think we're meant to know that Wilson is good at sizing people up and taking advantage of what's available. 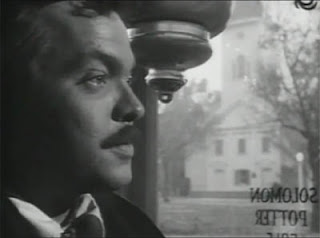 Well, we've seen Rankin strangle a man with his bare hands early on but it's not until he kills the family dog that we are truly made aware of his disgusting villainy - this man will stop at nothing! Before you can say 'now, what', he begins plotting to kill his gullible wife  - he has strung her along with the most absurd of sob stories about his past. She, of course, chooses to believe he is simply misunderstood. Even when Rankin tells her he's recently strangled a man, she decides to run away with him anyway. (She doesn't know, at this point, that he's a Nazi - just a common, garden-variety murderer. But, c'mon, woman, use your intelligence.) I guess she figures what would a Nazi be doing in Connecticut? 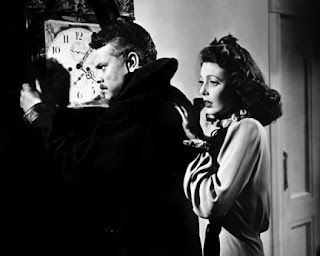 Eventually Mary is forced to realize the true nature of the monster she's married and she does get a measure of revenge. It all occurs in the high reaches of the clock tower where everyone has gone (including the townspeople) to watch the end of the story.

Rankin gets an appropriately ghoulish and bizarre death which is meant, I suppose, to make us feel the satisfaction of good finally triumphing over evil. But can any death really be good enough for a man so foul? Here's the problem: the ending is a botch. Badly edited and not especially well shot, much of the intended shock and awe turns to bemusement. It feels like a grand operatic death without the accompanying music. Well, except for the noise of the clock malfunctioning in the steeple. (There should have been at least an aria or two.) 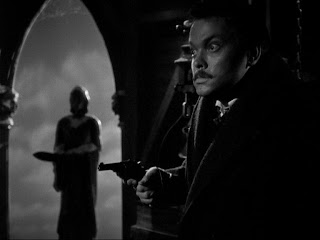 Then, Edward G. Robinson's character makes a flippant remark to Loretta Young's character as he lights his pipe, and the screen goes black. I mean, huh?

I waited for more, but that was it. Obviously somebody none too handy with a scissor had done some heavy-handed slicing and dicing. What else are we to think?

In fact, most of the film is edited in a choppy manner with one scene not necessarily leading to another and occasionally odd camera angles interfering with the action. This is especially apparent in the second half of the film.

The thing that is most bothersome about it all is that it's obvious (despite Loretta Young) this could have been a memorable thriller. A new kind of movie genre: the noir soap opera.

Despite it all, I still say see the movie and make your own judgement. There are elements of it that are affecting and suspenseful. The first half of the film is well enough done. And Orson Welles was always a fascinating screen presence - even with smoke coming out of his ears. Then, of course, there's Edward G. Robinson. Though he's wonderful in just about anything, even he has a hard time saving this one.

But there are some bad films you just have to see for yourself. This is one of them. 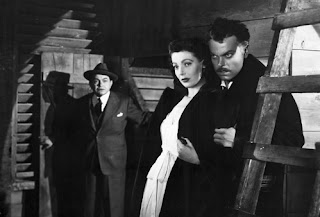