5 Best Books is the weekly meme hosted by Cassandra at INDIEREADERHOUSTON. Each week, it's the best five books on any given topic. This week it's Best 5 Rereads.

I reread books all the time so this is going to be an especially hard category to narrow down to five. I mean, I wouldn't reread a book if I didn't love it to begin with. Know what I mean? For me, a reread is like visiting an old friend. There's just something comforting about the whole idea.

The five books I reread most often:

The first book in the Mary Russell/Sherlock Holmes series is more a book of short connected stories or incidents that establish the meeting and then the growing relationship between Russell and Holmes.

She is a fifteen year old prodigy, as brilliant in her own way as Holmes. He is in early retirement - living in Sussex -though he still does take the occasional case. About a third of the way into the book, when both are threatened by a deadly enemy (for me the most suspenseful and enthralling chapters) with a surprising connection to Holmes' past, then the book coalesces into a novel once again.

Somehow King makes it all work. 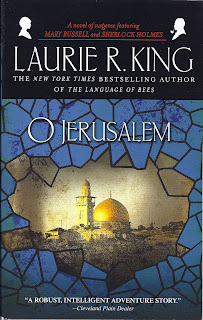 I've forgotten how many times I've read this. I even own the audio and occasionally listen to it as well. This is the book that explains the side trip that Holmes and Russell must take - on the run from a ruthless enemy - near the end of THE BEEKEEPER'S APPRENTICE - a trip whose details are not explained in the first book. However O JERUSALEM is not the second book in the series. It was published later, after A MONSTROUS REGIMENT OF WOMEN, A LETTER OF MARY and THE MOOR. But the story harkens back to the beginning though it works entirely on its own.

I think of this as almost a stand alone novel - Holmes and Russell go to Jerusalem in 1918, to evade an enemy, but also to run an espionage errand at the behest of Sherlock Holmes' secretive older brother Mycroft who works for the British government. While in Palestine (before the Brits left and the country became Israel) they meet up with their contacts, two 'Arab' men with their own secrets - two of King's most memorable characters - who are at first suspicious then outraged when it is explained to them that Russell must pass as a boy, a deception punishable by immediate arrest or worse.

How this suspicion and mistrust is overcome and all four characters grow to depend on one another while while on the hunt for a clever spy master fomenting trouble with the Jews and plotting a major assassination, is a brilliantly told story. You can feel Russell's awe when they enter Jerusalem (she is Jewish), feel the oppressive tension, the inherent troubles of the British occupation of Palestine. King captures the desert setting of the ancient city, you can practically feel the sand between your toes and the dust in your lungs. Of all the books in the series, this one reads the most like an action adventure than anything else.

I love this book. 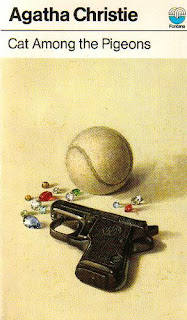 3) CAT AMONG THE PIGEONS by Agatha Christie

There are three or four Christies I reread all the time - this is one of them. What makes this book intriguing is the fact that Hercule Poirot does not enter the story until the last third of the book. He is summoned then by a young school girl who has discovered a treasure hidden at the exclusive Meadowbank private school she attends - a treasure which had led to several murders. A most intriguing book with a wonderful setting: an upper class English school peopled with some of Christie's most unforgettable characters.

It also has one of Christie's more satisfying endings.

4) THE DOORBELL RANG by Rex Stout

I reread almost all the Wolfe books every now and then, but this is the one, I think, I reread most.

This is the book in which Nero Wolfe and Archie Goodwin do the unthinkable, they take on the FBI. Then they do the unbelievable, they win. (This is also the book which probably led to the FBI keeping a file on its outspoken author, Rex Stout.)

When a wealthy woman who is being harrassed by the FBI hires Wolfe and Archie to stop the harrassment, he demurs. But when she tells him money is no object, he weakens. A retainer of $100,000 and the promise of more is too much for Wolfe to resist. Despite Archie's protestations, he takes the case.

How the two with help from the gang: Saul, Fred and Orrie and Inspector Cramer, manage the seemingly impossible, is a joy to read. This story just never gets old.

5)  CROCODILE ON THE SANDBANK by Elizabeth Peters

The first in the Amelia Peabody series and one of several Amelia books I reread occasionally.  When a Victorian spinster of definite opinions travels to Egypt looking for adventure, she shouldn't be too surprised when she finds it in the ominous shape of a mummy run amok.

Just a great first book in one of my very favorite series written as a kind of Victorian melodrama in the style of H. Rider Haggard. You will grow to love Amelia and her 'take-charge' attitude. What doesn't she set to rights?

The book is a lot of fun besides, especially when Amelia meets the irascible and slightly demented archeologist Radcliffe Emerson - the man destined to be her husband.
Posted by Yvette at 11:25 AM