Monday Review: A SMALL DEATH IN THE GREAT GLEN by A.D. Scott 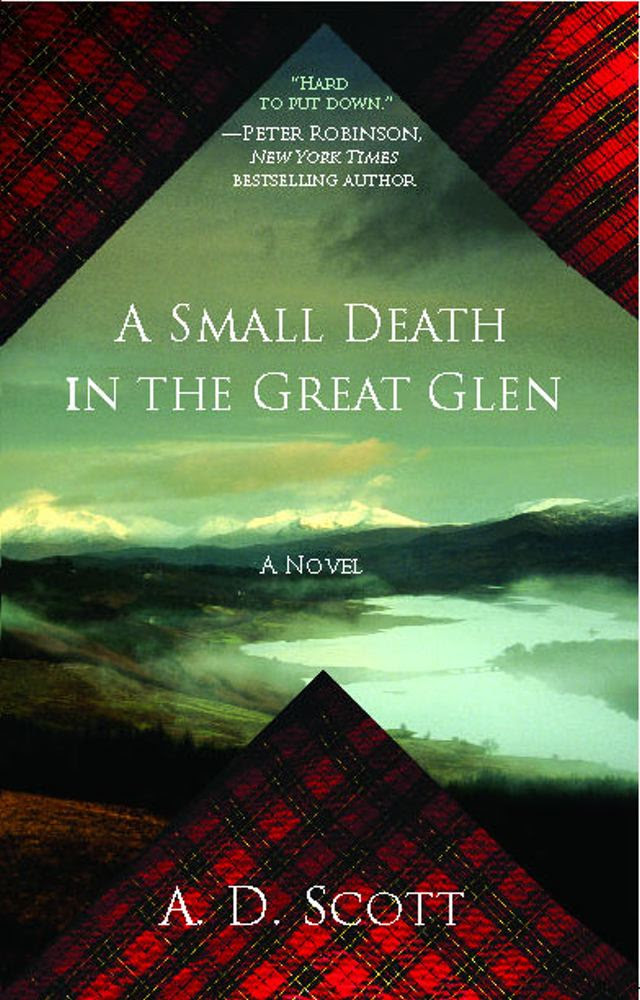 The setting is the real star of A SMALL DEATH IN THE GREAT GLEN: the Scottish Highlands. I'm lucky enough to have traveled there many years ago so in a way, this books takes me back though with far more sinister doings than happened when I visited. (Thank goodness.) If the Scottish Highlands aren't one of the most austerely beautiful and romantic places on earth than I don't know scenery.

The characters who inhabit this Highland setting in A.D. Scott's accomplished debut novel do suffer a bit in comparison since human foibles can hardly compete with the grandeur of the setting, but as a Scottish friend once told me (in a very pragmatic tone) when I waxed ecstatically about the surroundings - "You can't eat scenery."

At any rate, it is 1956, eleven years after the end of the war and the old hurts, suffering and privation are still alive in memory. The hardy townspeople of an isolated village in the Highlands are suspicious of outsiders, even those who have lived in their midst for years. Hurtful gossip and unbending social hierarchy still run rife.

When a small boy goes missing and is later found dead in one of the canals, the local newspaper, the Highland Gazette which has recently hired a new editor who wants the paper to feature more 'relevant' news - decides to investigate. John McAllister has his own sad secrets and the death of eight year old Jamie Fraser stirs anguished memories when he discovers a link between Jamie's death and a death in McAllister's own family.

This first novel is, I think, more about establishing the several characters who will feature in the coming series. The story of the death of a small boy is told from many points of view as each character and their assorted problems and lives are introduced. The primaries though, are the staff of the Highland Gazette. Joanne Ross the part time typist is a mother of two and a battered wife who, as the book begins, considers herself trapped in a no-win situation. Originally not hired as a reporter at the paper, she is soon asked by the dour McAllister to expand her duties. The interesting thing for me was watching Joanne grow as an independent person unable finally to accept her prescribed lot in life.

McAllister and a young reporter, Rob McLean begin their own investigation into the death of the little boy, an investigation that continues even after a very convenient scapegoat is arrested by the burly and unpleasant head of the local police, Inspector Tompson. His arrest of a Polish alien, fresh off a Russian trawler - and being hidden by a local Polish man - seems like a very convenient end to the tragedy. Everyone in town is relieved that the killer isn't one of their own.

Although this is a very engaging and engrossing first novel, it is weakened by the use of so many points of view plus the inclusion of one too many side-stories which take attention away from the central mystery. Though the author does manage to weave a dark strain of unease throughout the story, I found it difficult in the beginning to keep track of who was who and often, the slow pace was at odds with wanting to know what happened next.

The novel is a kind of mix - a mystery which sometimes takes a back seat to the lives of the characters and the life of a village on the cusp of change. It does, however, have a very satisfying powerhouse of an ending.

I'm recommending A SMALL DEATH IN A GREAT GLEN as an auspicious beginning in what I hope will be a very engaging series taking place in a splendid setting. Plus I want to see what happens next to Joanne Ross.

The second book in the series which I plan on reading after my self-imposed library boycott comes to an end.﻿
Posted by Yvette at 3:18 PM

Email ThisBlogThis!Share to TwitterShare to FacebookShare to Pinterest
Labels: A Small Death In the Great Glen, Review