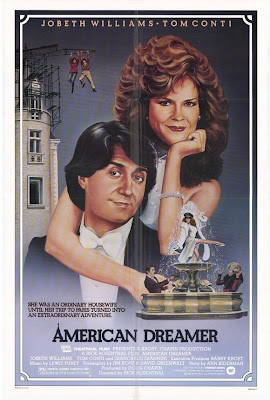 If it's Tuesday, it's Forgotten (or Overlooked) Movies day. This is the weekly meme hosted by Todd over at his blog, SWEET FREEDOM. Take a look and see what other movies other bloggers are talking about on this hot and sunny summer day.

AMERICAN DREAMER, is a 1980's movie farce/spy thriller/romantic comedy directed by Rick Rosenthal. It was shot mostly in Paris so prepare to be wowed by scenery. The film also has the distinction of having been made into a cult hit by women who instantly recognized and immediately sympathized with JoBeth Williams' frustrated housewife.

She plays Cathy Palmer, a suburban American housewife and mother of two who is drowning in a lackluster marriage to Kevin (played in a perfectly obnoxious way by James Staley). He is a smugly complacent business man who prefers the company of his golfing buddies and delights in giving fatuous advice on how to handle women.

Unknown to Kevin, wife Cathy - who yearns for romance and adventure - has written a book and entered it in a contest which promises a trip to Paris for the Grand Prize winner. Her manuscript features the famous fictional character Rebecca Ryan - female equivalent of James Bond - created by best selling author Margaret McCann (played delightfully by Coral Browne), an Englishwoman living in France.

The wonderful Coral Browne aka Mrs. Vincent Price.﻿
When Cathy wins the Grand Prize, a trip for two to Paris - she is overjoyed and can't wait to tell her hubby. They have never traveled to Europe and this is their big chance! But when she breaks the news over his favorite meal, his reaction is less than enthusiastic. He congratulates her 'little' writing project and poo-poos the prize - he simply can't get away from work at this time. Someday they'll get to Paris but not now.

I know, all the women in the audience are like, HUH?!

Kevin thinks he can get away with this outrageous chauvinist behavior because he doesn't really value anything Cathy does - she is simply his wife - he thinks he rules the roost, albeit in a benevolent-seeming manner. This Mad Men-like behavior doesn't get him very far.

Naturally, goaded beyond endurance, Cathy shows gumption and off to Paris she goes - on her own. JoBeth Williams is wonderful portraying a nice wifely type breaking free from shackles and making a daring, possibly life-altering, move.

Once in the romantic City of Lights (photographed wonderfully- which isn't hard), Cathy stays at a little charming side street hotel (with a view of the Eiffel Tower, bien sur). The next day, armed with camera she sets about sightseeing. She is due to attend a press conference/book signing with Margaret McCann - author of the above mentioned Rebecca Ryan books - that same afternoon.

Later, while she's taking a picture of the Nortre Dame cathedral and sighing at its beauty, a purse snatcher on a bike grabs her shoulder bag and takes off, Cathy gives chase. Running across a busy street, she is knocked unconscious by a car driven (we later learn) by the Spanish Ambassador. (This explains his behavior a little later.)

When Cathy wakes up in the hospital, memories of her past life as an American housewife are gone. Somehow, the clunk on the head has convinced her she is Rebecca Ryan, daring spy and star of her own series of books. (Yeah, I know, it's such a silly invention, but it works for me.) She immediately takes on the ultra confident persona of Ryan who is the love 'em and leave 'em equivalent of James Bond. Secretly she departs the hospital headed for the Ritz, where the fictional Ryan 'resides'.

Since she's just missed being killed by a car, Cathy has gotten it into her head that she's currently involved in a spy caper and this was an obvious attempt to get her out of the way. The way of  'what' you may ask, but throw your disbelief out the window and go with the flow.

What happens next is so much fun as Rebecca aka Cathy Palmer, goes on a couture shopping spree - charging it all to Rebecca Ryan (somehow, through confusion with the Ritz Hotel operator, this works)  and there's a cinematic montage of her exiting various French designer showrooms wearing different gorgeous outfits. JoBeth never looked better!

She then meets Alan McMann (Margaret McMann's son played by the charming Tom Conti), who lives at the Ritz. Rebecca storms into his room issuing orders and making plans. She's mistaken him for the fictional Rebecca's assistant Dimitri (I think that was the name - I'm going from memory here), who is her accommodating side-kick in the books. Alan, naturally, thinks Cathy is nuts. But he goes along with her fantasy because she's beautiful and he thinks it's all a gag - maybe she's being paid by one of his friends. His mother is the famous thriller writer, after all.

They then, of course, get mutually involved in a caper involving Giancarlo Giannini as Victor Marchand, an accident-prone government minister whom Rebecca has tagged as a spy. Danger, thrills and life-threatening spills ensue as fantasy becomes reality - at least in the dazed Cathy's mind. There are some hilarious scenes as Rebecca makes a spectacle of herself at a diplomatic ball held in a gorgeous chateau in the French countryside, then disrupts a government meeting where Marchand is giving a speech.Then there's a chase through the dark underground of a cathedral where they witness the death of a priest who has stolen a jeweled relic. It's all very confusing and makes little sense but nobody cares.

The point is that soon enough, Alan comes to believe that there might be something real about Rebecca's (I mean, Cathy's) fantasy. Especially when the bullets start flying.

In the meantime: Cathy having failed to show up at the book-signing/ Grand Prize Winning press conference the previous day, the publisher puts in a call to her husband in the USA. Kevin then heads for Paris to find his missing wife.

From then on it's all twists and turns as Rebecca and Dimitri (Cathy and Alan) stumble into a real spy story and find themselves in deep trouble trying to outsmart an enemy who wants them dead.  Ah, but trouble in Paris isn't the same as trouble in other cities - don't vous pensez?

I have one quibble: the denouement - when Cathy, mid-adventure, realizes who she really is - it's just too dramatically staged and brings the film to a complete, thudding halt. This is the only thing that keeps AMERICAN DREAMER from being a great screwball comedy. But the second ending (in which another secret  pertaining to Rebecca Ryan is revealed ) is quite good enough. In fact, this film has one of the best and most charming last scenes ever.

If you haven't seen this, you're missing a great deal of fun and a trip to Paris, besides.