My Own STAR TREK Next Generation Marathon 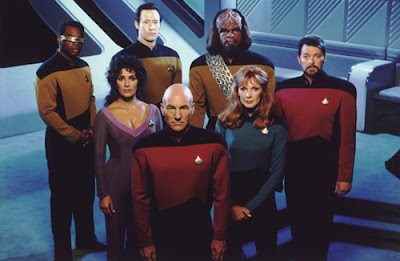 Yup. That's what I've been up to the past couple of days. I am not a purist, so it's not only the first STAR TREK (the William Shatner/Leonard Nimoy years) series that I'm loyal to. I absolutely love STAR TREK The Next Generation. Also loved the newest film, a prequel to the original series.

Didn't even realize that Netflix had the seven years worth of  STAR TREK Next Generation episodes all in one handy/dandy fell swoop of an extravaganza. Yes, they do.

So I've been going overboard cruising NEXT GENERATION which for me really began with the third year or so, maybe the fourth. That's when I began watching in earnest. The earlier years I didn't like as much because Jonathan Frakes (as Commander Riker) didn't have a beard and Michael Dorn (as Worf ) didn't have long hair (I like the later Klingon prosthetics better as well). Simple as that. I also wasn't so crazy about Dr. Crusher's son on the bridge. (Though Wesley Crusher did show up in season four, he eventually was done away with...uh, sent off somewhere. Can't remember. Don't care.) 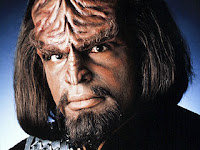 Michael Dorn as Worf.﻿
Much as I love the cast, especially the aforementioned Worf (hubba-hubba), I must say that my main reason for watching is, was and always will be Patrick Stewart as Captain Jean Luc Picard. (All together now, BIG SIGH!) He was superb and should have, of course, won several Emmys if there was any justice and sanity in the world which there obviously isn't. 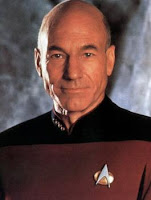 Patrick Stewart as Captain Jean Luc Picard.﻿
There's method to my madness. I am trying to compile a list of my Five (or maybe Ten) Favorite Next Generation episodes and while I mostly remember what they were, I don't remember the episode titles. So I'm going through the shows having a high old time watching.

Eventually, my list will be up on the blog and then we can all dish about our favorites. For those of you unable to appreciate science fiction or for those purists who refuse to accept the later shows (after the original Star Trek) as valid and true, all I can say is, tawk amongst yourselves while the rest of us have some fun. 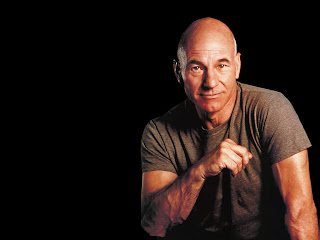 Email ThisBlogThis!Share to TwitterShare to FacebookShare to Pinterest
Labels: Star Trek The Next Generation, Television