From My Shelves: For Dog Lovers Only!

The rest of you - the two or three of you - just tawk amongst yourselves.

WHO'S WHO OF DOGS Extraordinary Lives of Ordinary Dogs - Edited by John R.F. Breen.

The charming little book consists of short capsules - stories collected over many years - each page a highlight of a particular dog.

"The biographies of the dogs contained herein orginally appeared in Who's Who of Animals. They were written by the human friends and colleagues of the dogs, people who had the honor to be in the presence of such magnificent canines for extended periods of time. As you read these biographies, you will see that we are, indeed, priviledged to be aa dog's best friend."

Abiding Faith is a nine-year-old, black and tan Terrier/Doberman/Spaniel/Gordon Setter mix (it all depends on the angle). From head on, she looks like a fox with airplane-wing ears. When she first arrived at the age of seven months, she decided that her job was to fight every dog in sight, so she was taken to 'military school,' where she soon turned into a star pupil. Her best trick is levitating straight up into my arms from a sitting position at my feet.

Buddy (1926 - 1938), a female German Shepherd, was the first Seeing Eye dog. Buddy was born in Switzerland, where she was trained to guide Morris Frank, a young blind American. On June 11, 1928, Morris Frank and Buddy arrived in New York City. The increased independence and mobility that Buddy provided Mr. Frank led to the founding of the Seeing Eye in 1929. Since then, the Seeing Eye, a philanthropy, has matched over 10,000 Seeing Eye dogs with blind people from all over the United States and Canada. In his lifetime, Mr. Frank had six Seeing Eye dogs, all German Shepherds named Buddy.

Zeppo Osborn is a seven year old, seventy five-five-pound rescued brindle Greyhound who, having retired from the fast life, has settled in to to being the best friend his owner Jeff has ever had. Jeff's wife, Maryse, is certain that Zeppo is Jeff in dog form. The Big Guy's favorite words, "road trip," "walkies," and "treaties," cause him to lose all os his normal laid-back composure. Since December of 1992, Zeppo has been a Prescription Pet at the Chrildren's Hospital, where he brings a little cheer to sick kids who can't see their own dogs and his big heart is opened to share.

Brydie is a purebred male Beagle adopted as an adult by James and Sara. Though middle-aged, he has a pretty puppy face. Affectionate and demanding, he howls and weeps when we come home, whether we're gone two minutes or two days. His favorite sport is being chased up and down the halls while we scream "Where is my dog?" in falsetto voices. Other nicknames include Beej, Bugsey, Bugs-A-Mugs, Pooter, and That Boy-That Boy. Brydon is the subject of several songs we have written, including "Let's Go Houndin'," "(He's Justa) Brydon Pooter Boy," and "Do Da Dog Do Da Dog Doo?"

This last one makes me laugh out loud.
Dog people. You gotta' love 'em. 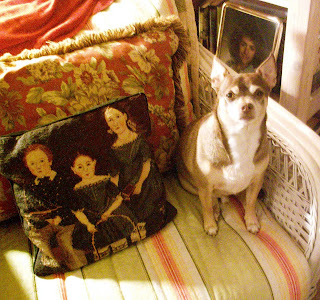 Rocky: The terror...uh, dog who rules the roost at my house.﻿