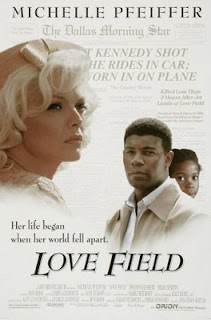 Tuesday's Overlooked Films and/or Other A/V  is the weekly meme hosted by Todd Mason at his blog, SWEET FREEDOM.  Be sure and take a look later to see what other overlooked films and related matters other bloggers are talking about today.

I've seen LOVE FIELD a couple of times and each time I've had to stop what I was doing to just sit and watch. There's something about this film that hooks me and doesn't let go until the final scene. I stumbled upon LOVE FIELD by accident one day a couple of years ago and wondered how come I'd never heard of it before. Just one of those movies that slipped through the cracks, I suppose.

Here's the gist of it: It's 1963 and President Kennedy has just been assassinated. The title, LOVE FIELD, is a play on words, referring as it does to the airport in Dallas where Kennedy had arrived earlier in the day and where, later, his coffin was placed on Air Force One for the flight back to Washington. It also refers to the characters' emotions, I suppose. Though it is not, definitely, a level playing field.

This movie, directed by Jonathan Kaplan, has a lot on its plate: turbulent times, an assassination, race relations, a runaway wife on her way to Washington to attend the President's funeral and forbidden love. Michelle Pfeiffer in platinum blond hair, plays Dallas housewife Lurene Hallett, a woman obsessed with Jackie Kennedy. She'd been at the airport to welcome the President and Mrs. Kennedy that morning and been thrilled to see them up close and personal. 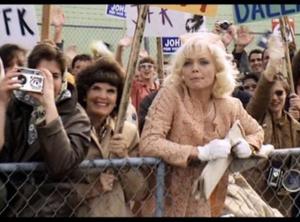 The film has a glittery soap-opera feel to it but that doesn't lessen my enjoyment. Occasionally there can be something very satisfying about soap opera. Warning: Michelle Pfeiffer's performance as the often wacky Lurene takes some getting used to. For the early part of the movie you can't make heads or tails of her - in fact, she is so ditzy, she becomes a horror or a parody of a Southern woman in a frazzle. Her desperation is palpable. 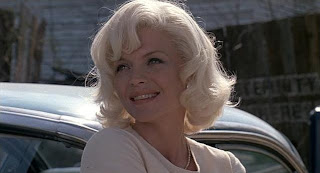 But eventually you get used to her. It's a part that grows on you as the movie develops. And you see that Lurene is really a fish flip flopping on the shore - gasping for oxygen, short changed by life.

After the initial shock of the President's assassination, Lurene immediately makes plans to attend the funeral - it's the least she can do. Her husband Ray, a lout played by Brian Kerwin, has no such intention. So Lurene boards a bus to Washington on her own. 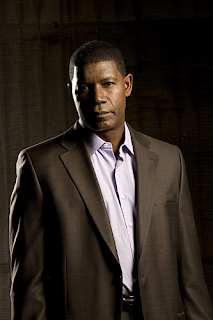 Dennis Haysbert is another passenger. He plays Paul Cater, a man awkwardly reacquainting himself with his small daughter whom he hasn't spend much time with in the past. (I'm not sure but I think he's rescued her from a bad situation and is bringing her north to live with him.) But the little girl's silent unease catches the eye of Lurene who is, at heart, a chatty empathic busybody. It doesn't seem to register on Lurene that Paul is reluctant to speak to her. He is very black, she is very white, they are on a bus traveling through the south. It's 1963, Lurene appears oblivious to the inherent danger. 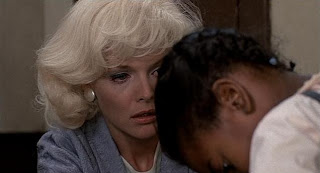 Eventually mistaking the situation Lurene suspects Paul of kidnapping and alerts the police to his presence on the bus. But when she realizes her mistake she helps Paul and his daughter run from the cops and her husband who shows up abusively demanding she return home. 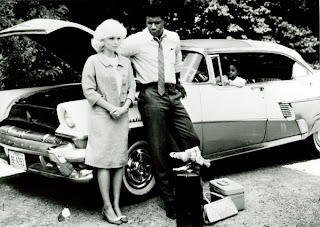 There is constant tension and sense of dread running throughout these scenes as it is clear that just the idea - not to mention a glimpse - of a black man traveling with a white woman is enough to get Paul killed. Where can they go?

They do find a good Samaritan to help them, but that is the rare exception and even she doesn't like the situation especially when she notices the affection blossoming between the unlikely couple.

Forced to move on, Lurene and Paul find themselves at a dangerously impossible crossroads.

I highly recommend LOVE FIELD. Far as I'm concerned, it's a terrific film. A bit glossy, but still an affecting, heart felt story of forbidden love during tumultuous times.

See a slide show of scenes from the film here.
Watch the trailer here.
Posted by Yvette at 10:30 AM