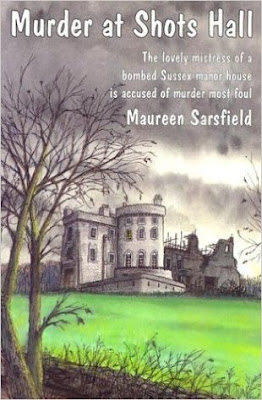 This is the first of only two mysteries written by an author who was herself a mystery. In the introduction to my no frills Rue Morgue copy of this 1945 book (and thank goodness for small publishers like Rue Morgue and a few others for keeping many golden age books from fading away) it specifically states that  after writing a few books, British writer Maureen Sarsfield 'completely disappeared from the literary landscape. Whether she died young, commenced her short career at an advanced age or simply grew tired of the writing life is unknown.'

Had she continued to write, she would have had a great career judging from this first book featuring Scotland Yard Inspector Lane Parry.

In my own biased opinion (just from my one googly-eyed reading of this, her first mystery), she was about as good as any of the hallowed Golden Agers - though her plotting was not up to Christie's, everything else about her work was. That such a significant writer should disappear after two books is a crime against literature. But at least we have the two books to remember her work by.

Am I going overboard with praise? Maybe. But I don't think so. We all know when we're in the presence of someone who knows what they're doing.

WWII is ending and in the small gloomy English village named after the ruined great manor house, Shots Hall, a murderer has poisoned four people - three have died. Living in genteel poverty in the tower half of what remains of Shots Hall, partially demolished by a German incendiary bomb, is the enigmatic sculptor Flikka Ashley (known as Flik) and her Aunt Bee Chattock.

36 year old Flikka is the sort of woman with whom men fall instantly in love though she does nothing to lure them except exist. Inspector Parry, once he's on the case, is definitely not immune to her charms. Neither are any of the men in her orbit, especially grumpy and irascible Doctor Abbot who resents like hell the attraction he feels.

The murders in the quiet village appear to have everything to do with Flikka, since two of the victims (the old housekeeper and the gardener) worked for her and her aunt and the third was a friend, the landlord at the pub. To make matters worse, a local village policeman named Arnoldson, an obnoxious, oily creature, has it in for Flika (she spurned his disgusting advances) and would love nothing better than to hang the crimes around her slender neck.

Lane Parry realizes Flikka is certainly holding back information which might crack the case wide open, it is this reticence that makes her the obvious suspect. Though he's not as sure as Arnoldson that Flikka is the murderer. For one thing - where's the motive? For another, he likes her enormously.

Part of the moody charm of MURDER AT SHOTS HALL is the windswept, damp and rainy weather which whips around the village and the ruined Hall and leaves everything wet and muddy, including the long suffering cops. I had to make a cup of tea to keep me company while reading, so brilliant is Sarsfield's gift for creating setting. I could feel the wind and rain, the cold and the overwhelming sense of gloom and doom.

But it's Maureen Sarsfield's ability to create memorable characters which impressed me most. Her talent is so refined that I would have suspected she'd been writing for years if I didn't know better. Flikka herself and her friends and neighbors are instantly alive in these pages. My favorite character being the surly Dr. Abbot of whom I grew very fond. But there's also outspoken Aunt Bee, the thirty-something group of oddly assorted friends, Inspector Lane Parry and the local and sickly police Superintendent, his four dogs and charming wife, the various cops, and the dithery spinster, Miss Merridew.

Hard to believe any one of them hates Flika enough to kill three innocents just to see her hanged for the crime.

Though the author breaks the story into different points of view, she handles it well and I didn't resent this technique (which I usually do) at all. In fact, in this case, I enjoyed the way it was done.

From the first page to the last, I was - dare I say it? - enthralled. I know it's a cliche, but here it is: I could not put this book down. I am very, very eager to read the second book in the Lane Parry series, MURDER AT BEECHLAND published in 1948. Somewhere out there, there is a copy waiting for me. 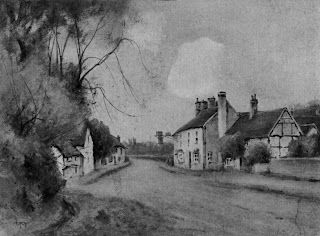