One Of The Best Comedy Shows EVER!

The show starred Sid Caesar, Imogene Coca, Carl Reiner and Howard Morris + guest stars. Every week these four accomplished lunatics would perform in hilarious skits and routines which, if you weren't careful, would have you rolling on the floor with laughter. I mean, we would laugh until we cried. I can't remember how many times I actually fell off the sofa laughing, but there were plenty. I was a kid then, but even I knew I was in the presence of genius. 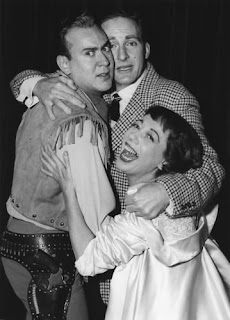 Some of the skits are available on YouTube on rickety looking tapes - too bad that the show's producers didn't have the foresight to film the show, the way Lucille Ball and Desi Arnaz would film I LOVE LUCY beginning in 1951. Oh well, no use crying over spilled milk.
Never thought I'd see myself writing this but - thank goodness for YouTube. Ha! (Though there's really not a whole lot of the show to see online.) 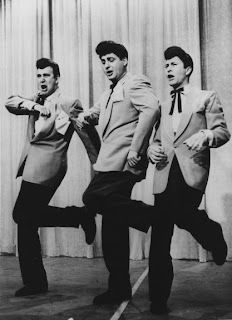 Watch the Three Haircuts do their stuff.
Some of my favorite SHOW OF SHOW skits were the ones in which the cast pretended to be speaking or singing foreign languages but were actually spouting gibberish instead. I know, I know, in today's politically correct world that sounds horrific, but thankfully, back then, we didn't know any better. We laughed in our innocence because it was very funny.

The cast actually sounded as if they were speaking Italian, or French, or Hungarian or whatever. And they always looked as if they were just having the best time. Caesar, especially, who'd grown up in a Jewish neighborhood with different European accents flowing in and out of the restaurant where he waited tables as a kid, was an expert mimic. The rest of the loony cast followed suit. 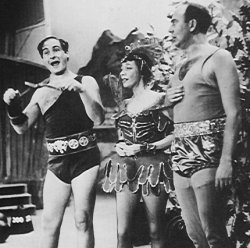 They sometimes did parodies of opera in full costume which I always looked forward to. They did THE MIKADO, romantic operettas, grand tragedies - nothing was sacred to them - in the original languages, except not. I have never seen anything funnier. Here's the thing: they did it all perfectly seriously, they were not mocking the originals, they were performing them - more or less. It was this nonsense that first introduced me to opera. Somehow, I became intrigued and went on to discover one of the great musical joys of my life.

Many years later I managed to call in and speak with Sid Caesar on the old Phil Donahue Show - before Oprah - and told Sid how much his work meant to me and how his old opera skits had turned me on to real opera. He was a bit surprised by that. It was a thrill to talk to him, let me tell you. 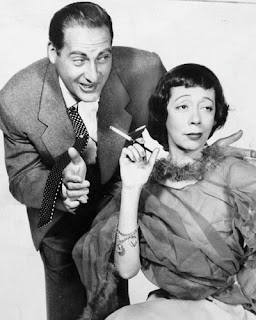 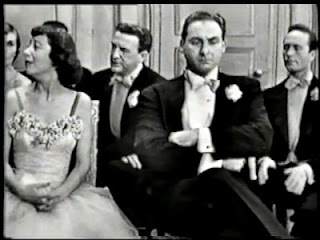 The sheer brilliance of the show was this: NOTHING was beyond, Sid or Imogene or Carl or Howie. They would and could do ANYTHING. They would throw themselves into each skit as if it were all that mattered. If something went awry, they ad libbed. In fact, much of what went on was ad libbed. When something worked extra well, they went with it. They were fearless. My feeling has always been that all four must have been prodigiously intelligent and it was just the luck of the draw that brought them all together at a set place and time in history. For our benefit, of course.

Imogene Coca (1908 - 2001) was the good natured foil of many a skit. She had a kind of odd frailness about her that somehow drew you in. She appeared innocently snared in the general craziness while at the same time enjoying the heck out of the thing.

Occasionally she was called upon to play a floozy (usually with fish net stockings), she threw herself into the part and was always hilarious. Her allure was mystifying, but it was there. Somehow she held her own with the rest of that incredible cast, three of the biggest ego-centric hambones ever created.

Sid Caesar (1922 - ) - the more obviously driven of the four (and I always suspected, the shyest) - was always the leader in whatever havoc they were causing that week. He was the one in control - the glue that held the thing together even when calamity threatened. Where he went, the others followed. They could not have picked a better head honcho. Next to Imogene Coca, I believe he was the most fearless of the bunch. 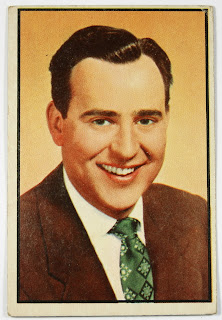 Back then Carl Reiner (1922 - ) seemed to me to be a guy born to play second banana and conscious of the fact though perhaps not altogether happy with it. However, he gave everything he had to the show each week He was superb in whatever he did - mostly because he would do the craziest things and always look as if it were all perfectly normal. That was his gift. 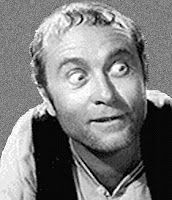 Howard Morris (1919 - 2005) was a born character actor, born to play third banana and didn't seem to mind it a bit. He was perfectly happy stealing scenes from the other three (which he did often). Of the four, he appeared to enjoy the audience laughter most.

To read about Sid Caesar (still alive and kicking at 88), his life, career and early television work, please check out his pretty comprehensive Wikipedia page.

To watch a Show of Shows skit, From Here to Obscurity, go here.

To watch another classic skit, The Clock, please go here. 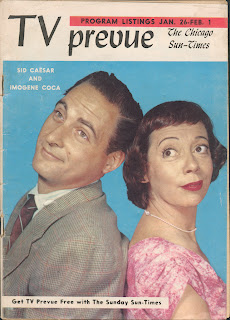 As an added bonus: Don't forget to catch Peter O'Toole in the classic comedy film MY FAVORITE YEAR based on the last year of YOUR SHOW OF SHOWS, 1954. Here's the trailer.

Email ThisBlogThis!Share to TwitterShare to FacebookShare to Pinterest
Labels: Classic Television, Your Show of Shows