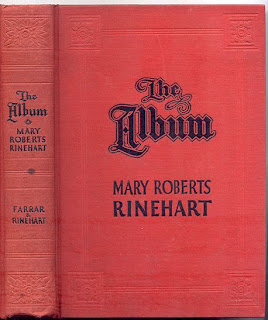 If it's Friday, it's Forgotten Book day. This is the weekly meme hosted by Patti at her blog, PATTINASE Don't forget to check the link to see what other Forgotten Books other bloggers are talking about.

Even if the title is a bit misleading, THE ALBUM is certainly one of Mary Roberts Rinehart's best. I got my hands on a first edition with the original pen and ink gallery illustrations of the of characters. No dust jacket and it's a library copy, but I don't care. I loved holding and reading the thing. (I love the thick paper used in these old hardcovers.) I

THE ALBUM is one of those atmospheric mysteries full of suspense and dreadful doings among the 'genteel' upper classes in an early 20th century Midwestern town. (I'm assuming mid-west, but it could just as easily be Pennsylvania or upstate New York. The exact reality of the setting is never made clear.)

Couldn't find a really nice copy to show you, but John over at Pretty Sinister Books had a cover scan in his files. Thanks, John!

I'm currently reading three Mary Roberts Rinehart books (in a handy anthology) during meals so as not to interfere with my other reading. Hey, it's my way. She is one of the Golden Agers I've been reading and enjoying for awhile - every now and then I binge on her work. Not everything she writes is choice, but enough of it is to make the effort of looking for her books worthwhile. I'm really crazy about her novels. Turns out that most of her work is available in e-book format for pennies. Not for me, but it's good to know if you don't mind reading from screens.

My favorites of Rinehart's books, so far:

******************************
We had lived together so long, the five families in Crescent Place, that it never occurred to any of us that in our own way we were rather unique. Certainly the older people among us did not realize it; and I myself was rather shocked when Helen Wellington, after she married Jim and came there to live, observed that we all looked as though we walked out of an album of the nineties..
"Including that iron clamp the photographers used to use to hold the head steady," she said. "You're a stiff-necked lot, if ever I saw any."

I dare say she was right. Not long ago I was looking over the old red plush album which played such an important part in solving the crimes of which I am about to tell...

...Just how unique we were, however, none of us, including Helen Wellington herself, probably realized until after our first murder. Then, what with police and newspaper men digging about our intermingled roots, it began to dawn on me that we were indeed a strange and perhaps not very healthy human garden.

The story of the society enclave known as The Crescent is revealed by the book's first person narrator, 28 year old Louisa Hall. She is a dutiful only daughter who has given up dreams of marriage to live in a kind of  psychological servitude to her steel-willed mother, a widow still in complete mourning twenty years after the death of her husband. The Crescent is an exclusive housing development. Five large homes with manicured lawns, tall trees and privacy hedges located on an isolated semi-circular dirt road.

As I said, a genteel sort of place. Until bed-ridden Mrs. Lancaster is hacked to death with an axe.

Several more murders follow and it's clear almost from the beginning that the killer must belong to one of the five families that live in The Crescent.

A dark, moody, murderous tale with an ending that makes for a grim surprise.