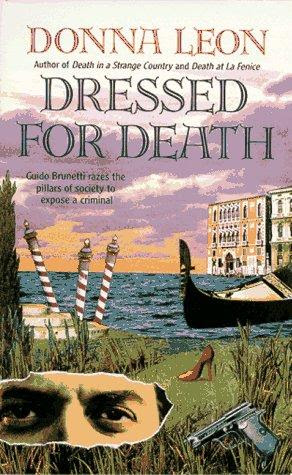 August is an almost unbearably hot and humid month in Venice where air conditioning seems not to be the norm and open windows fail to catch even a hint of the Adriatic breeze. Commissario Guido Brunetti, his professor wife Paola and their kids are on the verge of going to the mountains for a well-deserved holiday when, not unexpectedly, murder interferes with their plans in this, the third book in the on-going series written by American ex-pat and expert in all things Venetian, Donna Leon.

Sending a disgruntled Paola and the kids ahead with promises of trying to join them later, Brunetti must go inland to Mestre, where an unidentified man has been found beaten to death, his body deposited just outside a slaughter house. Since the body was dressed in a cheap red dress and high-heeled shoes, it is assumed at first, second and third glance to be that of a transvestite - one of many who ply their trade in that particular area. Killed by his john, most likely.

But something about the murder makes Brunetti - Donna Leon's engaging and intuitive Italian cop - cautious to jump on the bandwagon. When the body is finally identified as that of an upstanding director of the Banca di Verona, his death sensationalized by the tabloid press, Brunetti finds himself working a case that will place him and his investigators in the path of a ruthless killer.

The list of suspects runs the gamut from the transvestite prostitutes who ply the streets - those whose clients are working men who stop by before they head home to their wives and kids - to a beautiful male courtesan whose acute nervousness alerts Brunetti, to another director of the same Banca di Verona, all too helpful to reveal a startling confession made to him by the dead man, to a member of the higher echelons of society, the Venice director of La Lega della Moralita, a suave lawyer who may or may not be hiding his own secret life.

How Brunetti must tip-toe around the mine field that is Patta's personality while daring to continue to
investigate the upstanding lawyer who heads the mysterious church related charity known as La Lega della Moralita shows admirable cunning, finesse and intelligence - the things that make Brunetti a great cop. The rather obvious irony of a member of a group whose main reason for existence is to 'protect morality' and administer to the deserving poor, being suspected of the most venal of crimes is par for the course in Brunetti's world.

While Venice steams, he attempts to stay cool as the frustrating case careens to a dead end and the reputation of a good and solid man lies in ruins. But at least Brunetti eats well. The copious amounts of delicious Italian food described by the author is enough to send the reader foraging in the kitchen. Pasta and a simple tomato sauce, not to mention a dessert of plain sweet figs, has never sounded so good.

Donna Leon is a master at maneuvering the convoluted Italian police system as well as the quagmire which is Italian politics. Brunneti must always keep the niceties of politics in mind when attempting to discover the often dangerous and murderous truth of a situation.